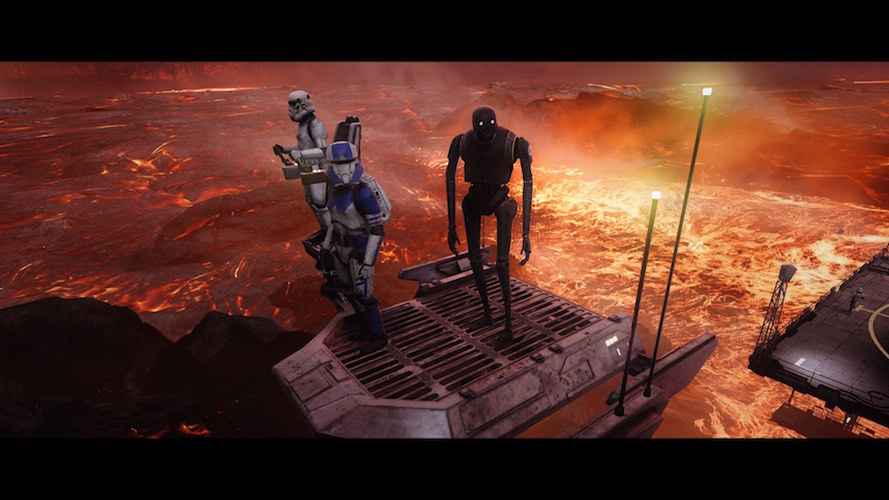 In the Star Wars movies, people travel the galaxy, fighting evil and having all sorts of adventures. In the real world, most of us never leave Earth’s atmosphere—but why should we let reality hold us back? Now aspiring intergalactic travelers can try the Star Wars world on for size at Downtown Disney’s new “hyper-reality” attraction, The Void.

The Void offers fully immersive virtual reality experiences, and it partnered with Lucasfilm and immersive entertainment firm ILMxLAB on their latest one, Star Wars: Secrets of the Empire.

“Something as pioneering as this cannot be done alone. It takes people with shared vision, but it takes people with lots of different expertise,” says Vicki Dobbs Beck, executive in charge at ILMxLAB. After launching in London and Orlando in mid-December, Star Wars: Secrets of the Empire opened today at Downtown Disney in Anaheim.

The story is set between Star Wars episodes III and IV. On a viewscreen, Cassian Andor (Diego Luna) calls on his fellow rebels—a.k.a. Secrets of the Empire ticket holders like me—for help, urging us to take on a mission involving a mysterious package. Despite my lack of galactic battle skills, I couldn’t say no to Diego Luna, so I immediately suited up in a VR helmet and vest to do his bidding.

Just like that, Earth was gone, replaced by a world I’ve only seen in movies. Disguised as Stormtroopers, my teammates and I headed into enemy territory. When I stepped onto Mustafar and felt the heat from the lava, my mind was officially blown. The air even smelled different than it did inside the ship. I didn’t expect to be very good with a blaster and, truth be told, I wasn’t, which gave the bad guys plenty of time to fire at me. They hit me multiple times, and I felt every blast, but my Stormtrooper suit seemed to protect me from feeling any actual pain. (The blasts are more like localized vibrations.)

On The Void’s website, it’s described as “virtual reality you can feel,” and that’s exactly what makes it so good. Diana Williams, story group executive and content strategist at ILMxLAB, says, “The fact that you can smell and touch things and walk… We’re using the phrase ‘Step into the story’ a lot, but it’s true, because you can’t do that in any other medium the way that you can at The Void.”

You can talk to your teammates during the adventure using your VR helmet, but you’ll also want to discuss it with other players afterward, because each team has a slightly different experience. “There’s lots of what we call ‘Easter eggs,’ so every time you go, you can discover something new,” says Cliff Plumer, CEO of The Void, adding, “We want people who are true Star Wars fans to say, ‘Hey, I wonder if that would work…’ and it does—or still enjoy solving the puzzle and discovering all of those sorts of things.”

Tickets ($29.95) are available online, but several days in the immediate future are already sold out. Ages 10 and over are welcome, but guests under 16 need a parent or guardian to sign a liability waiver.

RELATED: Here’s Everything We Know So Far About Disneyland’s New Star Wars Attraction