Home Art These Artists Made an Entire Hotel Out of Cardboard 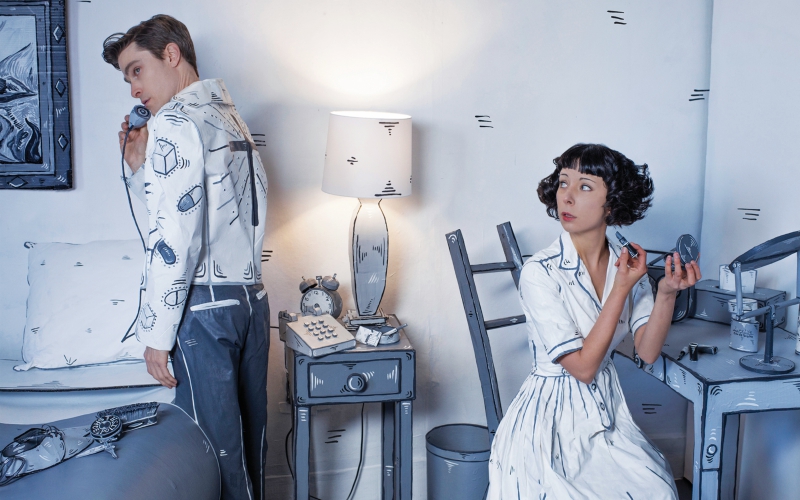 Last December, Dosshaus released an album with the indie label Sympathy for the Record Industry, only you can’t really listen to it. The double seven-inch, called Paper-Thin Hotel, is made entirely of cardboard. The concept would be weird if Dosshaus were a band, but it’s not; it’s the pop art project of Zoey Taylor and David Connelly, artists whose material of choice is cardboard. The album shares its name with Dosshaus’s latest solo exhibition, at Corey Helford Gallery in Boyle Heights (April 7 to May 5), which brings a 2,000-square-foot flophouse to life: Rooms separated by “paper-thin” walls are filled with the pair’s optically confounding, cartoon-like sculptures painted in black, white, and gray (a Bonnie-and-Clyde-themed space features a cardboard suitcase full of money, cardboard wedding rings, and cardboard newspaper clippings, among other lovers-on-the-run ephemera).

“When people cross that line in to our installations, it’s the idea that they’ve stepped into a two-dimensional illustration come to life in three dimensions,” Connelly says.

Like any good creative relationship, Dosshaus was born of mutual cultural obsessions (an obscure 1960s French TV show provided the initial spark). New Mexico-born Taylor and California-raised Connelly both identify as “frustrated, we-do-everything type of artists,” or so the latter puts it—sculpting, painting, photography, fashion design—leading them to try different media to see what felt right. In 2012 they experimented with paper for a stop-motion animation project. Cardboard was a natural extension. “It took several years and a lot of trial and error once we discovered what we could do with cardboard,” Taylor says.

The Inglewood-based couple, who early on would forage worthy scraps from L.A. alleyways, didn’t exhibit a single item in a gallery until 2015. (But it was a doozy: a life-size car parked outside Chinatown’s Gregorio Escalante.) They’re not the first of this breed—they’ll tell you about Frank Gehry’s ’70s cardboard furniture and Picasso’s cardboard guitar—but they’ve forged a style that’s at once unique and totally familiar. “I think when an artist chooses to work with cardboard, you pretty much have to go your own way,” Connelly says.

Visit the Paper-Thin Hotel and you may see one or both of them in elaborate sculpted costumes, playing characters in the exhibition. And while patrons of the cardboard arts (read: shipping businesses) donate to Dosshaus these days, the pair is not above going about it the OG way. “We still collect from alleyways if we see a good box,” says Taylor.