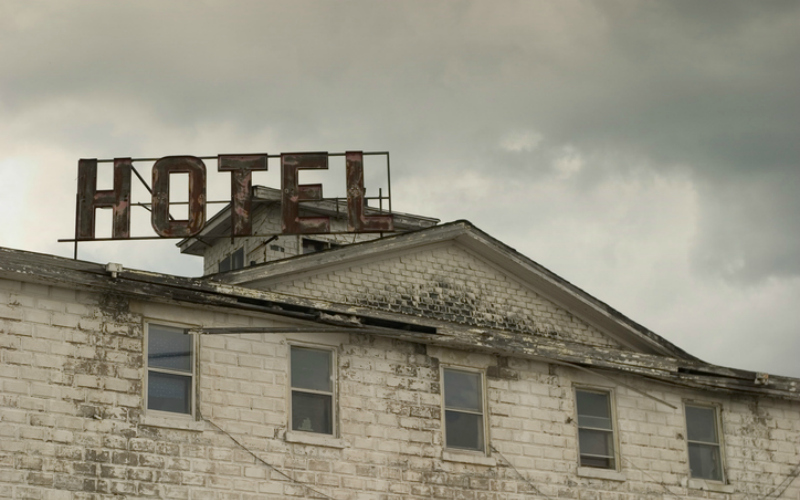 “Do Not Disturb” is a phrase absent from Ryan Murphy’s vocabulary. The American Horror Story creator’s sinister, small screen anthology included a chapter titled Hotel—a theme, Murphy revealed, inspired by the grisly goings-on at downtown L.A.’s own Cecil Hotel (now Stay on Main). “There was a surveillance video that went around two years ago that showed a girl getting into an elevator in a hotel that was said to be haunted, and she was never seen again,” he said at a press event in August. The girl in question was tourist Elisa Lam, whose body was later found in one of the four water tanks atop the inn’s roof. Before that tragedy, a number of cold-hearted creeps called the Cecil home—including serial killer Richard Ramirez, aka the “Night Stalker.” Murphy’s Hotel Cortez has plenty of source material, but there are a number of other L.A. lodgings with sordid pasts.

According to local lore, the spirit of a comedian gone too soon lingers in Bungalow 3: John Belushi died of a drug overdose there in 1982; years later, a child staying at the hotel was allegedly found in the Bungalow, laughing alone. When his parents asked what made him laugh, he pointed to Belushi’s picture and said, “the funny man.”

Marilyn Monroe’s reflection has been spotted in the Roosevelt’s lobby mirror several times since 1985. Rumor has it the antique looking glass—where Monroe reportedly checks her perm and applies lipstick—once hung in suite 1200, where the screen siren often stayed.

For ten years after his death on October 31, 1926, Harry Houdini’s wife made an attempt to contact him in the afterlife. On October 31, 1936, the widow held her final séance on the roof of the Knickerbocker. According to one reporter in attendance, the only “sign” of the evening was the sound of impatient car horns eleven floors below.

After Whitney Houston’s death in 2012, police removed every item from the room where she was found, down to the numbered placard (434) on the door. The chamber remained vacant for over a year, but in 2014 it was prepped to return to the hotel’s rotation: outfitted with unused furniture and a new number, guests may not be aware that they’re staying in the same room where the singer died.

RELATED: How a 13-Year-Old Boy Brought Down L.A.’s Most Notorious Serial Killer

Scene It Before: Hotel Cortez from American Horror Story: Hotel

My LA to Z: Doug Jones