Home Film Donald Trump’s Presidency Has Been Stranger Than Any Fiction Hollywood Has Whipped... 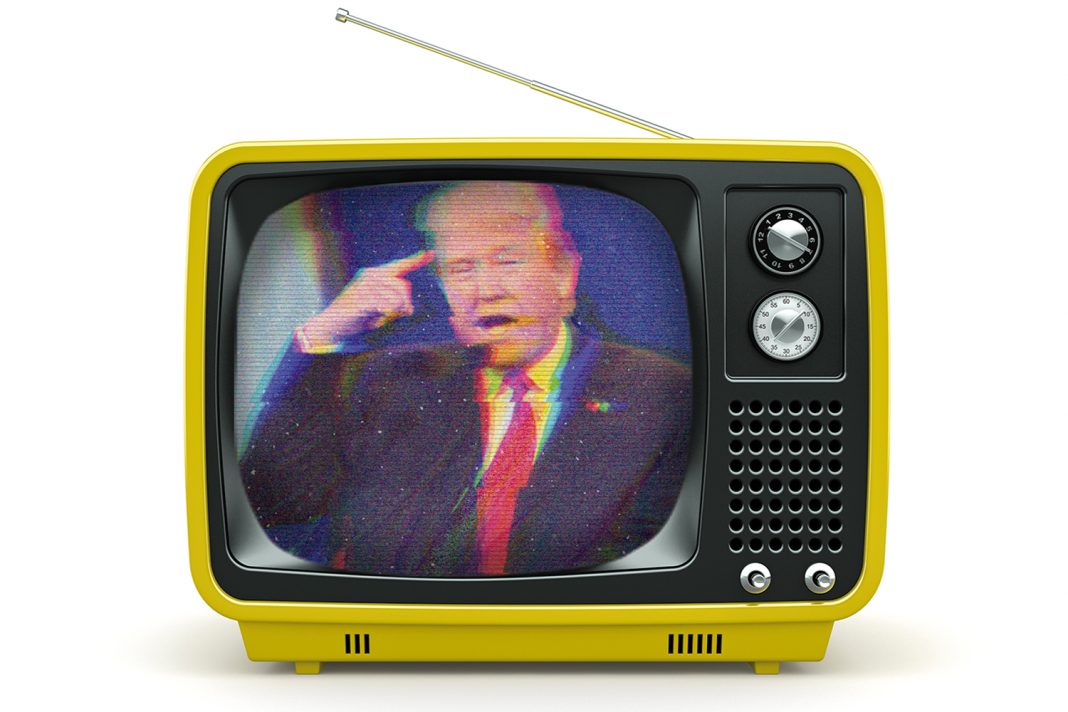 Television made Donald Trump into a reality star, but if he had been cast as president of the United States 20 years ago, it would have been on a sitcom along the lines of Veep. His increasingly unhinged appearances make even Julia Louis Dreyfuss’s character look supremely competent, and it’s unlikely any screenwriter could have conjured up the mix of comedy and cruelty that characterizes this presidency, now sputtering to a finale in which unidentified troops crack down on protesters and we bumble through a pandemic while the president golfs.

There weren’t many fictional presidents before TV or during the first 40 years of movies. This was partly because the movies grew up with Franklin Roosevelt, who was president so long that it was impossible for audiences to imagine someone else in the job. Paradoxically, we started getting fictional presidents around the time we elected movie-star-handsome John Kennedy. Since then, big- and small-screen presidents have largely broken down into three types. Before JFK, the Studly, Two-Fisted President would have been unthinkable. We wouldn’t have had Michael Douglas telling his political foes to fuck off in The American President, Bill Pullman telling invading aliens to fuck off in Independence Day, or Harrison Ford telling terrorists to get the fuck off his plane in Air Force One.

Notwithstanding such hunks-in-chief, the archetypal default has been Moral Leader of the Free World. Henry Fonda was the original; in 1964’s Fail Safe, he had to nuke New York in order to save the rest of humanity. More recently, regardless of the film, the Moral Leader of the Free World is Morgan Freeman. So often has he been God, Nelson Mandela, and the voice of reason in documentaries and ads, that the presidency is, if anything, a step down. Surprisingly, he’s held the office in only two movies: Deep Impact and Angel Has Fallen.

Even the most fevered Hollywood imagination, however, has never conceived of a president as crazy, clueless, and cynical as the one given to us by real life and democrazy.

In movies and TV, moral authority will, forgive me, trump inexperience. Obscure employment counselor Kevin Kline showed that a bit of humility and compassion was enough to run the country in Dave, and teacher Mary McDonnell showed that a bit of perspective and steel was enough to run the galaxy in Battlestar Galactica. But moral authority can be complicated in a world where not everyone plays by the same rules, as the first African American president of the U.S., Dennis Haysbert, learned on 24. On seven seasons of The West Wing, Martin Sheen straddled the tawdriness of the Clinton years and the recklessness of the Bush years. He was a philosopher-warrior who went so far as to hide a debilitating disease and an unlawful assassination that would avert a 9/11-style attack. Despite his flaws, he was a good guy, the ultimate fantasy president for many Americans.

Sheen brings us to type three, the Nightmare President. Fifteen years before West Wing, he played an evangelical blowing up the world in Dead Zone. Also blowing up the world—not by way of fanaticism but ineptitude—were Peter Sellers in Dr. Strangelove, meekly trying to soothe his Soviet counterpart back from the nuclear ledge; and Jack Nicholson in Mars Attacks!, easily dispatched by Martians with a joke hand buzzer set on lethal. Somewhere between poles of craziness and cluelessness was House of Cards’s cynical power couple, Kevin Spacey and his wife, partner, and bitterest rival, Robin Wright.

Even the most fevered Hollywood imagination, however, has never conceived of a president as crazy, clueless, and cynical as the one given to us by real life and democrazy. If Trump has a fantasy prototype, it’s from the ’60s cult classic Wild in the Streets, in which Christopher Jones stars as a talentless, womanizing rock star who exploits his base, rises to power by pitting half the country against the other, betrays everyone he has seduced, relentlessly lets loose his raging inner child, and kills his kids’ pets. Onscreen and off, it’s time for grizzled old luminaries to make a comeback. Doesn’t the aging, congenial, and eternally decent Tom Hanks remind you just a little of someone running for president now?

Answering Your Questions About How to Vote in Los Angeles