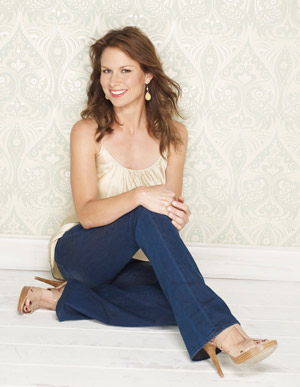 Ginger has had a miserable morning, courtesy of the global positioning system in Mary Lynn Rajskub’s Honda. The 37-year-old actress correctly punched in their destination, a ranch in Malibu, where her tawny two-year-old briard was to receive an introduction to the art of sheepherding. The GPS, however, sent them through endless miles of winding mountain roads that led only to the dog’s becoming carsick in the backseat. Abandoning course, they had to circle around and trace an alternate route that got them here, nearly an hour late. “I was supposed to be in Beverly Hills for meetings later today,” says Rajskub. “Now my car’s a mess.”

The misadventure might bring a snarky smile to the lips of Chloe O’Brian, the brilliant, socially clueless computer expert Rajskub portrays on the Fox series 24. Chloe has remotely tracked down terrorists, rogue operatives, and suitcase nukes through the streets of Los Angeles with greater ease. The show has turned Rajskub into an object of cultural affection for eggheads and neocons, so much so that when she was invited to speak about terrorism and the media at the Heritage Foundation, moderator Rush Limbaugh surprised her with a kiss on the lips. In current episodes the actress gets billed second only to Kiefer Sutherland, who stars as superagent Jack Bauer.

“My friend, who’s the assistant director on 24, has a dog called Bauer,” says Rajskub, who pronounces her name “rice cub.” “She had taken Bauer sheepherding. I remember seeing the pictures and thinking, ‘Oh, I want to take Ginger, because Ginger was doing that to people—herding them.’?” Though Ginger has never set eyes on a flock before, the dog’s talents run in her veins: Briards were tending sheep for French peasants hundreds of years ago. The herding lesson will give her an opportunity to do what she was bred for—and provide her a more appropriate outlet than the actress’s friends and family.

Outside the gate of a whitewashed corral, Rajskub introduces herself to a sturdily built woman with a metal staff and a CAT trucker hat. Janna Duncan has helped many a canine find its inner self. She’s all optimism as she ushers Rajskub and Ginger into the corral, where five ewes and one gelded male huddle in the distance. “Everything is new to them,” Duncan says. “The dogs don’t know what their instincts are. What I like to do is have them explore those instincts and carry them out.”

In her crimson boots, paper-thin jeans, and oversize sunglasses, Rajskub is that rare actress who looks far more glamorous in person than she does in performance. As Chloe, she is usually draped in unflattering sweaters and drab long-sleeved shirts, her brow constantly furrowed and her eyes rolling in their sockets while she endures the stupidity of her counterterrorism coworkers—the tableau of displeasure framed by flat, mousy hair.

The sheep baa almost contemptuously at Ginger, who, for the first five minutes in the corral, seems intent on gluing her flank to Rajskub’s jeans. Then nature takes over, and the dog assumes command, circling the sheep, feinting, chasing strays and nipping them on the rear until they rejoin the fold. “Wow!” says Rajskub, tracking Ginger with her iPhone as she outmaneuvers a wayward sheep. “She’s doing it! She’s doing it!”

The daughter of a pipe fitter and a pharmacist’s technician, Rajskub grew up in suburban Detroit before moving to California, where she studied at the San Francisco Art Institute. “I wanted to act,” she says, “but I didn’t want to go to school for acting or be around actors.” For a performance class, Rajskub staged a few pieces that she thought of as serious but that received mostly laughs. Relocating to L.A. in the early ’90s, she developed a comedy routine centered on a performance artist named Mary Lynn Rajskub, who might announce to the crowd that she’d just popped some ecstasy, then proceed to cover her fully clothed breasts and crotch with packing tape and mutter about the spaces between the teeth of a comb. “I was really uncomfortable and nervous going onstage,” Rajskub says. “The act would be me trying to say my name and trying to talk, and I’d get laughter from being uncomfortable. Then I would talk about how I shouldn’t be onstage, but if I were to come onstage…”

All the unease has made Rajskub a living, not only on 24 but as a hapless beauty pageant helper in Little Miss Sunshine, as Adam Sandler’s sister in Punch-Drunk Love, and as Harrison Ford’s secretary in Firewall. In this month’s Sunshine Cleaning, Rajskub plays a melancholy blood-bank employee who mistakenly believes Emily Blunt has a crush on her, and come summer she’ll appear as Amy Adams’s best friend in Julie & Julia. Nora Ephron wrote and directed the adaptation of Julie Powell’s memoir, about how she cooked 524 of Julia Child’s recipes in one year and lived to blog about it.

Between projects Rajskub is piecing together a film that chronicles her deadpan stand-up routines. She is also getting serious about her recreational painting, now that she’s signed with an agent. “I do sort of colorful abstracts,” Rajskub says, “that are like emptying the contents of my brain onto the canvas.” She has a small studio at her home in Woodland Hills, which she shares with her boyfriend, personal trainer Matthew Rolph, and their seven-month-old son, Valentine. Following long relationships with the comedian David Cross and the composer Jon Brion, Rajskub can appreciate the benefits of a romance not fettered to the entertainment industry. “It makes me feel more grounded, not necessarily propelled forward,” she says. “I was probably driven by insecurity in the past, by the need to be validated by creative people.”

Despite Ginger’s growing fatigue, she presses on with her work. When she snaps too forcefully at an ewe, the herding instructor steps toward her to regulate, not to stop, the aggression. “They have to get tough with big flocks,” Duncan tells Rajskub, “because it’s either that or the animal is going to be killed by predators. So they have to be in charge.”