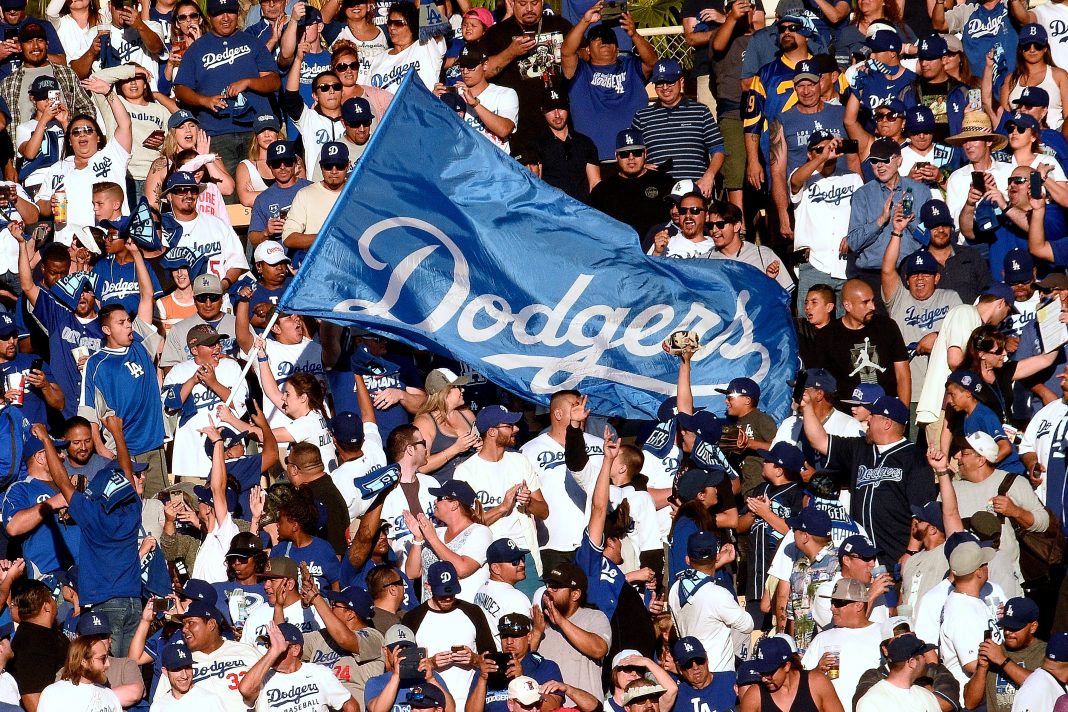 There’s a saying in baseball: “If you build it, they will come.” When Bren Gomez and Diamond Doom couldn’t find a media outlet covering the Dodgers in a way they related to, they decided to build their own–and hoped that other fans would come.

With the Second Base podcast, they’ve created a platform to talk about the team in a way that might feel fresh and appealing to a lot of people, particularly those who ever have been put off by sports coverage that focuses on recitation of jargon and stats.

On the show they talk about the team’s performance on the field but also find time to discuss player beards, Dodger blue nail art, stadium snacks, walk-up songs, and the romance and nostalgia of baseball that goes beyond the numbers. In particular, they welcome other women, who make up half of the Dodgers’ fan population but go largely unrepresented in official coverage of the team.

The show, which debuted at the start of this baseball season, releases new episodes weekly, available on Stitcher, Spotify, and iTunes. We spoke with the creators about what motivated them to strike out on their own.

Why launch your podcast about the Dodgers?

Gomez: The seed was definitely planted when I was looking for coverage of Game 3 of the 2018 World Series. I was tired of hearing everything from such a statistical, black-and-white perspective—a very “bro” perspective.

Most of the hardcore Dodgers fans I know are women. Half of MLB’s fan base is women, and we want to speak to them without judgment or condescension. We don’t want to feel like we have to defend our reasons for following the game, and we don’t want to make anyone else feel like that. We just want to insert a different, fun, lighthearted perspective in a sport that can sometimes take itself way too seriously—especially because baseball is male-dominated and rife with misogyny.

You mention encountering people who find your fandom less “valid” for various reasons and being tired of defending yourself. How does that inform what you’re doing on the podcast?

Doom: People are fans for a variety of reasons: They played as a kid, or they just moved to town and it helps them establish a sense of home, or their spouse is a fan, and over time they fell in love with the team. These are all valid. To keep up with baseball is a huge investment for fans. A busy parent trying to juggle work, family, school functions, and their fandom isn’t less of a fan because they don’t know about the latest trade.

We just speak to a different kind of fan. We don’t know how many people we’ll be speaking to, maybe it’s just going to be our parents. For the record, I actually really like the dynamic between [Dodgers broadcasters Orel] Hershiser and [Joe] Davis, but they aren’t talking about dogs or that time the Dodgers did Star Trek night, and that’s what I want to talk about.

When you look at sports media, do you find voices that you can identify with or speak to how you enjoy the team?

Gomez: Most of the voices in sports media, baseball particularly, all sort of blend together. We talked about this a bit in our first episode. I was really looking for something a bit more unique, playful, female-friendly, and dare I say it, millennial, and we couldn’t find it. So we’re hoping we created it. So far we’ve had a really great response.

Besides Alanna Rizzo, who covers the Dodgers for SportsNetLA, Dodgers coverage, even independent coverage like podcasts, is pretty male-dominated—and that just doesn’t make sense for this city or their fan base. Don’t get me wrong, I love Hersh and Davis, and my complaints aren’t directed toward them specifically, I’m talking about baseball as a whole.

We also wanted to talk more about Dodgers-themed nail art, fashion, what people are wearing and doing at the games during downtime, and the players as people, their beards, their dogs, what L.A means to them… because that’s all part of loving the team, too.

What are you hoping to see from the team this season?

Doom: Big stories I expect to see? Free agency, injuries, people claiming players are washed-up because they have a bad week. Big stories that I want to see? More players in those palm-tree socks, a Samantha Brown-style Dodgers travel show based on away dates and hosted by players, and an end to needless gatekeeping.

Gomez: Obviously I would love to see us get to the World Series again and take a win. Beyond that, there’s a really good dynamic with this team right now and I’m excited to watch it play out on the field. Big players to watch: Kiké Hernández, Corey Seager, and Cody Bellinger. I call them my holy trinity.

Hernández was just moved from a utility player to second baseman, so it will be interesting to see how he performs in one position. Seager is back after spending the entirety of last season on the injured list. I’m excited to see how he channels all his frustration from last season into performance this season. And Bellinger, honestly, I think that kid is history in the making, and we so rarely get to realize we’re watching history being made as it happens, but he’s definitely doing it. He’s still really young and definitely still learning, but he’s already on track to have a bonkers year. His beard has its own hashtag, #Bellibeard, which I wish I could take credit for.

Why the Dodgers? What draws you to this team in particular?

Doom: I grew up in St. Louis and have a lot of romanticism about baseball, so when I moved to Los Angeles, I started following the Dodgers and attending games. I still love the Cardinals, but for almost ten years I’d say the teams hold equal but different places in my heart. Maybe I’m actually Doctor Who and have two hearts, and that’s how I do it. I stick with them because I’m a fan, it’s what fans do. I want them to win, I want them to take it all, but they could come in last and I wouldn’t love them any less.

Gomez: The Dodgers are obviously iconic to Los Angeles, and I was born and raised in L.A., just a few miles from Dodger Stadium, so I was born into the blue. I can’t remember a time in my life when Dodgers paraphernalia wasn’t present in my household growing up–including my dad’s collection of bobbleheads, which I’m not allowed to touch to this day. One of my earliest memories is hearing all the hype about Mike Piazza back in the early ‘90s; his name was as familiar to me as my brother’s. I was so young when I first started attending games that I don’t even remember my first one, going to games was something my family just always did–back when there were $6 seats.

They’re also just such fun and interesting team to follow, especially in the last five to eight years, as we’ve been acquiring players that really show a pride and love for Los Angeles. And I love the way they celebrate and cater to Latinx culture. It shows they know their fan base and that’s also really important to me.

One of my favorite things to joke about is that they’re all my boyfriends and I’m just waiting for them to put a ring on it. Sure, we lost a couple of playoff series recently, and we collectively as a city experienced that grief over it, especially since it happened on home turf. But one day, we’re gonna win, and I can’t wait to be part of that experience as well.