Home News Being the Voice of the Dodgers in 2020 Has Been No Walk... 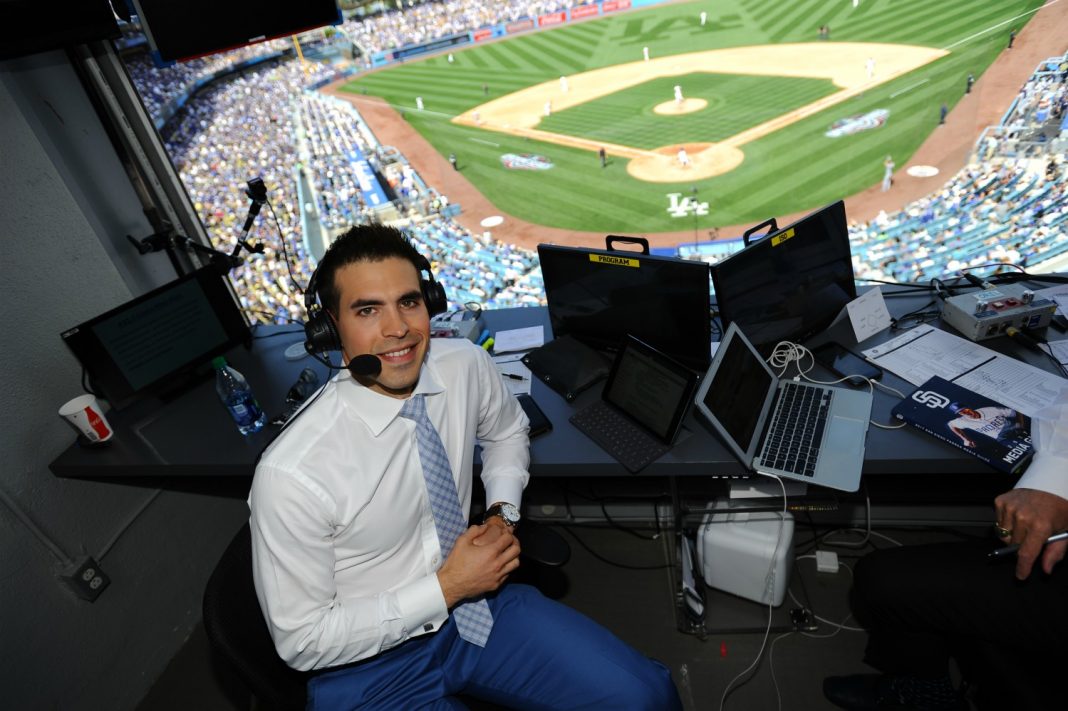 For Joe Davis, being hired as the Dodgers’ new secondary play-by-play voice in 2015 was a big deal—but the timing is what made it particularly momentous. At just 27 years old, he was suddenly first in line to be the eventual replacement for Vin Scully, a nearly unanimous pick for greatest announcer of all time.

“I didn’t really belong,” Davis admitted to color analyst and former pitcher Orel Hershiser during a recent episode of their podcast Off Air with Joe and Orel. “I’d done two major league baseball games at that point, and I did a full season for Fox in 2015 as we were doing the negotiations, but really I didn’t belong in that seat. I didn’t belong in the seat to follow Vin.”

Sitting at home in 2020, reflecting (via Zoom) on how he got here, Davis is far more comfortable than he was the day he got the call. It’s another sunny day in South Pasadena, where he lives with his wife, Libby, and their two young children, and a rare off day for the broadcaster who staggers his time with the Dodgers to also call college football, college basketball, NFL football, and national MLB games for Fox. “It feels like home to us,” he says of his family’s adopted neighborhood. “It feels like the Midwest.”

Davis was initially from Charlotte (pronounced Char-lot), a small town in Michigan, before his family moved to an even smaller town nearby, Potterville, where his family still lives. (The town in It’s a Wonderful Life is renamed “Pottersville,” with an “s,” for those trying to figure out why that sounds familiar.) His father was the high school football coach, and he was the star quarterback. “The kind of town where everybody knows everybody,” Davis says. “I had 70 kids in my graduating class.”

After getting some broadcasting experience at Beloit College in Wisconsin, Davis landed a job calling games for the Biscuits, a Double-A baseball team in Montgomery, Alabama. Soon ESPN heard his voice—a booming, precise voice that sounds like a more exuberant version of Joe Buck—and started working him into their roster. Eventually he found his way to Fox, and then to Dodger executive Lon Rosen’s office. Vin’s heir had arrived.

“My prayer for him, for anyone, is maybe the hardest thing—be yourself,” Scully told The L.A. Times in 2017, just before Davis was set to call his first full season for the Dodgers—the first season in 67 years the team was without Scully. “For the 100 years he might be there, the big thing is to be yourself.”

Alanna Rizzo, the Dodgers in-game reporter, thinks Davis has spent the last four seasons doing just that: “I think the biggest compliment I could give to Joe is that he never tried to be Vin,” she says over the phone. “He did his own method, his own style, he had his own thumbprint on things. And he respects the position and who came before him, but he isn’t trying to be anybody who he isn’t.”

In the booth, some of the initial pressure of replacing Vin was alleviated by Hershiser, whom Davis has developed a close friendship with outside of the job. They have a playful rapport calling games together, which has less of a father-son feel than you might think given the age gap.

“I think he is a very young 62 and I’m a pretty boring version of 32, so we meet in the middle,” Davis jokes. Hershiser is “Uncle Orel” to Davis’s children, and he and his wife, Dana, babysit them on Saturday mornings so Joe and Libby can have some time off from parenting. At the end of every episode of Off Air, Davis and Hershiser say something along the lines of “Love ya, buddy.” (The Bulldog took a few episodes before he started saying it back.)

“We’ve become family,” Hershiser says on the phone, with Dana in the background occasionally helping him recall various details. “He’s definitely never leaving Southern California, I can tell. They’re not going back to winter.”

Not that there was much of a choice this year. With travel restricted during the pandemic-shortened MLB season, broadcast crews have had to resort to calling away games from home—in some cases literally; Dodgers radio broadcaster Charley Steiner has been calling games from his living room. The circumstances have presented Davis with a fresh set of challenges just as he was starting to settle into the job.

“It’s just not the same without fans in there,” he laments, citing the missing energy first and foremost, as well as smaller details, like the difficulty of judging the ball off the bat when you don’t have a crowd reaction as a guide. Also, the whole thing is just plain weird: “It’s odd to walk into Dodger Stadium and there’s ten or 15 of us,” says Hershiser.

But for a while it seemed like this season wasn’t even going to make it this far, especially after COVID-19 outbreaks hit the Marlins and Cardinals clubhouses in early summer. The Dodgers were lucky to only miss one scheduled 2020 game, which occurred when new star Mookie Betts led a team-wide protest in light of the civil unrest in the country. (“Seeing…those platforms now being used, with so many eyes on [them], it’s a really cool thing,” says Davis.)

Whether or not it was a good idea to play at all this year, the Dodgers are heading into the postseason with the best record in baseball—and the most to prove: This is the first season since it was revealed that the Astros cheated in 2017, the year they beat the Dodgers in the World Series. Rizzo calls that title “tainted.” Hershiser has called it “stolen,” and was nearly in tears on Off Air when talking about how it had affected players like Clayton Kershaw and Justin Turner, veterans who can never get back what was taken from them.

For his part, though, Davis will have to remain steadfastly neutral in the postseason, as he’ll be calling games on Fox for a national audience. His last moment to really let loose for the Dodgers in 2020 already came and went—when they won the division for the eighth straight time.

“Even in a year where not much in the world seems normal, a dose of the familiar,” Davis said on the air, relishing the moment. “The best in the West, unchanged.”

RELATED: L.A. City Council Wants Justice for the Dodgers—but They’re Out of Their League