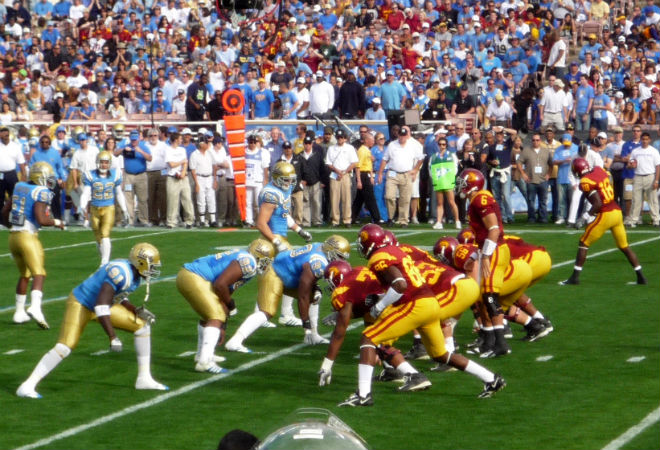 As Americans, college football is in our blood—and our economy. The lucrative—and often mercenary—side of college athletics is explored in Schooled: The Price of College Sports, which debuts tonight at 8 p.m. on EPIX.

Produced by historian Taylor Branch (who wrote the book The Cartel that was the basis for the doc), former NCAA and NFL football player Domonique Foxworth, and filmmaker Andrew Muscato, Schooled dives into the complex machine that is college sports and attempts to shed light on the inner workings of some of the nation’s most prestigious programs. Narrated by actor Sam Rockwell, the documentary weaves together interviews and behind-the-scenes footage to tell the story of how the NCAA went from a small-time organization to a breeding ground for professional athletes.

Division I football and basketball programs are revenue-drivers for many universities. They generate billions of dollars, making stars of coaches and a few standout players while funding lavish arenas and training facilities. But as Schooled is quick to point out, there’s one group of people who don’t financially benefit from the moneymaking monster: the players.

Dubbed student-athletes by the NCAA, college players must abide by a code of amateurism that, according to the NCAA website, forbids all sorts of things including: “contracts with professional teams; salary for participating in athletics; prize money above actual and necessary expenses; play with professionals; tryouts, practice or competition with a professional team; benefits from an agent or prospective agent; agreement to be represented by an agent; delayed initial full-time collegiate enrollment to participate in organized sports competition.” In short: employment. A student body president might earn $4,000 to $5,000 a year, but not an NCAA athlete.

Schooled starts to explore the strange double-standard many student-athletes live under by detailing their daily grind:

They may receive a free or reduced cost education (although even that isn’t guaranteed if they get injured or don’t perform well), but there’s no monetary reward for making it through this rigorous system. As Foxworth points out in the movie, nabbing an interception in a game is much more important than earning an ‘A’ on an exam. Amateur status only seems to count when it comes to being a student.

The frustration many college athletes feel with the NCAA is exemplified in a scene where former UCLA running back Jonathan Franklin shows how players’ likenesses are used in video games without their permission—and without reward. “They never asked us, they just put us in here,” says Franklin of the videogame NCAA FOOTBALL ’12.

Another former UCLA athlete, basketball player Ed O’Bannon, is taking this problem upstairs. O’Bannon is the lead plaintiff in O’Bannon v. NCAA, an class action lawsuit that challenges the NCAA’s use of players’ likenesses for commercial purposes. O’Bannon complains that his likeness from the Bruins 1995 NCAA championship team was used without his knowledge or permission in a basketball videogame.

UCLA is featured heavily in Schooled with players like Franklin and Jeff Locke sharing their personal experiences. Franklin explains that he received a scholarship of $28,000 per year although it cost him approximately $30,000 a year to attend UCLA. By comparison, UCLA basketball and football pulled in $71 million in 2012.

So where does all that money go?

Schooled asserts that the money pays for other sports programs—as well as their administrators, most of whom get paid handsomely. Bruins head football coach Jim Mora makes an estimated $1.9 million per year. That’s typical for major college teams at universities like USC, Alabama, Duke, etc.

“The spectacle of college sports is something we passionately cherish and celebrate in this country,” Muscato said in a statement. “However, that fervor has overwhelmingly masked certain issues that we conveniently have chosen to ignore.”

The film’s directors, Ross Finkel, Trevor Martin, and Jonathan Paley, stitched the film together in a way that tries to give both sides a chance to argue their points, but the NCAA and its president, Mark Emmert, are mostly absent save for archival interview clips and press conferences. However, school administrators such as Harvey Perlman (University of Nebraska-Lincoln) and former NCAA vice president and chief policy advisor Wallace Renfro weigh in with counterarguments. Perlman uses the “education is priceless” motto as ammunition. For some that may be true; for others, they costs end up being quite steep.