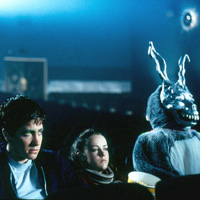 From Asian feasts and British wakes to bookstore birthdays and freaky folk rockers, here are 11 ways to kick off August.

REMEMBER: Mick Farren Memorial Wake
At 3 p.m. on Saturday afternoon, head to Hollywood’s vaguely British-themed pub, The Cat & Fiddle, for a wake honoring musician and writer Mick Farren, who died last week while performing in London with his band the Deviants. The British-born Farren wrote for a number of publications including CityBeat. More information. (August 3; The Cat & Fiddle)

HEAR: Bob Dylan, Wilco, My Morning Jacket, Ryan Bingham
71-year-old Dylan shows no signs of slowing as he embarks on a tour with a younger set of rockers. Jeff Tweedy of Wilco and Jim James of My Morning Jacket must be over the moon to perform with him at the aptly named Americanarama Festival. More information. (August 3; Verizon Wireless Amphitheatre, Irvine)

SEE: Eat See Hear: Donnie Darko
Released just weeks after 9/11, Richard Kelley’s movie about a troubled kid plagued by visions of a time-traveling bunny was a sleeper hit. With its fixie bikes, hoodies, and suburban ennui, the flick may be the patient zero of early-21st-century hipsterism. Judge for yourself at this outdoor screening. More information. (August 3; Santa Monica High School)

HEAR: Diana Ross
She’s the Mistress of Motown. The former Supremes songstress unleashes the sultry, powerful voice that has inspired crowds to get down for more than four decades. More information. (August 3; Hollywood Bowl)

HEAR: Tony Bennett
What’s not to love about seeing the classic crooner sing the great American songbook under the stars at the Hollywood Bowl the day before his 87th birthday? More information. (August 2; Hollywood Bowl)