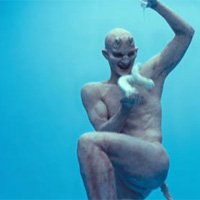 Gabe Bartalos is Matthew Barney’s special effects guru. A new exhibition at Cal State Long Beach’s art museum features his grotesque and evocative sets, masks, and sculptures. Before his partnership with Barney, Bartalos specialized in gore and makeup for horror films including cult hits Brain Damage, The Leprechaun, From Beyond (a total mind-bender by the creator of Re-Animator),and, what may be the best title for a movie ever, Frankenhooker. But it was his work with the polarizing Barney that springboarded Bartalos into the fine art realm.

Barney’s films, most notably his Cremaster Cycle series, appropriate the sleek look and production design of major motion pictures while stringing together visually poetic and sometimes macabre scenes in a seemingly non-linear form. A cheetah lady, a donkey-eared guy, and sheep-eating giants are some of the characters that inhabit Barney’s universe. Bartalos’ imaginative prosthetics are so well fabricated that even these bizarre creatures seem almost real.

Unfortunately, these type of artists have historically received less respect than someone who carves statues from marble or splatters paint on a canvas. Recently there has been a paradigm shift as sculptors who create hyperrealistic works crafted from silicon–like Milwaukee-based artist Mark Sijan, and Ron Mueck (a creature creator for Jim Henson)– have earned gallery and museum space next to works of steel, plaster, and travertine. Bartolos’ exhibition is an extension of this recent trend.

When excised from Barney’s work, Bartalos’ pieces become sculptural works in themselves. Alone, they exist as realistic pieces from a surrealist world, as if Hieronymus Bosch’s heaven & hell triptych has come to life.