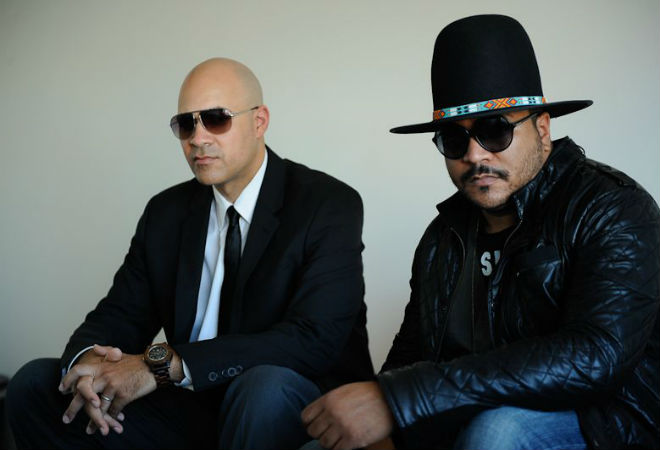 Marcus Guillory is a man of many talents: a musician, composer, and the author of Red Now and Laters, a novel that comes out in March. In 2008, Guillory was working as a producer on the E! reality show Snoop Dogg’s Father Hood when he met deejay Garth Trinidad, whose smooth voice is well known to KCRW listeners. “Marcus was helping me with a television project I was developing,” Trinidad says. “I found out he was a trained musician in the process of learning how to produce electronic music.”

When Trinidad heard the music Guillory had produced under the name Mateo Senolia, he loved it so much that his first impulse was to introduce his radio listeners to it. “Marcus is a master percussionist and multi-instrumentalist who trained with Bill Summers in New Orleans,” Trinidad says. “I actually wanted to set Marcus’s writing to music for a radio drama I was developing, but when we started experimenting with writing music together we decided we wanted to get it out there on its own merit.” The result? A successful six-month residency at R Bar in Koreatown and the EP Postcards From Strangers, out on house music guru Osunlade’s Yoruba Records. Here are six things you should know about the dynamic duo of Trinidad-Senolia.

❶ What is “lit-house”? A genre where house music provides an audio backdrop for someone to read prose over the beats. “The music writing and the lyrics writing is totally separate,” says Guillory. “The music and the prose have to live side by side. It’s not a mash-up.”

❷ The storytelling aspect of the duo’s music is inspired by the tradition of combining jazz performances with poetry readings and the free-flow, keep-writing-till-there’s-no-more-ink aesthetic of Beat authors such as Jack Kerouac.

“You used to hear house music accompanied by spoken word poetry a lot,” Guillory explains. “It made me think to myself, ‘Why not tell a story?’”

❸ Trinidad-Senolia was set to debut its music at R Bar in Koreatown for one night in December 2012. The show was such a success that they were invited to do a six month residency.

❹ On Postcards From Strangers, Trinidad-Senolia uses passages from Guillory’s writings. On the track “La Pacifica,” which Guillory describes as a three-part metaphor in which Los Angeles, the Pacific Ocean, and a personal love story are conflated.

❺ “We rarely perform the recorded music. We like to change it up at shows,” Guillory says. This means that Trinidad, who usually performs the readings, varies the material based not just on what he feels suits the music but also the venue. “Timing means everything when you’re reading over the music,” Trinidad says. “You have to be able to gauge the crowd and be aware of the level of energy.”

❻ “So far, the L.A. crowd has responded really well to it,” Guillory says. “People on the dance floor are really engaged by it. It’s danceable music but it has substance. At the end of the day, I’m all for turning listeners into readers.”