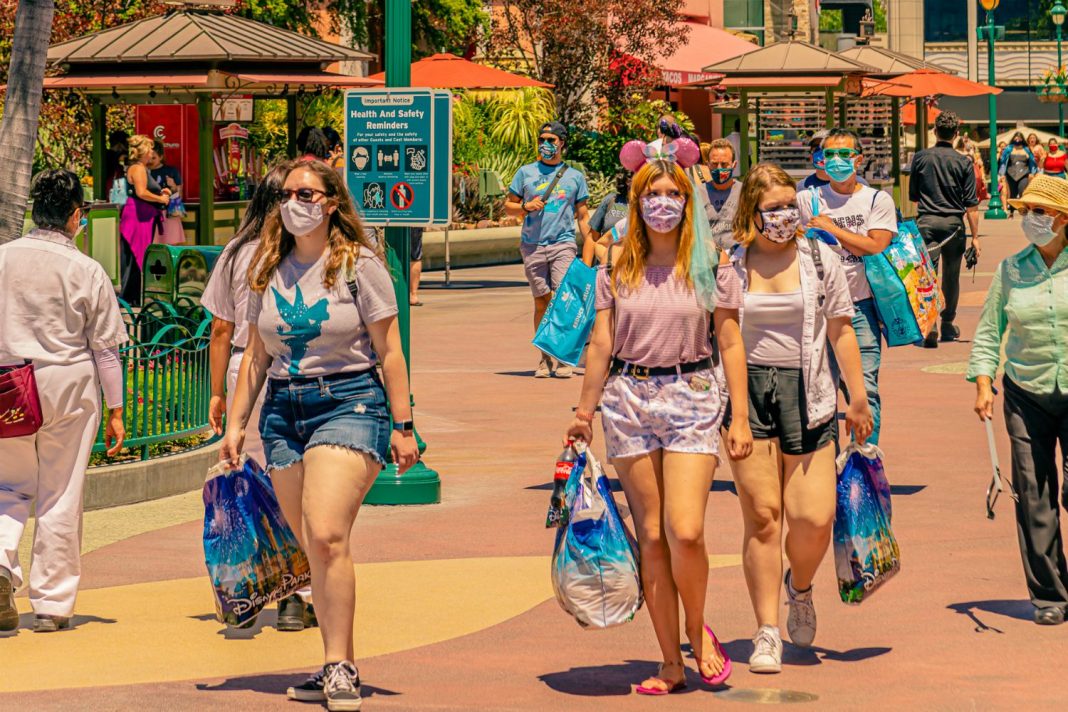 and enter the world of

These words, placed there 65 years before, adorn a plaque above the tunnel entrance to Main Street as you enter Disneyland. Visitors to the newly reopened Downtown Disney can just make them out behind a locked gate that itself is ten to 20 feet back behind a white rope that blocks off looky-loos getting all the way up to the front entrance. For those of us visiting Downtown Disneyland on opening day, this quote was a heartbreaking reminder that for right now we’re all stuck here in today.

The outdoor dining and shopping area’s relaunch on Thursday, July 9, was supposed to be a soft opening heralding the return of both the original Disneyland and California Adventure, right up until mounting cases of COVID-19 forced the state to keep theme parks, and many other large venue spaces, closed for the foreseeable future. With the ICUs at capacity, there’s no room in the land of today for a talking mouse and his many, many friends. The cats of Disneyland have happily taken over the grounds of the Disneyland Hotel and can be seen sitting, playing, and sunbathing from the sidewalk near the side entrances to the building.

Even as the fear of more closures ramps up, opening day felt overly full. Some people camped overnight, but I was more lackadaisical and got in with no problem at around 2 p.m. At multiple checkpoints temperatures are taken, purses are inspected, and there’s even a K-9 unit to walk through before anyone can enter Downtown Disney proper. While most people wore masks, many people blatantly removed their masks. At restaurants, servers were forced to approach and serve tables of customers who had removed and not replaced their masks while sitting at the outdoor tables. Some of the most popular restaurants including Tortilla Jo’s and Ralph Brennan’s Jazz Kitchen remain closed even to take-out orders. Signs abound, including a small sign on one lamppost telling visitors that if they catch COVID-19 during their visit, they cannot sue Disneyland or the Walt Disney Corporation for any damages. Hand sanitizer was placed liberally through out the district and there was even a single hand washing station out for people who wanted to scrub up without venturing to a restroom.

Lines wound outside places like Wetzel’s Pretzels, where people waited as long as 45 minutes for their snack. The temperatures were staggeringly warm and the only way to get was to purchase it from one of the overwhelmed vendors scattered throughout the outdoor mall. The longest wait we encountered was for the World Of Disney Store, which was using a timed-entry system (I had to wait about two and a half hours). Once inside, I spoke to several Disney fanatics who said they were worried about getting sick, but that they just couldn’t miss out on the chance of purchasing the limited quantity 65th anniversary merch available for the first time that day in the store. The most popular item by far was the $78 dollar circle skirt which literally sold out while I was standing in the store.

Unfortunately, while people in lines and on the “street” were great about social distancing, the same can’t be said for people inside the store itself. Ironically, the worst place to try to shop was at one of the shelves selling Disney-themed masks (four for $20, with a limit of four per person). I was chased away repeatedly by people crowding around and leaning over me to grab items.

Earlier, while waiting for a text saying I could enter the line for World of Disney, I poked around the front entrances of the two parks. While Disneyland proper was very difficult to get close to, you could poke your nose right through California Adventure’s gates. I was able to see some of the preparations being made to make the parks more safe, such as plexiglass partitions by each ticket-takers machine. I also talked to some folks who’d gathered in the ares. Some people had traveled as far as San Diego for just a glimpse of the Magic Kingdom. A group of college students said they were afraid that they would be sent home before they were able to use their annual passes again. One said he was leaving for Indiana in just a few weeks and was heartbroken that he missed his last chance to go on Splash Mountain before its planned remodel into a Princess and the Frog-themed ride. He said he hopes to be able to come back out in the spring when his college resumes in person classes (he hopes), in order to enjoy the park before his pass expires. One of his companions was supposed to start USC in the fall, but now doesn’t know when she’ll be able to move into her first dorm room.

The guests on opening day were subdued but joyful, grateful to get a glimpse of the Disney magic. With COVID cases skyrocketing, there’s certainly a chance Downtown Disney will have to close again, but, hey, you can always get your merch fix at home.

RELATED: Disneyland Will Now Delay Reopening, With No New Date in Sight