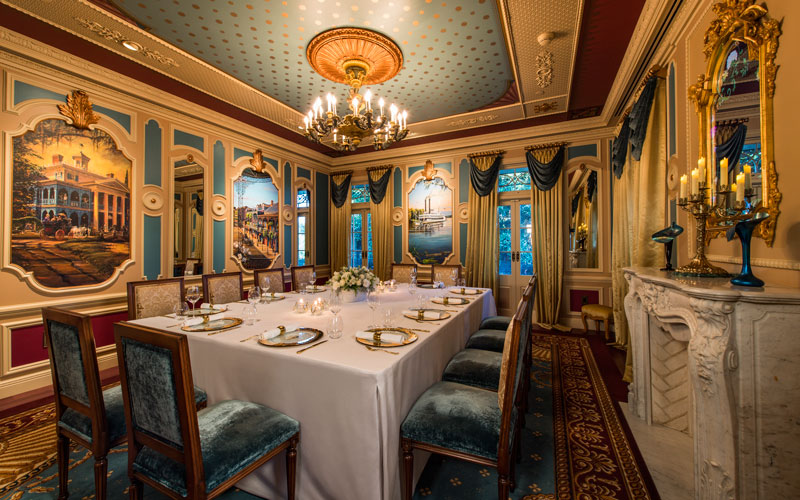 When Walt Disney was still tinkering with his plans for Disneyland, he and his wife Lillian envisioned a private family apartment hidden above the Pirates of the Caribbean ride where they could host prominent guests. Their plans were never fully realized—until now. Walt’s designs for the space have been “faithfully and painstakingly recreated” as a private dining space called 21 Royal. The venue—which formerly housed the Disneyland Dream Suite—has been in the works since 2014, and the secret space just opened to the public—one party of up to 12 per night. Oh, and it costs $15,000.

An evening at 21 Royal begins at the Grand Californian Hotel. From there, guests are escorted into Disneyland, through New Orleans Square and up the stairs to the apartment. The entire space is decorated in the Empire style, which was popular in New Orleans in the 19th century. Disney Legend Dorothea Redmond, a production designer known for her work on Hitchcock films, painted the watercolor renderings for the room in the in ’60s, but her designs have only now been fully realized. The parlor, the first room guests experience, features two murals of the actual castles that inspired Sleeping Beauty’s iconic castle.

Cocktails are served by legit Alfred-status butlers in the salon, and guests are invited hang out in the firefly light-bedecked courtyard and explore the apartment’s various rooms, some of which, as noted on Robb Report, include “magical” elements activated by switches.

After cocktail hour, guests are seated around a linen-covered table for a seven-course meal—served on gold-plated dinnerware, of course—crafted around a theme by two master chefs and a sommelier. Dessert is served on the private balcony, overlooking the Rivers of America (and secretive Star Wars land construction), and you might be able to catch a fireworks show.

To see Walt’s dream for the space come true some 50 years after his death is a thrill—even if it’s only available to the one percent. Of course, that exclusivity is nothing new for the park—if your pockets are as deep as your love of Disneyland, there’s plenty more where this came from. You just have to know where to look.

Thomas Harlander is a staff writer at Los Angeles magazine. You can follow him on Twitter and Instagram. He recently wrote “An Insider’s Guide to the 100 Hidden Gems of L.A.”