Home Uncategorized Disney Pirates Of The Caribbean On Stranger Tides 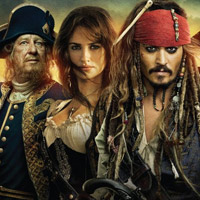 Jack’s back. I saw the latest Pirates Of the Caribbean the other night (it opens tonight at midnight for all you dreadlocked diehards) in all its glorious IMAX 3D–ness at the Rave18 & IMAX Theatre in Culver City. A press release sent to me this week informs me that the mega-movie will rollout tomorrow on a record-breaking 402 IMAX theatres globally. Impressive. $$. IMAX 3D is definitely the way to see this movie as it is one helluva ride. The story, eh, it skips and jumps as many times as Captain Jack escapes the bad guys on the way to locating the fountain of youth. I’ve seen all of the Pirates films (many times) and was looking forward to this one. A wee letdown with the story, but Johnny Depp is still at his boozy, runs like a little girl, best and he got even better as the film rolled expensively along (you can almost smell the money they used to make it—why did I keep looking at his rings?) There is a chuckle-worthy two-second cameo by Judi Dench (she’ll probably win an Oscar again—remember Shakespeare in Love?) and Geoffrey Rush practically steals the show from Depp as Barbossa. Penelope Cruz’s character, Angelica, is a bit confusing and Ian McShane’s Blackbeard starts out scary but fizzles. There are simply one too many chases and instances of Jack saving the day for me, and I actually missed the pirate with the wooden eye and the squat one that looked like Benjamin Franklin (they aren’t in this flick, along with Kiera Knightly and Orlando Bloom). Maybe I’m just getting old. Still, it’s a good romp complete with mermaids and sly missionary position jokes. And it’s worth the price of admission just to hear Depp say the word Hola. Emphasis on the Ho. Perhaps I am quite juvenile after all.