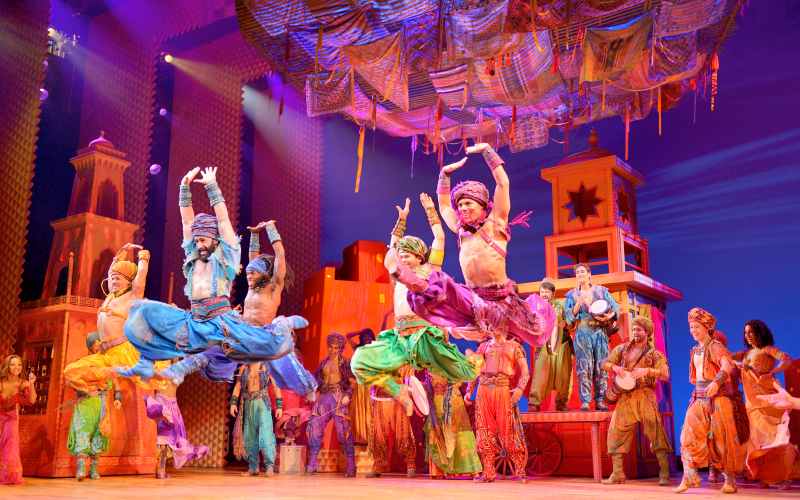 Disney does not do things half-way. And so, when it came to adapting the beloved 1992 animated film Aladdin into a live-action Broadway show, they pulled out all the stops. Alan Menken and Tim Rice, the team who, along with Howard Ashman, were responsible for the music from the film, got back together to work on creating new and expanded songs, and an all-star creative team (with a truckload of Tony Awards amongst them) developed eye-popping sets, jewel-drenched costumes, and some technical innovations never staged in a theater before.

Now, almost four years after the show hit Broadway, they’ve taken it on the road for the first time, making a Los Angeles debut at the Hollywood Pantages Theatre. As you settle in for a sparkly and rainbow-colored show, here are a few details to keep in mind.

All the sets for Aladdin were designed by Bob Crowley who is considered something of a living legend in the theater world. He has won seven Tonys (19 total nominations), including for his work on Once, Mary Poppins, and An American in Paris. Among the details you’ll want to keep your eyes out for if you’re in the audience are a gilded cityscape (which, we’re told, is build from the same flexible, metallic material used to make C-3PO’s costume in the new Star Wars films), some 84 individual special effects pulled off by the tech team, and no less than 38 tons of scenery, lighting, and equipment that’s rigged to fly through the air.

To stand out amid all of that, the company of 35 actors is outfitted in costumes that deserve their own round of applause. Designer Gregg Barnes spent six hours hand painting each rendering before a team of 342 artisans began to bring the costume to life. Fashioning all the trousers, cloaks, jackets, and outrageous headpieces required sourcing fabrics and trims from Morocco, Turkey, Uzbekistan, and 10 other countries around the world. And then there are the rhinestones. On a single costume for a male performer in the finale number, there are 8,644 individual Swarovski crystals; on Jasmine’s wedding gown costume, there are almost 12 pounds of them.

Pulled all together, it’s an impressive display—but, of course, we would expect nothing less.

Disney’s Aladdin runs at the Hollywood Pantages Theater through March 31.

RELATED: Six Los Angeles Poets You Should Be Reading