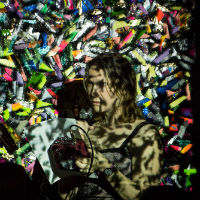 Where do you go for inter-disciplinary performance art accompanied by avant-garde music? From January through March, the Blue Whale, a bar on the third floor of a mall in Little Tokyo, has hosted a once-a-month residency featuring Creative Underground Los Angeles, a collective of artists, musicians, dancers, and actors. Jazz musician Daniel Rosenboom started the collective two years ago as a way to showcase the immense talent in Los Angeles, where experimental artists can struggle for airtime. Creative Underground debuted at the Hammer Museum last year with a multimedia show featuring performances by the Daniel Rosenboom Group and local jazz quartet Slumgum.

We caught up with Creative Underground curators Eron Rauch and Alex Noice to ask about last Sunday’s cross-media show Public Secrets Secret Publics, where a program of digital dance projections and live music explored the blurry lines between public and private life.

How did Creative Underground Los Angeles get started?
AN: Daniel wanted to create a hub for musicians and artists in a very spread-out city. Initially, Creative Underground was meant to be an online source, like a magazine, to showcase new music and art. We would pair off artists each month by randomly drawing names. You’d produce something with whoever you ended up with. It was then posted online. We made videos, music, some writing. It has blossomed into a much more full-force show. Today we use the site primarily for documentation of the events.

ER: Creative Underground was also a chance to take more risks in our art, collaborate with others, and create art where you’re not worried about what a specific gallery wants to see.

How did you become involved?
AN: I’ve known Dan for a long time. I played in his band for a while. When he had this idea, he wanted me to participate and collaborate. The core group consists of people who already knew each other. A lot of new friendships and collaborations have come out of it too. The objective is to be as diverse as possible. We want to include as many different artistic disciplines as possible.

ER: Dan spent quite a while trying to figure out who would be kindred spirits on this project. There’s no top-down structure in the group.

ER: I was so freaked out when I learned that Target knows when you’re having a baby before you do. They send out coupons for baby food and diapers, and they’re actually better than your doctor at predicting this using their algorithms. Similarly there’s the high-speed stock trading done with supercomputers and astrophysicists writing algorithms. It feels way crazier than anything Philip K. Dick ever came up with. These are the issues that the artists of our generation are all picking away at in one way or another, and it’s what we’re trying to explore with this installment.

How does Creative Underground usually work?
AN: For the residency we picked members of the collective to curate them. They would decide on the theme, if any, and who they’d ask to collaborate. You don’t come here with your band that you’ve been playing with for five years. You have to do something specific to the night and the event.

ER: Last summer we were asked to do an event in the courtyard at the Hammer Museum. We had only been together as a collective for maybe six months. That collaboration was amazing, to see dozens of musicians backed by video and vocals and poetry, everything together on stage at the same time. I think that changed the direction of the project. As a group we saw a vision for the potential of these kinds of nights.

How did you find yourselves at Blue Whale?
ER: After the Hammer show, Joon Lee [owner and manager of the Blue Whale] invited us to do a residency there during the winter months. We hadn’t really considered doing monthly concerts. Fortunately this is a space that can also accommodate visual art. If I want to set something up in the courtyard or project visuals onto the wall, Joon says, “Cool, do it. I trust you.”

ER: This is the second of three residency nights at the Blue Whale. We take turns curating the events. People come from different backgrounds. I’m a photographer and mixed media artist. We collaborated with Dorian Wood last month, which was a super intimate event. Everyone has their own take on it.

Is there a template for how to do a show?
AN: The way things come together is very different from one show to the other. We try to have a very definitive theme and be descriptive about the type of environment we want for a given event. With that in mind people can pretty much do whatever they want.

What has the reaction to Creative Underground been?
ER: We see a lot of surprise in people’s faces. At the show at the Hammer, people either looked appalled that we would dare to play a jazz show or they we’re like, “This is the coolest, weirdest thing since Sun Ra!” People were having great conversations, which is amazing to me. We want to provoke a conversation.

What’s next for the collective?
ER: Next month is Laura Bahr’s show, which will be much more theatrical than usual. It’s set in an open courtyard. Actors will read parts from her book. It’s completely new and exciting for us. It’s going to have set design and some of the musicians in the collective will also be collaborating on it. We’re constantly asking ourselves, “What’s new and interesting in L.A.?” There are so many cool things happening here that it would take us 50 years to merge all of it into what we’re doing.