Home Science After They Die, These People’s Bodies Will Become Part of a Museum... 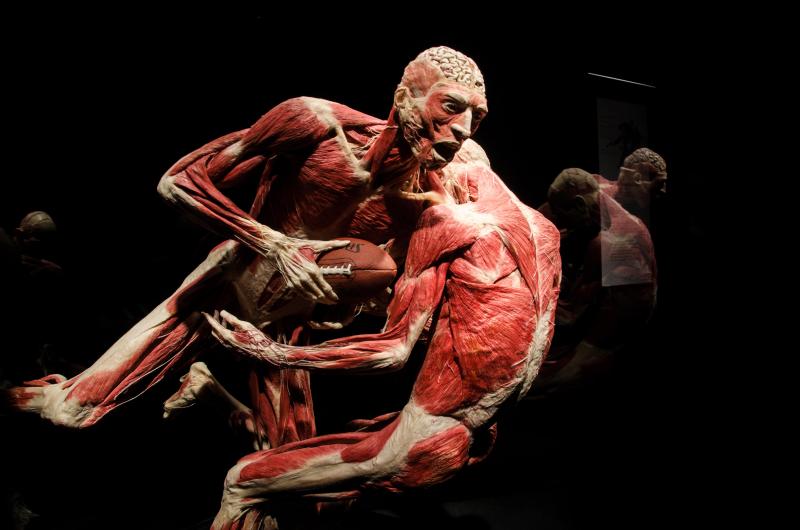 The Body Worlds exhibit, which features real corpses preserved in plastic to showcase their bones, muscles, and organs, might leave some visitors feeling queasy. Not Erlyne Toney-Alvarez and Toney Dixon. When the twin sisters visited the show during its North American debut at the California Science Center in 2004, they were overcome with joy. Enamored by the sight of the bodies up close, they decided they didn’t just want to gawk at them—they wanted to someday have their own bodies on display, too.

“I guess we kind of had a little fascination with what some people might say the macabre,” says Toney-Alvarez, who is 76 and has a shaved head and a nose ring. “We always kind of come off as being a little different, our ideas. The fact that we were twins made us different, first of all. And we’re both a little outspoken.”

When they reached the end of the exhibit, the two sisters from South L.A. noticed a sign with information about Body Worlds’ donor program and decided to fill out a postcard to sign up for it. “We could not fill out that card fast enough,” recalls Dixon, who has short curly blonde hair and wears gold hoops in her ears. “We were just mesmerized. It was something we had never seen. Something we’d never even heard of.”

She and Toney-Alvarez weren’t alone. They are among thousands of people who have agreed to donate their bodies—after death, of course—for display in the international traveling exhibit known as Body Worlds. Masterminded by married German-born physicians Angelina Whalley, who serves as curator, and Gunther von Hagens, who calls himself the “plastinator,” Body Worlds bills itself as the world’s first public display of human plastination. The process, invented by Von Hagens in 1977, involves preserving human bodies with formaldehyde, dissecting and dehydrating them, then sealing them with a heat-set polymer. Von Hagens premiered his plastinated bodies during the debut of Body Worlds in Tokyo in 1995; the exhibit has since traveled to more than 100 cities all over the world, where it’s been viewed by more than 44 million people. Its body donation program, which is now closed to new donors, is also surprisingly popular: more than 13,000 people are on its roster. (Body Worlds has also spawned a host of imitators, including some whose donor programs are reportedly not as not as rigorously vetted, if they exist at all.)

“The donor form is about 20-something pages and you can check all kinds of things,” says Jeffrey Rudolph, the president and CEO of the California Science Center. Rudolph would know: After convincing Von Hagens and Whalley to bring what was then a stand-alone exhibit to the California Science Center in 2004, Rudolph decided to become a donor himself. “I had never seen an exhibit that was as powerful and had as much of an impact on people as this,” he says. “So I sort of thought about it and said, you know, ‘I’ve donated my life to science education doing that here, so what better do I have to do with my body after?’”

Among the options donors are presented with on the paperwork is a list of positions they feel comfortable having their bodies posed in after death, including in the act of sexual intercourse. As for the two bodies shown in such a position in the optional room about procreation toward the end of the exhibit, Rudolph says, “I personally looked at those forms, saw that those people had said yes, saw their death certificate—they died of natural causes. These people were perfectly comfortable being shown that way.”

On a recent rainy afternoon, Rudolph invited Body Worlds’ Los Angeles donors to a luncheon at the California Science Center for a reunion timed to “Pulse,” the exhibit’s third installment at the museum, which runs through February 4. Like Dixon and Toney-Alvarez, many of the donors had signed up while visiting the exhibit in 2004. Some had kept in touch after meeting during an all-expenses-paid trip that year to the Institute for Plastination in Heidelberg, Germany, where Von Hagens led them on a private tour of the place where their bodies would someday be pressed into plastic.

Didn’t that freak them out? Dixon shakes her head no. “Maybe we’re just weird, period, because we were just excited. It didn’t bother us at all, even to the point that we were all making jokes,” she says. She recalled how at one point Von Hagens instructed the group to leave their belongings outside before stepping into a small room and closing the door behind them. “A couple people with us made the joke about, ‘Are you sure we’re coming out [alive]?”

Lynn Kuratomi, 65, a donor based in Hollywood, is similarly unfazed by the inevitability of death. The decision to donate her body to Body Worlds was easy because it meant she wouldn’t have to have a funeral—something she was never interested in anyway. “What’s great is [that most] people don’t have a plan. We have a plan: We know who’s going to embalm us and we know what we have to do,” Kuratomi says. “So that’s like one part of my life I actually have a plan for.”

“It’s almost the only part of my life I have a plan for,” adds David Orozco, 65. Like Kuratomi, he disliked funerals and never wanted to have a burial, “so this was an attractive alternative to the usual death culture.”

For Dixon and Toney-Alvarez, who had initially planned to be cremated, the decision to donate their bodies was largely financially motivated. “We think about it more now as we’ve gotten older and so many of our friends have been passing away,” says Toney-Alvarez. “We just look at each other and shake our heads sometimes at all the expenses that they put out for a funeral, you know? We say, ‘Well, we got it made in the shade.’”

The whole process was incredibly easy, says Orozco, who didn’t tell his wife that he’d signed up for the donor program until the car ride home from the exhibit. That’s when he found out that she had signed up for the program, too.

The only thing left to do now? “You have to die,” he says.

RELATED: You Have One More Chance to Get Tattooed at the Natural History Museum