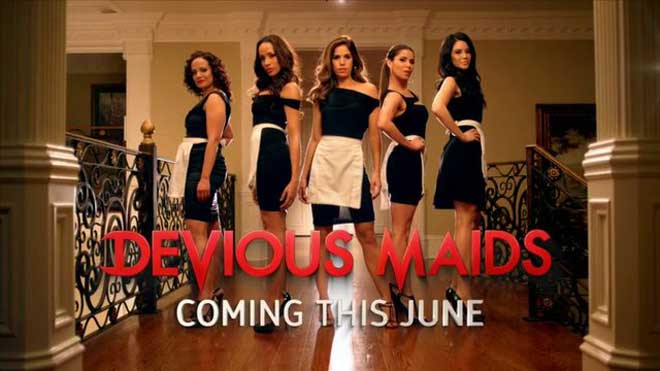 When the billboards for Devious Maids first popped up around L.A. we immediately thought, “Why didn’t anybody think of this sooner?!”

Then we thought, “Maybe it’ll be a cross between Jean Genet and Shonda Rhimes.” Actually, it’s more like Downton Abbey meets Desperate Housewives — which makes sense since Devious Maids was created by Desperate Housewive originator Marc Cherry. (Eva Longoria is one of the executive producers.) He originally developed it for ABC but it was bumped to Lifetime.

Set to debut on Lifetime on June 23, it’s set in Los Angeles and centers on five Latina maids working in Beverly Hills. Based on the Mexican telenovela Ellas son la Alegría del Hogar, it’s full of sex, wealth, privilege, deceit, class warfare, and (hopefully) catfights. Ana Ortiz of Ugly Betty and Judy Reyes of Scrubs are two of the women, and the show also stars soap opera queen Susan Lucci as one of the employers. Careful with those claws, kittycat.