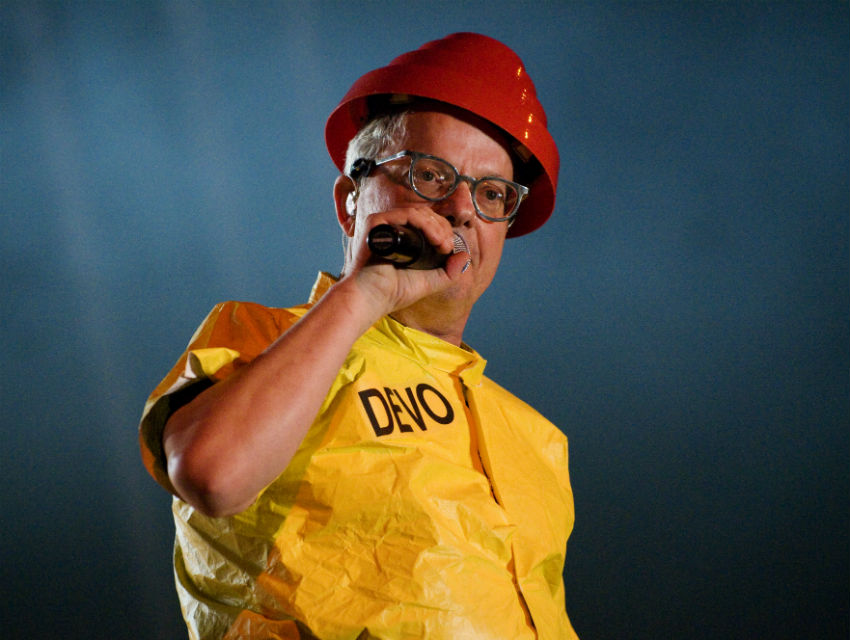 When post-punk godfathers DEVO broke onto the mainstream in 1979 while performing on Saturday Night Live in yellow jumpsuits and their now-iconic “energy domes” (AKA upside-down red flowerpots), Mark Mothersbaugh and his bandmates kicked off 35 years (and counting) of cheerfully merging avant-garde art with pop culture. The result has been a spectator-friendly circus of sound and image. From poststructuralist cultural theory to technology fetishism, DEVO is successful precisely because of its playfulness in defying artistic boundaries. Why shouldn’t a cyborg-robot be a pop star?

But DEVO is only one facet of Mark Mothersbaugh’s artistic output. The 64-year-old singer, composer, visual artist, and designer wears a lot of hats (pun intended), and 2014 has been his year. Most recently, he was the subject of a book that collects everything from DEVO ephemera to Mothersbaugh’s early art experiments.

Myopia
Mark Mothersbaugh: Myopia, written by Adam Lerner,rounds up four decades of career highlights with an emphasis on the interplay between Mothersbaugh’s music and the conceptual art that has guided it. With a foreword by filmmaker and long time collaborator Wes Anderson, Myopia is the most comprehensive survey of Mothersbaugh’s unique punk rock spirit and eclectic multimedia goofs, from painted-on Polaroids to unsettling sketches of showerheads.

The Lego Movie
If every ten-year-old you know has been chanting “everything is awesome” for the last nine months, blame Mothersbaugh and his score for The Lego Movie. The composer, who has also scored movies three Wes Anderson movies (Bottle Rocket, The Royal Tennenbaums, and The Life Aquatic with Steve Zissou) wrote the music for the blockbuster and produced its theme song, “Everything is Awesome,” which satirizes the fascistic tendencies of everyone’s favorite plastic toy.

Eyewear
Early this fall, Mothersbaugh teamed up with designer Shane Baum to conceptualize and release a line of glasses. This isn’t the first time Mothersbaugh has designed cool spectacles (again, pun intended). In the early days of DEVO the spacy glasses worn by all band members were envisioned by Mothersbaugh. Eyeglasses are important to the artist, both aesthetically and practically. As a child he suffered from extreme myopia and astigmatism, which went undiagnosed for years. He has said that when he received his first pair of glasses at age eight, he literally saw the world for the first time.

Wes Anderson Theme Park
What if you could go on a Jacques Cousteau-esque underwater journey with Cate Blanchett or take a psychedelic ‘60s-themed train ride through India accompanied by exquisite designer luggage and a laconic Bill Murray? In his foreword to Myopia, Anderson reveals plans for creating a theme park based on his cinematic universe and designed entirely by Mothersbaugh. It will be located in the musician’s hometown of Akron, Ohio and according to Anderson will include “hundreds of animatronic characters and creatures, rides through vast invented landscapes and buildings, extensive galleries of textiles and sculptures, plus an ongoing original music score piped-in everywhere.” Will Owen Wilson be a tour guide? We’re in!

Devo Made Us Watch Their Own Personal Version of ‘The Office’