Home Uncategorized Despite the Band’s Gory Name Avey Tare’s Slasher Flicks is All About... 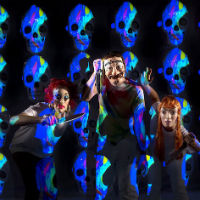 Avey Tare, whose real name is Dave Portner, is one of the founding members of the gleefully experimental band Animal Collective, known for albums like Sung Tongs (2004) and Merriweather Post Pavilion (2009). April 8 marks the release of Enter the Slasher House, the first album from Avey Tare’s Slasher Flicks, the multi-instrumentalist’s newest project. It’s not his first foray outside of the Collective; Tare’s solo album debut Down There came out in 2010. But where that work was intimate and dark, the new band is an eclectic mix of musical influences ranging from space funk to ’60s pop encased in the crackly aesthetic of low-budget horror movies. “Last year I was sick a lot, which gave me time to write the songs,” explains Tare. “I was trying to be positive through music, instead of dwelling on negativity.” Singing and playing guitar, he’s joined by Angel Deradoorian (formerly of Dirty Projectors) on keyboards and vocals and Jeremy Hyman of Baltimore art-rockers Ponytail on drums. Here are five facts to know about Avey Tare before you Enter the Slasher House.

❶ Tare and Deradoorian, who live together, have known each other since 2008 but didn’t start working with Hyman until they moved to Baltimore a couple of years back. “Angel and I lived in Baltimore around 2010-2011, when I was working on the last Animal Collective album, and I saw Jeremy play there,” says Tare, “I was really into his style. He’s the first person I’ve ever approached about playing music that I didn’t have a close friendship with already, so that was daunting.”

❷ Avey Tare’s Slasher Flicks’s puts its low budget horror movie vibe to good use in their video single “Little Fang,” in which a Henson Studios-developed fox puppet explores a psychedelic world of color from behind the wheel of an old VW bug. “Once we started recording it I thought, this record has sort of an old haunted house vibe to it,” Tare explains. “You might not know what’s around every turn.”

❸ That said, don’t expect the music on Enter the Slasher House to be horror-themed. “It’s not a concept album,” Tare says.

❹ The aesthetic of ’70s midnight movies has always been an influence on Tare. “I’m a bigger fan of the supernatural stuff than I am of the gory movies. I think that’s where the eeriness on the album comes from. In high school I started drawing a correlation between psychedelic music and horror films; the outrageousness of both, the mood-swings.”

❺ Enter the Slasher House could also be the title of a Choose Your Own Adventure novel, which perfectly captures the album’s delicate balance between spooky and quirky. “Lately, I feel like music has to be so serious and dramatic. Old ’60s garage rock has this campy, fun side to it. I wanted this band, and playing with Angel and Jeremy, to be a really positive thing.”

All of Your Favorite NYC Bands Live in L.A. Now