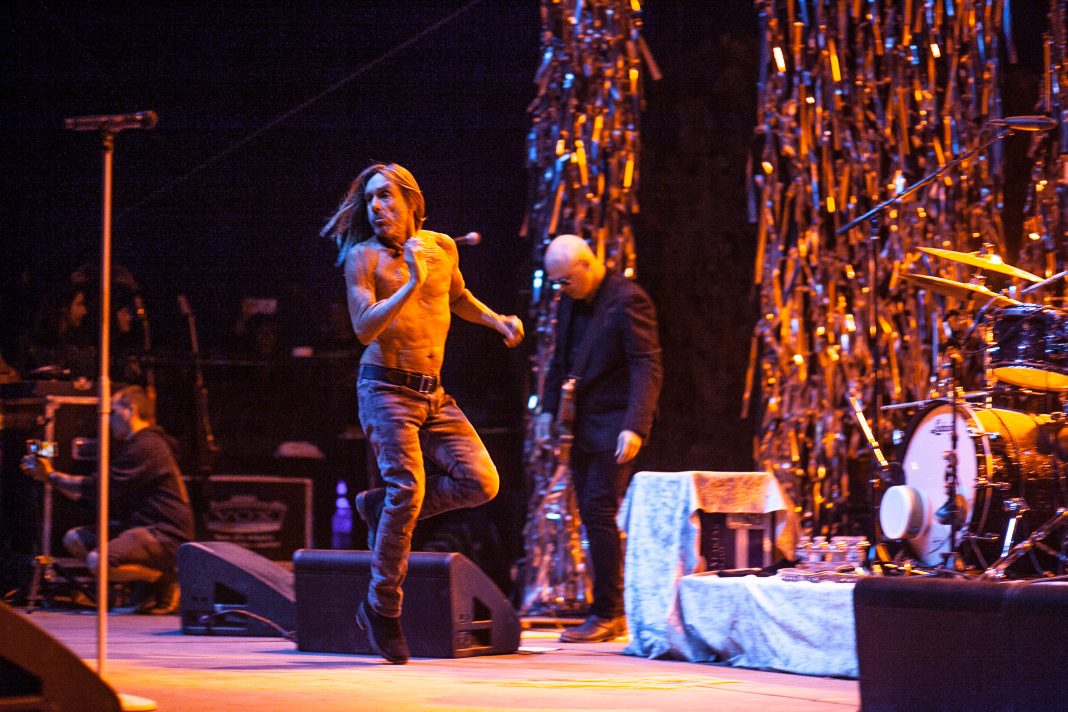 It’s a cliché talking about any music festival to compare it to Coachella. Everything is the “next Coachella,” the “Coachella of free jazz,” or the “Coachella of the Alabama seashore.” By that metric, let’s call Desert Daze the “anti-Coachella,” because the intimate autumn festival with a bill that leans heavily on psych and garage rock acts is a dramatically different experience than Coachella’s mega pop fest.

Most festivals attempt to cast a wide net with an eclectic mix of popular acts from assorted genres–which, in recent years, has often resulted in a “festival season” of lineups that look largely interchangeable. Desert Daze is unapologetically boutique and outside prevailing trends. In a music landscape where guitar-based rock music tends to be represented at festivals with a couple of legacy acts playing small stages, Desert Daze puts it as the fore, along with electronic and experimental artists that all share some element of a psychedelic sensibility.

This year, that means a lineup featuring Tame Impala, King Gizzard and the Lizard Wizard, Death Grips, Warpaint, Ty Segall & White Fence, Kevin Morby, Bedouine, and dozens more. Today, the festival released a much-anticipated final set of acts, adding My Bloody Valentine, Shellac, and Julia Holter. Tame Impala fans also received a special treat: Along with the band’s headlining set, there will be performances by both of Jay Watson’s other projects, Pond and GUM, the first time all three bands have ever appeared on any single bill.

Rather than chasing the trendiest new artist on SoundCloud, Desert Daze goes the other direction, offering nods to some esteemed elder statespeople of the genre. There will be a musical performance and ‘opening ceremony’ by Ian Sevonious, a speaking engagement from Steve Albini in addition to his Shellac set, and Jarvis Cocker of Pulp debuting a new project. Each has demonstrated an impressive ability to continue making interesting, innovative music over the course of decades. 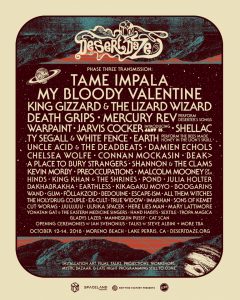 Held in Joshua Tree in previous years, the festival moves to an entirely new venue for 2018, located by Moreno Beach in Lake Perris, California. The waterside spot is currently part of a state environmental restoration project, and the Desert Daze organizers are eager to highlight their sustainability mission for the festival. In addition to supporting the work of the park rangers and staff, and raising visibility of this less-trafficked corner of Riverside County as a nature destination, the lake also offers swimming and boating activities for festival-goers to enjoy between sets, and the surrounding hills will be set up for campers.

Just because it’s not in Joshua Tree, don’t think Desert Daze has lost it’s throwback desert-hippie vibe. The Mystic Bazaar will still offer all the soundbaths and crystal readings you may have come to expect, crafty vendors will peddle their boho wares in strollable market areas, Stories Books & Coffee will host a space for literary readings and iced coffee sipping, there will be workshops, film screenings, and other programming–and, you can reasonably assume, fringed attrire will still be de rigueur.

RELATED: Your Complete Guide to Music Festivals in 2018

Devo Made Us Watch Their Own Personal Version of ‘The Office’