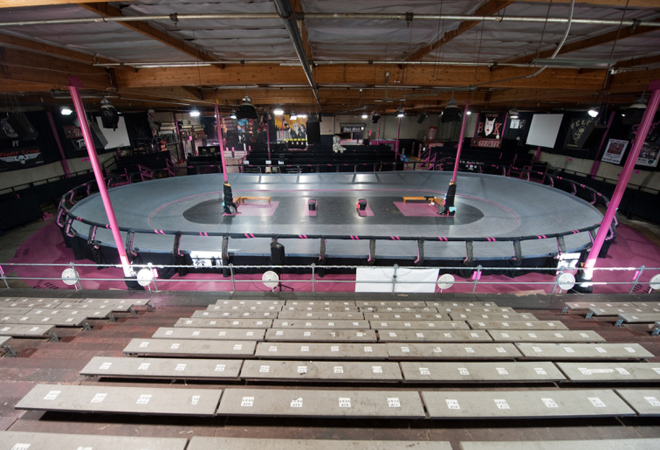 When we say they’re hell on wheels, we mean that as a complement. That’s because the L.A. Derby Dolls are comprised of L.A.’s toughest kneepad-sporting and fishnet-wearing women. Their matches have long been the epicenter of one of L.A.’s favorite athletic events, boasting plenty of blows, babes, and booze.

The Dolls have ten years under their belts in Los Angeles and an endorsement from mayor Eric Garcetti who declared the team “an L.A. institution.” But the ability to see the Derby Dolls compete is in jeopardy and the team wants your help.

After six-and-a-half years spent in rink located on West Temple Street near Union Street, the roller derby Xanadu is being demolished to make way for condos. With the threat of the wrecking ball looming, the team will have to leave their pink palace behind at the end of May.

Spurred by an anonymous donor, the team is asking for donations via Indiegogo. A mysterious donor already offered the team $15,000—if they could get fans to contribute the first $15,000. The fans ponied up but the Derby Dolls still need more money. Their ultimate goal is to raise $100,000 so they can find (and renovate) a new venue. With 28 days left in the campaign (it ends on March 31), they’ve raised $50,418 from more than 400 donors. Rewards range from stickers and T-shirts to advertising space and season tickets. Some of the money would likely go toward facility improvements like better restrooms for spectators, so fans may want to consider donating out of self-interest, if nothing else.

The LA Derby Dolls founder “Demolicious” hopes for a new location where they can construct a stage that provides “the same level of empowerment for women and young girls” as the Doll Factory. A place where they can “learn to be strong in whatever way they need and where they can take on leadership roles.”

During their years at the Doll Factory, the team has been involved with several volunteer projects with the Human Rights Campaign, AIDS Project L.A., and Children’s Hospital Los Angeles, among others. “We’ve always been taken care of and relied on the kindness of others so we like to give back,” says
Demolicious. Perhaps blood, sweat, and tears aren’t the only things they’ll leave behind. After donating time and energy to their community, the Dolls are seeking some help of their own.

How a Cofounder of the Derby Dolls Is Helping the L.A. Fire Department Recruit More Women