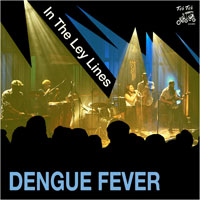 The announcement that “Dengue Fever is making a comeback!” should send any enclosed office space into desk-flipping, code red hysteria. But when we heard the news, we weren’t about to confuse our favorite Cambodian-funk-pop-psych band with a tropical ailment.

This week, Dengue Fever released In the Ley Lines, a ten-track digital compilation of alternate takes and live performances dating back to 2009. Sure, it’s sort of a Dengue Teaser, but the band is priming fans for new material — which they’re currently recording and plan to release on their new label Tuk Tuk Records.

On the studio recording of “Doo Wop (Today I Learnt To Drink),” the local sextet sounds as nimble as ever. If the previously unheard recordings won’t tide you over until the new album, the documentary Girl Rising, which follows girls dealing with injustice, child slavery slavery, and arranged marriages, features new material from the group. Here’s to a healthy year of Fever.