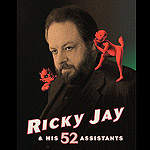 After playing the festival circuit, a new documentary on the gifted prestidigitator, indie actor, and cultural historian Ricky Jay hits L.A. on May 17. Directors Molly Bernstein and Alan Edelstein trace the career of Jay, who apprenticed with his grandfather at age four and went on to work with legendary illusionists Dai Vernon and Charlie Miller. Six decades in, the sleight-of-hand expert has seen audiences change, but one thing has not. “Kids are certainly more sophisticated about the idea of effects that can be done in film,” Jay says. “But that doesn’t make the audience any less excited about being fooled.”