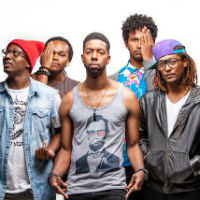 With the holidays approaching, money may be tight for many music fans. After all, there are gifts, airplane tickets, and familial-relations-numbing liters of alcohol to buy. Stretch that entertainment dollar by checking out these bands, playing for free during one of L.A.’s many December residencies.

The Wild Reeds at the Satellite (December 2, 9, 16, 23, 30)
Santa came early for the L.A. quintet; it raised more than $8,000 during a summer IndieGoGo campaign. The band’s second full-length album will be the payoff and it should arrive soon for the hard touring troubadours who have made appearances throughout California, including Echo Park Rising and the Claremont Folk Festival.
Think: The best folk record you stole from your parents
Listen: via Spotify

VUM at the Echo (December 2, 9, 16, 23, 30)
Celebrate the band’s just released full-length album, Psychotropic Jukebox; the vinyl version goes on sale the day after their first night at the Echo. VUM’s minimal, dark noir-pop has earned praise from the Los Angeles Times, LA Weekly, and Henry Rollins.
Think: The soundtrack to David Lynch’s nightmare
Listen: via Spotify

Radiorelics at the Silverlake Lounge (December 2, 9, 16, 23, 30)
Taking a harder-edged approach to ’70s rock, the Compton five-piece put together a cover of Jay Z and Kanye West’s “N***** in Paris” called “Rock So Hard.” It was successful enough to get the band on stage at The Roxy and Supperclub. The group is working on a new album, tentatively titled 2070.
Think: If the early Red Hot Chili Peppers put together an album with Guns N’ Roses
Listen: via Soundcloud

The Peach Kings at Bootleg Bar (December 1, 8, 15, 22)
For those who don’t skip the “Previously on…” preamble to HBO’s Boardwalk Empire, The Peach Kings should already be familiar. The band’s “Thieves & Kings” is the backing track that leads into the nefarious ploats of Steve Buscemi et al. The L.A.-based duo is preparing to release a video for their track, “Be Around.”
Think: If PJ Harvey had grown up in the American south with a blues record collection
Listen: via Soundcloud

Froth at Bootleg Bar (December 2, 9, 16, 23)
The quartet released its recent album, Patterns, on cassette via Fullerton-based label Burger Records. It also toured along the West Coast during the summer, playing shows from San Diego to San Francisco.
Think: If a ’60 surf-rock band took all of the drugs—all of them
Listen: via Bandcamp