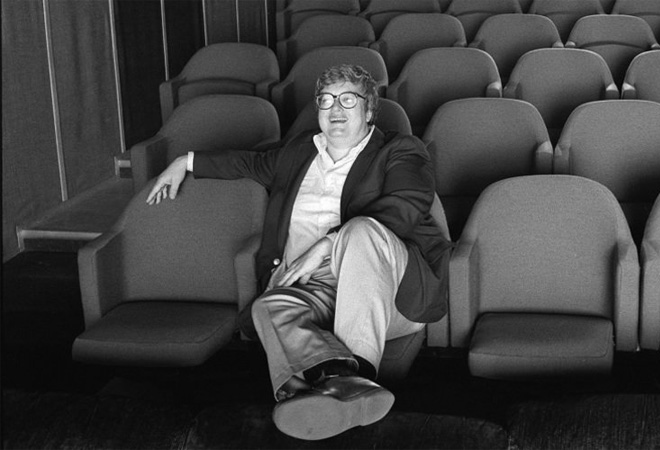 Chaz Ebert isn’t surprised that her husband Roger became the most famous American film critic of the last three decades. “I was with him for 24 years. I knew his passion, not just for film, but for life itself,” she says. “If he were just someone who wrote about film and hadn’t lived, hadn’t studied so many things, hadn’t traveled, hadn’t read, didn’t go to the theater, didn’t know about opera, didn’t know about music, didn’t know about what it takes to make a film technically, then I would have been surprised. But Roger was the real deal.”

Deliberately or not, she invokes that phrase: “life itself.” Life Itself is also the title of Roger Ebert’s 2011 memoir and a new documentary about him. The film is directed by Steve James, one of many filmmakers whose career was impacted by the late film critic. Ebert and his TV co-host Gene Siskel were vocal champions of Hoop Dreams, James’s 1994 documentary about inner-city Chicago teens trying to become basketball players.

“That’s one of the reasons I didn’t put Hoop Dreams in there,” James says. “I felt it would look self-serving. I might have put it in if he hated Hoop Dreams!”

For many (cinema buffs and casual moviegoers alike) Roger Ebert was the face of film criticism. Toward the end of his life, as he lost his jaw to cancer but kept his voice through a vibrant presence on the internet, he became a figure of tremendous inspiration. Ebert died in April 2013, in the middle of filming the documentary, though that did not hamper it’s production.

Life Itself hit theaters and VOD on the 4th of July. We sat down for separate interviews with Steve James and Chaz Ebert, whose face lights up every time she talks about her late husband.

On His Relationship to Ebert
James: “I wasn’t close to Roger. I had known him for years though I didn’t know him that well. I felt a personal connection to him.”

On Jump-Starting Production
James: “The book Life Itself was drawn to my attention when I was approached by Steve Zaillian and his partner. They reached out to Roger’s literary agent, and then they contacted me. I quickly read the book, and said I’d love to do it.”

Ebert: “We were interested when we heard Zaillian, James, and Martin Scorsese (as an executive producer) were attached to it. But it takes so long to negotiate these things. Finally, I woke up one morning with the feeling that if we didn’t get started, this movie would never get made. I call it the universe talking to me. We knew it probably wasn’t the proper protocol, but we just said, ‘Let’s cut through all the BS,’ and in December of 2012, we brought [Steve] James over. He laid out this beautiful plan for the movie he wanted to make, and we said yes to it.”

On the Process of Making the Film
Ebert: “I am so happy this movie exists. It’s a gift to show us not only how to live life, but how to die with dignity and grace and humor. Having said all that, it was a process we were not looking forward to. There’s all this back-and-forth on what days we can and can’t shoot.”

James: “The original idea was to spend around a year with Roger. It seemed like his life was fundamentally about going to screenings, day-to-day life with Chaz, occasional travel to a film festival or to give a speech or accept an award. One thing I was really looking forward to was these dinner parties they would throw from time to time. I wanted to see how he handled it, who was invited and all that. I expected a routine that was vigorous, and I wanted to show how vigorous he was. But of course, that’s not what happened. What happened was that we filmed for less time, but a more significant thing happened: He died.”

Ebert: “Except for two days, Roger was in the hospital the whole time Steve shot this movie. The very first day Steve came to our house with a camera, Roger said, ‘My hip hurts, I don’t know why.’ He’d broken it. The next day, he was in the hospital, and he was there for the next four months. He came home on Valentine’s Day but was only back for two days before we discovered he had caught pneumonia.”

On Chaz’s Input, Creative and Otherwise
Ebert: “We told Steve right off the bat: ‘This is your show. We’re gonna give you access, and you do what you want to do. And we won’t have a hand in shaping it.”

James: “She didn’t see anything until the end, which is what I do with every subject. I really want feedback from the main subjects. I would have shown it to Roger if he’d been with us. I showed it to Chaz and Marlene [Siskel, Gene Siskel’s wife]. Those were the only people I felt a duty to show it to before it was done. And it’s always with the understanding that I’m not obligated to take anything that they suggest or are upset with. But I promised them I’d listen and talk about any issues, and change it if they were convincing and explain why not if they weren’t. [Chaz] had no editorial control, but she was extremely helpful. She had to act as the liaison with the doctors and the hospital.”

Ebert: “In the hospital, you have to get permission before a filmmaker can come in and shoot. You have to make sure that no other people are around, to protect the confidentiality of other patients. You have to schedule around any medicine that he’s getting, so you’re not seeing any private medical procedures. Although, in the film, there are some medical procedures, like the clearing of Roger’s airway. They did that when I was out of town, because I didn’t want Steve to document that. But now, when I look at it, I think it’s important for it to be there, because people didn’t know how difficult it was for Roger to get out of bed every day.”

James: “She was essential with the hospital and with our archival research. And many of the interviewees would not have consented to be in the film without their blessing.”

Ebert: “We wrote to people we knew that he might want to interview and said, ‘You can tell him everything, positive or negative. Any level of candor is okay with us.’”

On the Film’s Artistic Approach
James: “I wanted to elevate the story of his life so that it didn’t feel like a straight biography. I liked the idea of bouncing back and forth between present and the past.”

On Shots he Didn’t Get
James: There’s one part of the book where he says, ‘When I look in the mirror, I see myself at different ages of my life. I don’t see the face that I have now.’ I thought, ‘We’ll see him looking at himself in the mirror and use that as springboard to the past.’ Maybe I could have done that one, but there was never a time where it seemed right to engineer it.

“The other idea was, when he was on his way to a screening, I would set up a camera on the outside of his car, and through his route you’d see the city of Chicago reflected in the windshield over his face. And I’d use that as a transition point to something. I would’ve loved to have gotten that, but the only time he was in a car the entire time I filmed was when he went home. It would have been completely wrong to interrupt that with some arty shot. “

“That’s what happens in docs. You go in with ideas. Some of them you get to do, some of them you don’t. The big difference is that since it ended up being the last months of his life, it became a film not just about how he lived, but how he died.”

On the Final Product
Ebert: “I think it meets or exceeds my ideal of a movie about Roger. And I think Roger would have thought it was a very good movie, too. I’m fine with what was cut because I know it won’t be the only movie made about him. It’s certainly the only one he’ll have participated in. There’s nothing in there about Ebertfest [Ebert’s homegrown film festival for overlooked films]. But I’m making a film about Ebertfest, so it’s alright. Steve couldn’t put in everything.”

James: “Novelists say that, after a certain point, their characters tell them what to do, not the reverse. I used to think that was bullshit, but I understand it now. The film takes on a life of its own. Connections have been made that are strong and you don’t want to break them apart, so you can’t just put something wherever you want. I thought a lot about Roger sitting on my shoulder as I was cutting. He wasn’t saying, ‘Make sure you treat me well.’ It was the opposite: ‘I don’t want no puff piece here. I want this to be a film that I’d be interested in even if it wasn’t about me.’”

“Even looking at this poster… that’s Roger’s uniform. He used to wear his blue shirt, his vest, and his blue blazer, and I loved him with his silver hair and those glasses. That’s one of the classic shots of him. I remember sitting next to him in movies, and he looked just like that. It’s kind of mesmerizing when I look at it.”

“What I think about when I watch the movie is all the different incarnations of him. The sick Roger in his hospital bed, the young Roger at the University of Illinois, all the other Rogers. Some of it is painful, but even through the pain, I love hanging out with him for two hours at the movies.”