It took 232 years for a woman to become vice president of the United States, so it’s no surprise that seeing Kamala Harris step into office has been an emotional moment for so many–from women who have lived their entire lives fighting for equality and justice to girls who are young now and will grow up in a world where women are accepted in the highest reaches of American political leadership. Dear Kamala: Women Write to the New Vice President collects open letters to Harris from a diverse group of those who have been inspired by her inauguration.

Peggy Brooks-Bertram, the author and historian behind the project, previously co-edited a similar book of letters to Michelle Obama. For Dear Kamala, she sought a broad selection of women and girls to share their reactions to seeing a woman take the second-highest office in the country, and also to share their hopes and fears for the nation’s future, more generally.

Los Angeles asked Brooks-Bertram to select two short letters from those included in the book for us to excerpt here, showing the breadth of voices she included the project. The first comes from Dr. Shanna L. Smith, a Jackson State University professor who specializes in African American literature and culture and sees Harris as a baton carrier for a generation of women, particularly Black women. The second is from a girl identified as Eleanor, a California fifth grader and Girl Scout just coming to understand both discrimination and the threat of environmental wreckage, and asking Harris to use her influence to create a safer, more just country for her to grow up in.

There is a continuum among generations of Black women to pass forward a baton . . . of leadership, of care giving, of social justice action. Ours, Generation X, couched between one who dragged 20th-century civil rights into televised existence and another recording 21st-century revolutions to uphold and keep those rights, has a unique positioning. We who are the beneficiaries of social justice movements, who are still often firsts and seconds—as you are the first South Asian and second Black woman to serve as Senator in United States history—are justice conduits. We keep the mantle, then teach, model, and pass on the significance and weight to this new generation: Generation Z(eal). I call them Generation Z(eal) as they fervently and righteously poured into the streets during this pandemic wearing masks in protest to both George Floyd and Breonna Taylor’s murders by law enforcement. 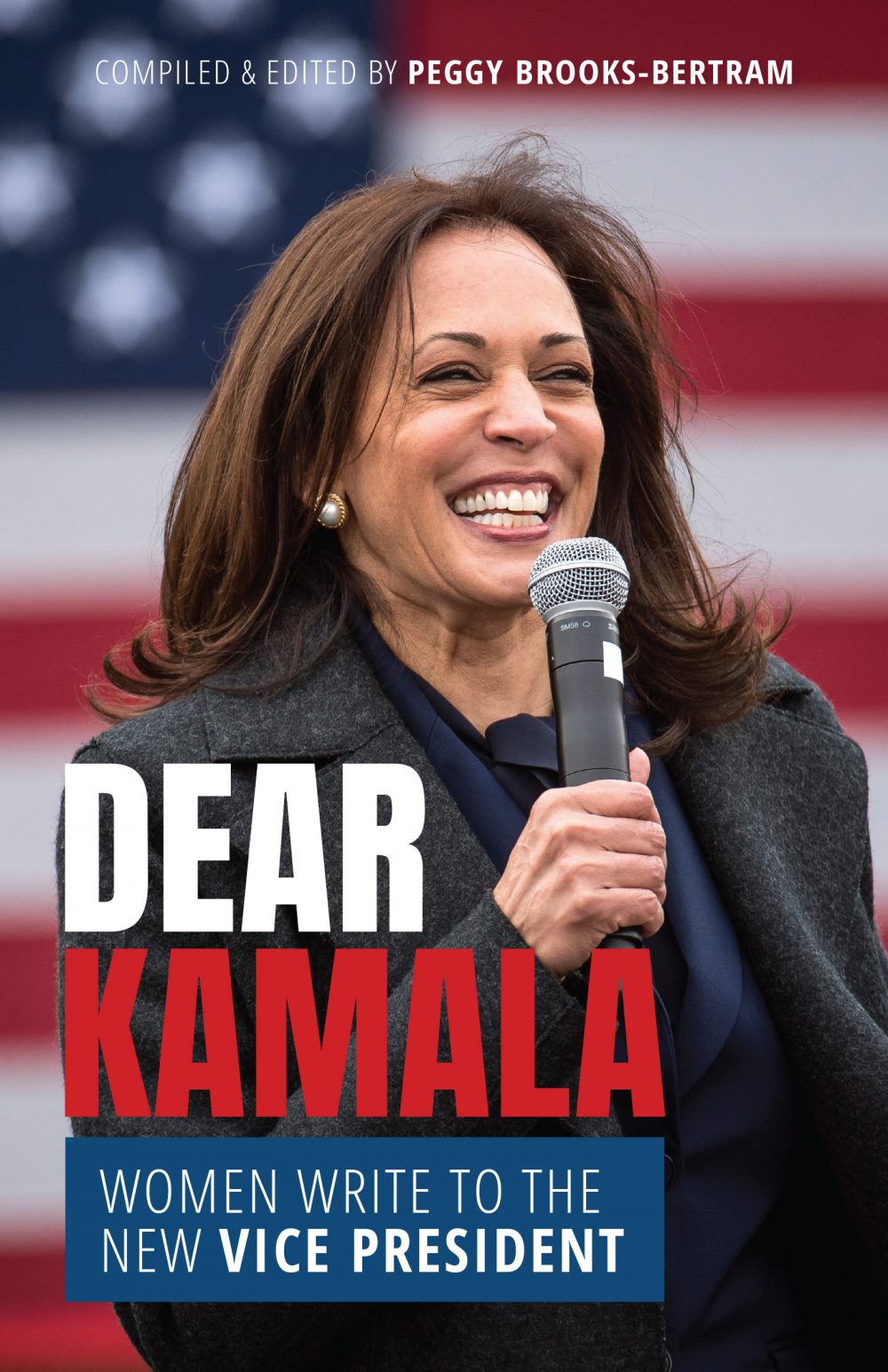 They indignantly (and incorrectly) insisted they “are not their ancestors” and will demand the justice that never seems to come if you are not white, male, and privileged. Yet, it is up to us to show them that they are us—the ones who came before them. They are of us, and, as they move forward to organize and lobby, we must help them recognize the continuum of Pauli Murray, Constance Baker Motley, Diane Nash—and you. Now in the public eye and on a political platform, Generation Z(eal) sees you. Just as you observed Senator Carol Mosely Braun push open doors as the first Black woman elected senator, representing Illinois, young women of Generation Z(eal) watch you. They noticed you entering the presidential race just as you did Shirley Chisolm and Cynthia McKinney before you. What these young women see in you is their own place at the intersection in this country. Simultaneously, they see a Black woman, a South Asian woman, a dream child of immigrants, a sorority sister, a fellow HBCU grad. They see you as a response to questions of identity when asked: What are you? Black? Bi-racial? Othered? American? The answer is simply, yes, to all of these. Identity can exist at intersections that cross, divert, and build bridges. So, when you are seen proudly dancing to drumlines, donning Howard University sweatshirts, wearing Converse or Timberland foot wear, or making masala in the kitchen with Mindy Kaling, you offer cross-sections of individuals to join with you. After all, you are an Alpha woman of the first order of Alpha Kappa Alpha women, the first Black sorority founded in 1908. As District Attorney, later elected Attorney General, then Senator—all in the state of California—you activated our sorority motto “service to all mankind” in ways that challenged and rankled, supported and affirmed those under your watch. Yet, flawed and fully human, you never left the running; instead you embraced it by pursuing the highest office as United States President. When we all see you, we are reminded of Anna Julia Cooper, intellectual, educator, and Black women’s club movement leader, who famously intoned: “Only the BLACK WOMAN can say ‘when and where I enter, in the quiet, undisputed dignity of my womanhood, without violence and without suing or special patronage, then and there the whole Negro race enters with me.’”

Except so many more enter with you, Soror. The survivors of the Marjory Stoneman Douglas High School shooting in 2018 forced a new generation’s conversation on gun control by spearheading “March for Our Lives” in Washington, DC, that year. Emma Gonzalez, now 20, became one of the many faces for that moment, speaking and giving silent salute to the 17 who were slain from the dais. Naomi Wadler, now 14, spoke from the same platform after leading elementary classmates, at the time, on a walk-out in support of kids who had been killed though gun violence. You have already met and touched this girl, an adopted Ethiopian child, who is now a nationally known public speaker on social justice issues. There is Aalayah Eastmond, also a survivor of the Stoneman Douglas shooting, now a college student and criminal justice major, who testified before the Senate and Judiciary Committees on gun control in 2018. These young women are still engaged in grassroots work against gun violence and for voting rights, or for gender identity and equity. Even young women who are not activists in that sense, like Naomi Osaka, are watchful. Joining public protests after the shooting of Jacob Blake and murders of George Floyd and Breonna Taylor, Osaka, aged 22, pointedly wore masks with their names during the US Open. She won the tournament but also won the gaze of the world using these masks. “Before I am an athlete, I am a Black woman,” she famously said, though her ethnicity, similar to yours, is Japanese and Haitian. Like you—and the other young women mentioned—she willed the watching world to pay attention to injustice and take a stand.

The continuum is here. Generation Z(eal) already has the energy and passion for justice work. They are not waiting for our mantle. We share it to give them historical reference and strength for the continued journey. But, they are watchful of you. They look for more than your symbolic representation of “other” and woman in this 2020 presidential election. They look to see how you will support, from among the highest of political offices, all of us who meet at intersections of race, gender, class, religion, ethnicity, ability, and sexual orientation. They listen for you to address them, a jaded audience who have witnessed (on social media) legal and electoral leadership fail them. How much more will you show and tell them as Vice President of the United States? I look forward to what we will teach them—in the classroom and on Capitol Hill.

I am so honored to have the opportunity to write to you! It is extraordinary because you are on the executive branch, and you are the first female vice president! I am personally a little surprised that a woman would be Vice President, since men have continuously been President and Vice President. I really wish that girls had been accepted and taken equally earlier. All the books that I read normally have the women or girls folding laundry, or cooking, but never hunting or fishing or running. And even now, there is still some sexism. I hope that since you are Vice President, you will be able to change that. I also hope that I get to meet you one day!

I wonder, how do you feel about how the country is run right now? What do you do as Vice President? If you could change one thing for our country, please make sure that everyone gets an education, whether they are a girl, a boy, American, Japanese, Mexican, or Indian. I think that everyone has a right to be taught by teachers and learn.

I also think that America needs to work on driving less and stopping the spread of pollution. Maybe we could have a holiday where people try to stop using gasoline? Global warming is getting very dangerous for polar bears and arctic animals because the glaciers are melting. If global warming keeps up, polar bears will be extinct. Also because of all the trash we throw in the ocean, sea creatures’ homes are being destroyed and turtles are being killed because they think that plastic bags are jellyfish.

I am an animal lover and I think that people should try to save all animals. We should take helpless animals from kill shelters and bring them to safe shelters. We should make sure that animals are safe, healthy, and in their right habitat.