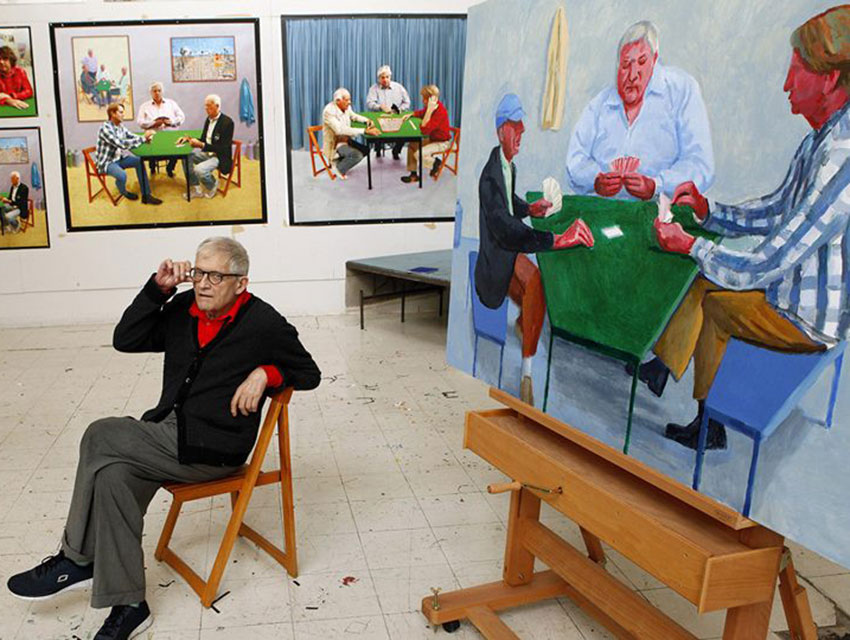 L.A. Louver gave a peek at its upcoming David Hockney show this morning in Venice. The 77-year-old artist sat patiently through a series of brief interviews, fielding questions that spanned from the broad (“What do you think of the new technology?”) to the abortive (“You’re defying the odds!”).

Surrounding the media people who surrounded Hockney were some of his latest works—a mix of acrylic paintings and what Hockney calls “painted drawings,” which are the show’s focal point. Their settings are mostly the same throughout the series: a spare space, sometimes populated with a handful of people, sometimes void of anything but folding wooden chairs, draperies, and Hockney works. Where Hockney’s Polaroid collages from decades ago are expressly two-dimensional, emphasizing connections between images, his latest photo-based works play with foreground and background, creating multiple vanishing points. The effect can be transfixing.

“I think they’re very 3-D really,” said the artist, a white driver’s cap and bright red tie accenting his gray suit. His aim is in part to expand the way we approach digital photography, which has been influenced by the way painting evolved in the West.

“The reason we have perspective with a vanishing point is that it came from optics,” he writes in the L.A. Louver catalog. “I’m sure that’s what Brunelleschi did. He used a five-inch diameter concave mirror to project the Baptistry onto his panel.”

It’s an idea that central to last year’s documentary Tim’s Vermeer, in which tech inventor Tim Jenison demonstrated—for Hockney, among others—his theory that 17th Century Dutch painter Johannes Vermeer used mirrors and lenses as a camera obscura, essentially painting over a live image he’d project onto a surface. In this case, the images are almost entirely photographic, though the artist would, for instance, shoot each chair individually and then paint in shadows to achieve the right effect.

“I’m just pointing out that the Chinese, the Japanese, the Persians, and the Indians get along very, very well without vanishing points. There are no vanishing points in Japanese work, in Chinese [work],” Hockney said shortly before filming some B-roll for a news crew. Within half an hour, the artist reached his own vanishing point, making his exit into an idling Lexus.

The show, “David Hockney: Painting and Photography,” will be on view from July 15 through September 19 at L.A. Louver. For more information, visit www.lalouver.com.