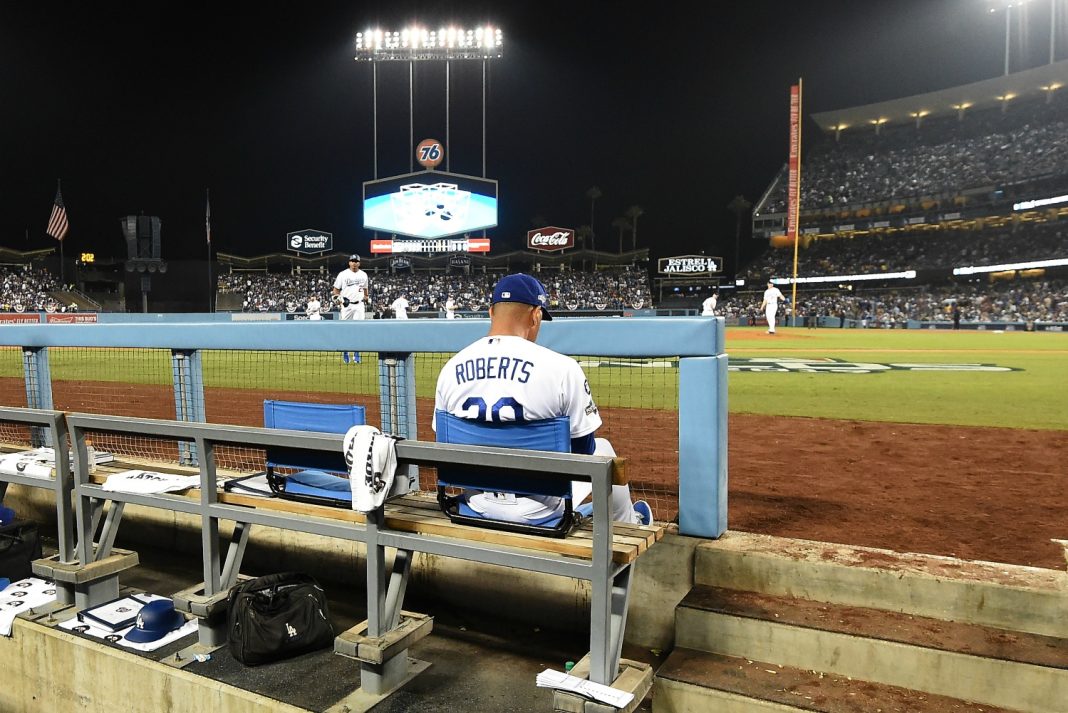 All season long, the Dodgers looked like a World Series team—and then the playoffs started.

Last night, in game five of a series that increasingly appeared to be an uphill battle, the Dodgers fell 3-7 to the Washington Nationals, a team that made it to the playoffs as the National League wild card. Things went awry in the eighth inning, when manager Dave Roberts relieved Walker Buehler and put in golden boy Clayton Kershaw. In what felt like seconds, Kershaw gave up back-to-back homers to the Nationals’ Anthony Rendon and Juan Soto, blowing a two-run lead in the blink of a eye and leaving the game precariously tied 3-3. Roberts swapped out Kershaw for Kenta Maeda, who handily ended the inning.

Then Roberts put in Joe Kelly. The very pitcher who was instrumental in the Boston Red Sox’s World Series victory over the Dodgers in 2018 allowed a goddamned grand slam in the tenth inning, all but sealing the Dodgers’ fate. (Everyone’s making the obvious joke that Kelly successfully ended two consecutive Dodgers seasons.)

That unfortunate performance took some of the heat off Kershaw (although the poor guy looked like a suicide risk for the remainder of the game and people were reportedly spotted in running over Kershaw jerseys in the parking lot afterward), but many are placing blame squarely on Roberts, who, to his credit, said, “If the blame falls on me, I’ve got no problem with it.” Owning up may not be sufficient.

In an opinion piece for USA Today calling for Roberts’s ouster, Josh Peter writes that “it’s time to end Roberts’ reign while acknowledging his accomplishments. During his four years as manager, the Dodgers have won two National League pennants, reached the National League Championship Series three times and won four National League West Division titles. But this team should be doing more.”

ESPN’s Jeff Passan dissected Roberts’s pitching decisions and the looming questions that resulted: Why not keep Maeda in? Why Kelly instead of Kenley Jansen? Why put in Kershaw to begin with? Passan summed it up thusly: “Kershaw was in the game because his name was Clayton Kershaw. Roberts appreciates who he is as a person and what he has been as a pitcher. In this situation, though—six outs separating the Dodgers from Game 1 against the St. Louis Cardinals, a bullpen full of superior matchups at his behest—urgency needed to trump loyalty and trust and history. If the back of his jersey did not read KERSHAW, Roberts would have had an awfully difficult time making the case to use him.”

After the game, Roberts defended his decision to put in Kershaw, saying, “I’ll take my chances any day on Clayton.”

"I'll take my chances any day on Clayton and it just didn't work out right there."
Dave Roberts discusses his thought process on the late-game bullpen decisions in tonight's #Dodgers defeat vs. Washington. pic.twitter.com/33qivOcCLO

In his op ed, Peter concludes, “The Dodgers’ best hasn’t been good enough. Given this club’s rich talent and generous payroll, it’s World Series-or-bust. And by those standards, Roberts is a bust.”

Be that as it may, the manager signed a four-year contract in December, and as ESPN concedes, “In many ways—from how the players feel about him to how well he represents the organization and brand—he is an ideal manager for this team and market.”

RELATED: This New Dodgers Podcast Is the Antidote to Bro-y Sports Talk