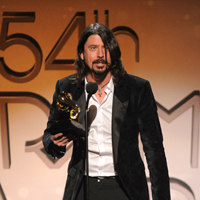 This year’s Grammy Awards left us with so many questions (Why was LL Cool J wearing velvet? Why did Bruno Mars look like wax? Why did Rihanna play with Coldplay? And why, Nicki Minaj, why?) that we didn’t lose a wink over Dave Grohl’s pro-analog acceptance speech for the Foo Fighters’ Best Rock Performance award.

Well, apparently he did. An email arrived in our inbox this morning from Grohl’s publicist with this clarification from the Encino resident and onetime Nirvana drummer:

“Oh, what a night we had last Sunday at the 54th Annual Grammy Awards. The glitz! The Glamour! SEACREST! Where do I begin?? Chillin’ with Lil’ Wayne…meeting Cyndi Lauper’s adorable mother…the complimentary blinking Coldplay bracelet…..much too much to recap. It’s really is still a bit of a blur. But, if there’s one thing that I remember VERY clearly, it was accepting the Grammy for Best Rock Performance…and then saying this:

Not the Gettysburg Address, but hey……I’m a drummer, remember?

Well, me and my big mouth. Never has a 33 second acceptance rant evoked such caps-lock postboard rage as my lil’ ode to analog recording has. OK….maybe Kanye has me on this one, but….Imma let you finish….just wanted to clarify something…

I love music. I love ALL kinds of music. From Kyuss to Kraftwerk, Pinetop Perkins to Prodigy, Dead Kennedys to Deadmau5…..I love music. Electronic or acoustic, it doesn’t matter to me. The simple act of creating music is a beautiful gift that ALL human beings are blessed with. And the diversity of one musician’s personality to the next is what makes music so exciting and…..human.

That’s exactly what I was referring to. The “human element”. That thing that happens when a song speeds up slightly, or a vocal goes a little sharp. That thing that makes people sound like PEOPLE. Somewhere along the line those things became “bad” things, and with the great advances in digital recording technology over the years they became easily “fixed”. The end result? I my humble opinion…..a lot of music that sounds perfect, but lacks personality. The one thing that makes music so exciting in the first place.

And, unfortunately,  some of these great advances have taken the focus off of the actual craft of performance. Look, I am not Yngwie Malmsteen. I am not John Bonham. Hell…I’m not even Josh Groban, for that matter. But I try really fucking hard so that I don’t have to rely on anything but my hands and my heart to play a song. I do the best that I possibly can within my limitations, and accept that it sounds like me. Because that’s what I think is most important. It should be real, right? Everybody wants something real.

I don’t know how to do what Skrillex does (though I fucking love it) but I do know that the reason he is so loved is because he sounds like Skrillex, and that’s badass. We have a different process and a different set of tools, but the “craft” is equally as important, I’m sure. I mean…..if it were that easy, anyone could do it, right? (See what I did there?)

So, don’t give me two Crown Royals and then ask me to make a speech at your wedding, because I might just bust into the advantages of recording to 2 inch tape.

Now, I think I have to go scream at some kids to get off my lawn.

Now we have even more questions! Like, what was Cyndi Lauper’s adorable mother doing accompanying her daughter to the Grammys (it’s no place for adorable!)? And what is Grohl’s favorite Josh Groban song? And how does Skrillex do what he does?

But one thing is clearer than ever: We heart Dave Grohl.