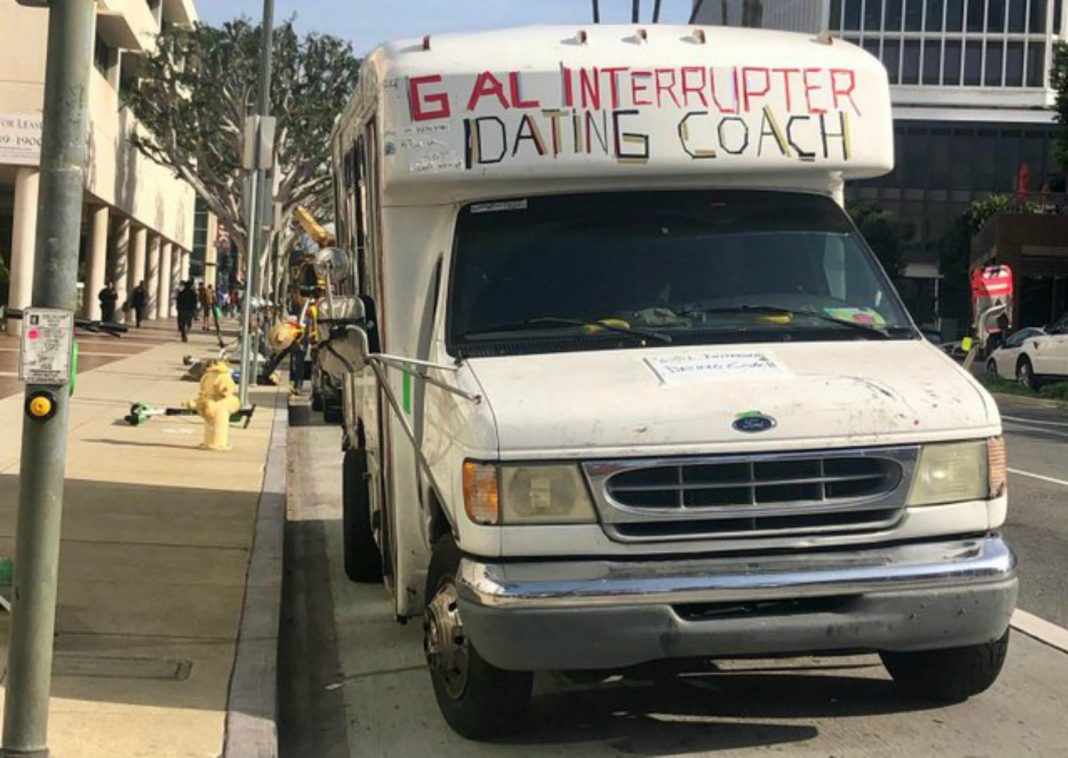 Perhaps you’ve seen this shuttle bus around town? It says “DATING COACH” in handmade letters on the side and looks a little bit like you might get murdered in it? That’s the one. Curious what kind of dating advice its owner might dole out, we reached out to the man behind the van.

Gal Interpreter (formerly Gal Interrupter), whose real first name is Zach, is either a pickup artist or an actual artist. He claims to be the latter. He bought the shuttle bus secondhand from a nursing home so he could live a less conventional lifestyle and travel around. He also wanted to freak people out. He was simultaneously fascinated by and skeptical of the pickup artist community (see: The Game) and started dispensing free dating advice in the back of the shuttle and on his YouTube channel.

Most of his videos have only a handful of views. They feature G.I. (what he calls his persona, not a reference to intestinal distress) driving the shuttle and giving advice to the camera as Google Maps chirps directions in the background. Some of that advice is earnest: He explains that an “abundance mindset” means believing that if one person doesn’t like you, the next will. And Zach says recording the videos is helping him work through his own toxic behavior, like trying to argue his way into relationships with women.

A lot of his other musings, though, are misogynist and racist. In a video titled “Cunts,” he reminds viewers that “the second any of these bitches matter to you, you’re fucked.” It seems relevant that during this dispatch, Zach is wearing a pair of yellow plastic-rimmed glasses and a crown made of ribbons (or those lanyards people make at camp?) Anyway, he’s also eating a banana. Later in the video, he adjusts the ribbon hat, tries on a choker and says that he’s “like a black girl, bro. Just piling fucking swag on swag on swag.” Some of the videos go on for what feels like hours but is actually only about 20 minutes. At the end, you’re not really sure what you just saw.

But he swears the murky message is intentional.

“It’s satire,” he says over the phone. “It wouldn’t make you as uncomfortable as it does if it was totally clear that it was satire. If I just wanted to fuck girls all day long, I would shut the fuck up and just do it on the down-low. I wouldn’t be making fucking art about it on YouTube and having every Captain Obvious come up and accuse me of this that and call me a creep and all this shit, you know what I mean?”

So is he a cultural critic or a shitty person saying shitty things and calling it fiction, like someone dissing you then saying JK? Maybe art is in the eye of the beholder—we’ll leave it to you to decide.

RELATED: The Woman Behind Bye Felipe Has Written the Ultimate Guide to Modern Dating