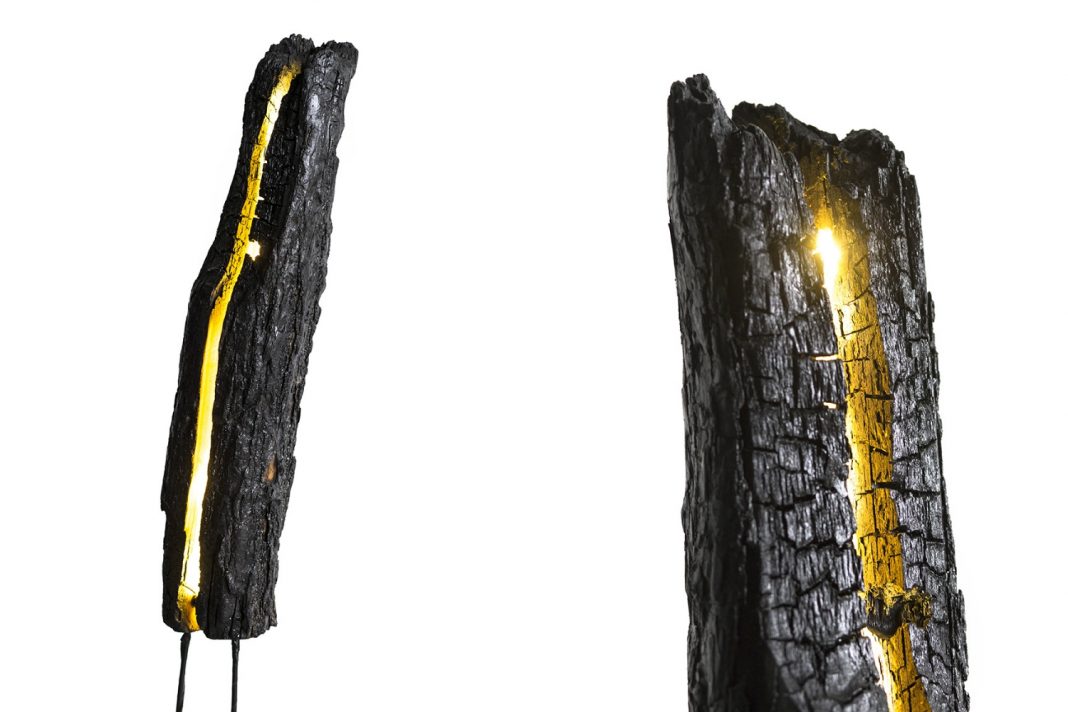 In 2016, Darren Sarkin was driving near Santa Clarita when he passed through an area that had burned in a recent wildfire. Struck by the terrifying, otherworldly sight, he pulled over, stepped into the charred landscape, and started dragging burnt logs to his car. He was drawn to the dead wood, although he wasn’t sure what he would do with it.

Sarkin, an artist and lighting designer based in downtown Los Angeles, soon realized he could repurpose the blackened pieces into light sculptures. He cut and carved them, wired them with LEDs, and added shards of recycled glass. The resulting works, lit from within, are vivid reminders of the deadly forest fires that have ravaged California in the past few years and that currently burn throughout the state. The pieces glow with an unexpected beauty, almost phoenix-like, as if they rose from the ashes on the forest floor to find new life as art.

Sarkin’s work creates a futuristic forest in a new immersive installation at Radiant Space gallery in West Hollywood. In the darkened room, mirrors and mylar reflect the glow of the artworks through pieces of translucent resin colored with vibrant alcohol inks. Sarkin says, “It feels very bright and dark at the same time. With the walls being mirrored, you’re going to see this forest around you of darkness and light, and that balance and life and death that’s just stretching onward.”

As an artist, he doesn’t shy away from big themes. He says, “Rebirth is just one stage—birth, life, death, rebirth—and when you go into this gallery I want to give the feeling of all of it at once, that there really is no difference between any of it if you look closely. At the moment, clearly these pieces are dead, but they’re coming to life.”

Visitors to Radiant Space can experience Sarkin’s art in a more personal way by stepping inside the Infinity Pod. From the outside, the wooden structure is relatively small—about 8 feet tall and 4-and-a-half feet wide—but inside, a dodecagon of mirrors makes the space feel endless. Between the mirrors, strips of programmable LEDs create mesmerizing patterns.

Sarkin knows that when people see themselves reflected from multiple angles amid the colorful lights, they’ll want to take a selfie. With that in mind, he’s installing a camera inside the pod that will email images to visitors. “With the LEDs and how intense the experience is, it can be difficult to get a good selfie in there,” he explains. “I wanted to make it a little bit easier for people, and also, I really would prefer to have them experience the art than be concerned about getting a good picture the whole time.”

While much of Sarkin’s art takes inspiration from nature, he sees the Infinity Pod as a meditation on city life. “My idea of having the pod with the sculptures is that this is the energy and frenetic feeling of being inside Los Angeles,” he says. “We’re surrounded with light and other people and ourselves.”

Throughout the exhibit’s run, the gallery is hosting events inside the installation, including live music and sound baths. The series kicks off with music performances by NK Riot on August 4, Veronica Bianqui and Monique Maion on August 9, and Tuff Ghost and Clio Wilde on August 11. View the full schedule on the Facebook event page.

Darren Sarkin’s work will be on view at Radiant Space, 1444 N. Sierra Bonita Ave., from August 4 to September 22. The gallery is open Saturdays and Sundays from noon to 3 p.m. and during special events. Admission is $5, which includes entrance to the Infinity Pod. A portion of the proceeds will be donated to the California Community Foundation’s Wildfire Relief Fund.

RELATED: Another Yayoi Kusama Installation Has Arrived in L.A.