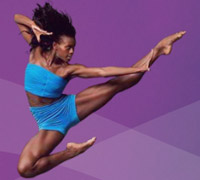 I told my friend I was watching Ailey at the Orange County Performing Arts Center last month, and, to my surprise, he asked, “What’s Ailey?” If you don’t know Alvin Ailey American Dance Theater (AAADT), you’re missing out. How many dance companies does Congress recognize as a “cultural ambassador to the world”? Even the Obama’s attended Ailey’s 50th Anniversary Kennedy Center performance last year. Since Alvin Ailey founded the all-black modern dance company in 1958, every AAADT production has synthesized poignant performers, refined technique, and universal stories of struggle and celebration. Friday night’s three-part program (part of a six-night run at the OCPAC) was no exception.

The first piece, Emmy Award-winning Hymn, was originally choreographed by artistic director Judith Jamison in 1993 as an homage to Ailey. A herd of muscular, shirtless men and women in backless leotards evoked the awe-inspiring power characterizing the company. They displayed a masterful fusion of modern, jazz, and African dance techniques—sharp, dynamic movements, crisp bodylines and vigorous walks accompanied heavy drumbeats and fast, eclectic sounds. My eyes widened and I scooted towards the edge of my seat. Shouts of “Mm hmm!” and “That’s right!” from the audience echoed around me. This company knows how to deliver.

Hymn also used dancers’ recorded voices instead of typical music. They spoke lovingly of Ailey and his appreciation for individuality. Soloists told personal stories with their articulate bodies. My favorite solo, “The Mask,” criticized the ways in which we conceal vulnerability. On the contrary, what I love most about Ailey dancers is their unabashed honesty. They give everything and expose everything, divine strength and human weakness. Ailey’s bottom line—“the human spirit, reaching people and making dance accessible to all”—resonates through their every move.

The message of the second work, Episodes, choreographed by Ulysses Dove, proved more ambiguous. Four women and five men engaged in intertwining partnerships and group phrases. They danced within the parameters of an expansive, stage-lit “X”, a crossroads of sorts. Dramatic, sensual love triangles hinted at a theme of dysfunctional relationships, but the abrupt group ending lacked a sense of closure and left me slightly unsatisfied.

AAADT’s signature closing, however, put me back on track. Revelations is a classic. Using African-American song-sermons and gospel music, Ailey choreographed this 1960 tribute to his cultural heritage, but the beauty of the work lies in its universality. The male soloist’s deep longing and desperation in “I Wanna Be Ready,” the excitement and determination of the explosive trio, “Sinner Man,” and the celebratory joy in the finale, “Rocka My Soul in the Bosom of Abraham,” transcend ethnic and temporal boundaries. A depiction of African-American life becomes a journey of human nature.

I left the theater with two AAADT souvenir T-shirts and a revitalized spirit. While I enjoy all of those popular dance TV shows, dance isn’t meant to be paused, rewound, or viewed in 2-D. Live art breathes in the present moment. Thank you, Ailey, for the reminder.