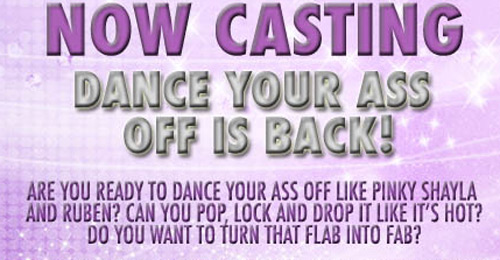 When I take hip hop class at Millennium Dance Complex in North Hollywood, I’m usually surrounded by skinny dancers in oversized T-shirts and baggy sweats. On Nov. 21st, however, I encountered a long line of oversized people waiting to audition for season two of Oxygen’s Dance Your Ass Off, a reality TV competition that combines The Biggest Loser with So You Think You Can Dance. Full-figured contestants perform different dance styles with professional partners each week. Dance scores + weekly weight loss = contestant’s overall scores, which determine who goes home. Got all that?

First in line was Marcus Hicks, a 400-lb man who had taken a nine-hour overnight bus from Richmond to audition. His doctor diagnosed him with high blood pressure two years ago and cutting back on salt hasn’t done enough. His situation, along with diabetes, heart attacks, and the fear of not getting to watch kids grow up was common among the crowd.

Actor/comedian Mitchell Gordon, a.k.a. Izzy Real “The Original Jewish Rapper!” was there too. He lost 300 lbs. after gastric bypass surgery in 2003, then gained half of it back. Wearing a sideways cap and some serious Star of David bling around his neck, Izzy bragged about rapping onstage with Jimmy Fallon at the Grove and his work as a body double in the season finale of Nip Tuck. “I’m tired of being typecast as a big actor,” he said, lifting his shirt and grabbing extra skin. “My body is malformed, but I don’t go to the gym. I need someone to push me.”

In the audition room, contestant hopefuls answered personal questions and freestyled to a pop song for the camera. I smiled as they fearlessly booty-popped and leapt across the floor. Those with likeable personalities, natural rhythm, and dramatic stories (a former addict cited drugs as her only weight loss strategy and a deaf woman from Compton proved that you don’t need to hear to dance) made it to choreography callbacks the next day. Marcus and Izzy made it through.

I usually despise reality TV contests, but witnessing the audition opened my mind. Glitz and glamour aside, each dancer expressed the simple hope of a healthier life. This show, I realized, is truly for them. If viewers, in turn, are inspired to get off of the couch, it’s a win–win situation.

“We look for expression and passion,” explained executive producer and judge, Lisa Ann Walter. “Someone who commits 100%. And we want to know, what motivates them to do it?” Walter, an actress who has struggled with body image herself, said that dancing allowed her to regain self-confidence after an unhealthy divorce—and led her to create the show that shed a combined 500lbs. off of last season’s contestants.

Will Marcus and Izzy be next? Season 2 airs in 2010. As the show says, may the best dancer lose.