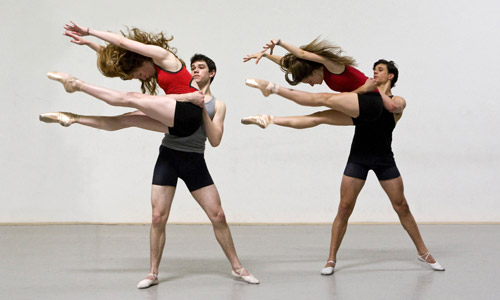 So You Think You Can Dance, the talent show searching for “America’s favorite dancer,” premiered in the U.S. on July 20, 2005. I covered the show then for another publication—not because it was a good source for breaking entertainment news (it wasn’t. I was the only reporter who attended every taping that season) but because the show’s judges, producers, and growing audience were so excited about making dance popular programming I had to stick around to see if they actually would. Dancing With the Stars had aired for a short run that June, and people were starting to talk about rumbas and sambas and pas de deux. It didn’t hurt that the dancers were fantastic.

Since then, they’ve gotten better, and so have the choreographers featured on the program. On Sunday, three of them—Mandy Moore, Travis Wall, and Sonya Tayeh—premiered new works with the Los Angeles Ballet at the intimate Broad Stage in Santa Monica. Josie Walsh, a choreographer not (yet?) featured on So You Think You Can Dance also debuted a piece.

It would be too little to say the works, collectively titled “New Wave LA,” were thoughtful and well danced. Josie Walsh’s Transmutation, about the interplay between male and female energies, was dark, sexy, and a little dangerous. Sonya Tayeh’s the back and forth was an entertaining bull fight of a dance. But Mandy Moore’s Wink and Travis Wall’s Reflect. Affect. Carry On… showed off the medium’s narrative power. In Wink, the moments when the dancers’ movements came together and broke apart made a larger statement about dating: We all strike similar poses when starting relationships and end up having the same fights; it’s how we communicate with our partners—how couples individualize their patterns—that facilitates lasting love. In Reflect. Affect. Carry On…, dancers standing in for archetypes like “the invisible,” “the careless,” and “the heartbreaker” moved like weightless puppets around a living room set, striking poignant line after poignant line. When the female dancers, their knees bent and arms stretched up and out behind them, gripped their partners’ shoulders as if clinging to a cliff, I shook my head in awe, then hoped that Wall—and dancers as talented as the Los Angeles Ballet company—return to So You Think You Can Dance for the show’s tenth season, which began last week.  They deserve that big a stage.

So You Think You Can Dance  airs Wednesdays and Thursdays on Fox.