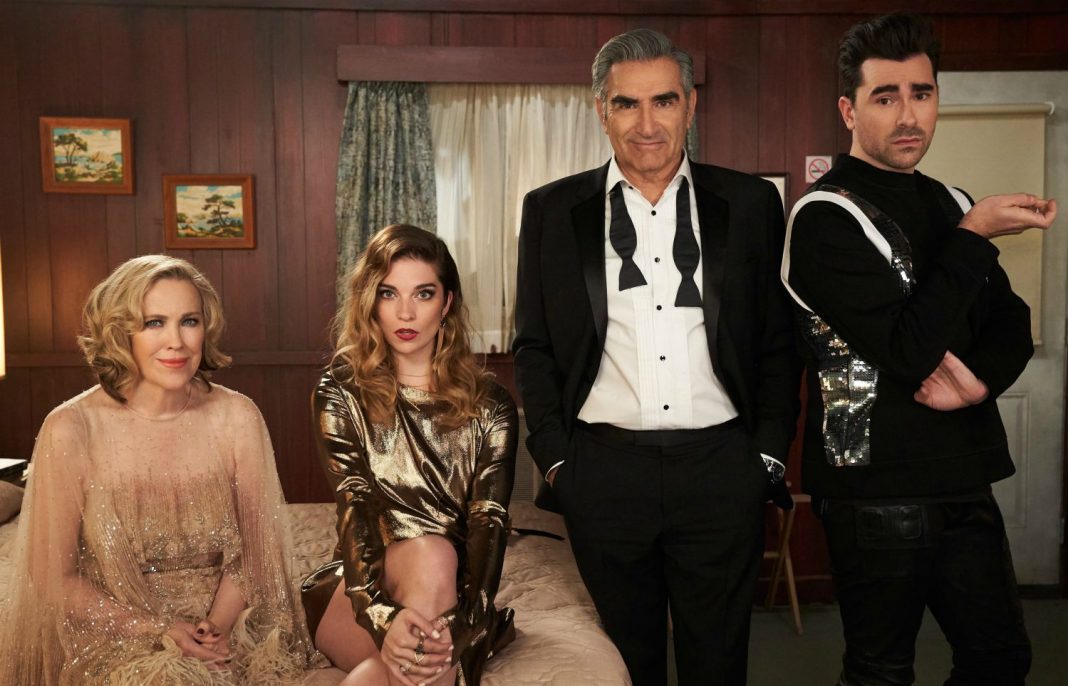 For six seasons, Dan Levy starred on Schitt’s Creek as the once-rich son of a once-rich dad (played by his real-life dad, Eugene) who finds himself, along with the rest of his family, broke and living in a seedy roadside motel. In addition to playing David Rose, the show’s spoiled, openly pansexual clotheshorse, the 36-year-old Levy was also a cocreator and the showrunner. The series, which airs its finale on Pop TV tonight and is streaming on Netflix, not only is hilarious, it also presents a vision of what the world might look like if folks were just a bit nicer to each other. It’s a perfect binge for our current housebound moment. On a recent morning Levy talked with Los Angeles about the show, his prefame days in a Kelly Clarkson video, and what it means to make comedy when times are dark.

I wish we could do this in person, but we’ve all been told to stay in. Just so we can set the scene: Where are you, and what are you wearing?

I’m at home [in Los Feliz] in gym shorts and a hoodie. I’ve officially stopped dressing for anybody, let alone myself. It’s all about comfort and ease.

So you’re sheltering in place?

I am self-quarantining with my canine companion, Redmond. He’s a 14-year-old corgi-dachshund mix. For the first time his dad is home for a decent period of time, so there’s a silver lining for him at least.

If you weren’t on lockdown, who are the three people, living or dead, whom you’d want to go clothes shopping with?

Paul Newman. Harry Styles. And … Lizzo. I feel like I’ve got all sartorial bases covered with those three.

What are you doing to keep yourself occupied?

I just finished the latest season of Elite, which is a Spanish teen soap opera that I love very much. Up next is the latest season of Homeland, and I’m taking up cooking for the first time. But I’m also trying to stay focused on some work that I have to do. I feel like regimented days are really important now. I was sort of wandering through my house reading the news, and then suddenly it was 8 p.m. So I made a very quick decision to implement a schedule and stick to it.

I have to admit, I resisted watching your show even after everyone was raving about it. I didn’t think I’d like a show about a bunch of rich assholes. But, of course, that wasn’t what the show is at all.

Well, I’m happy to have pleasantly surprised you! The whole premise of the show is about how a family that used money to fix their problems and to represent love and to bandage any conflict is put in a situation where they don’t have that luxury. So what does love look like, what do conflicts look like, when all you have is each other?

It seems like a particularly welcome message right about now.

Yeah, we saw a rise in viewership a few years back when someone came into power and people were looking to television shows for a soft place to land for 20 minutes a week. Once the government shifted, the responses we were getting from viewers wasn’t just, “Hey, fun show.” It was like, “Thank you for making me laugh in some dark times. Thank you for alleviating some of the weekly anxiety that I have.”

There was a big billboard on Sunset Boulevard a few months back of you and Patrick (David’s fiancé on the show, played by Noah Reid) kissing. Was that important to you?

We’ve seen it all the time with rom-coms and straight couples, and yet I’ve never seen it with a gay couple, and I didn’t know when I’d have another opportunity to put a billboard out in the world that shows two men kissing. For the longest time couples of all different shapes and sizes were taking pictures of themselves kissing in front of it.

Years ago you were in a music video with Kelly Clarkson for about a half second. Would you do another?

You’d have to ask her, but I am willing and able to do that at any time. It’s always fun to get to meet people you really love, particularly in music, because music plays such a formative role in how I write. Any time I get the opportunity to meet an artist that has played such a crucial role in the creative process, I always feel like I know them way more than I actually do.

What’s the nicest thing a fan has said to you?

Oh, goodness. I keep every letter that’s been written to me. People have written in to say that the show has quite literally saved their life. They were suicidal and found the show, and the show had comforted them and talked them off a ledge. I’ve received letters from young queer kids who have told me that they’ve used dialogue from the show to come out to their parents.

What’s coming up for you?

We just finished shooting Happiest Season [a romantic comedy in which Kristen Stewart hopes to propose to her girlfriend, only to discover that the girlfriend hasn’t come out to her conservative parents yet], which comes out in November. This is the first film I’ve done in quite some time, and to be a part of a movie where we have two female leads falling in love with each other, that was a real treat.

I can’t give too much away, but it’s definitely tongue-in-cheek. It would not be a holiday movie without major conflict.

What are you going to miss about the show or working with your dad?

I think just getting to see my family on a regular basis. Not that I don’t see them all the time. When we’re not in Toronto, we’re here. But I think I’ll miss the same thing that I’ll miss working with the rest of our cast and crew: getting to laugh with people and getting to create with people that you really love and trust and admire.

RELATED: After 40 Years in Comedy, Catherine O’Hara Is Still One of Our Finest Imports

Dustin Milligan on Comparisons Between ‘Schitt’s Creek’ and ‘Rutherford Falls’