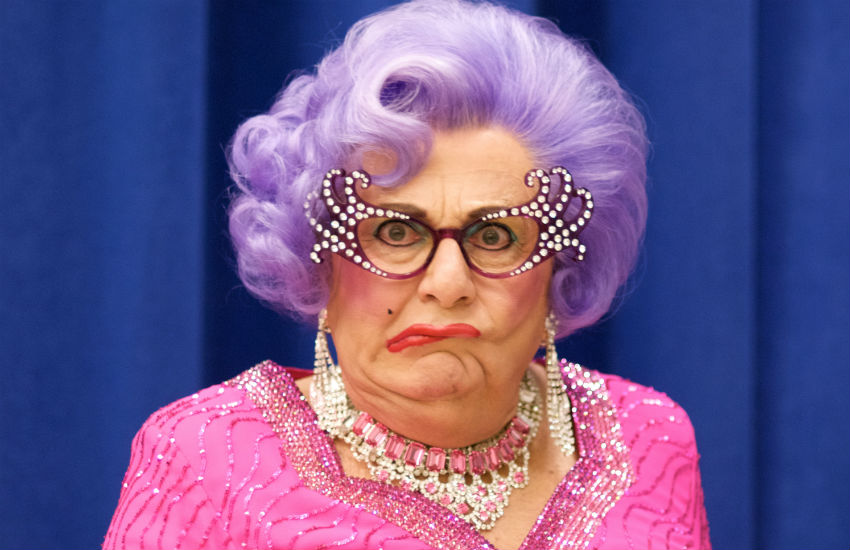 It’s likely one of the last times an L.A. audience will hear the famous words “Hello, Possums!” when Australian comedy icon Dame Edna stops by the Ahmanson Theatre on Saturday. The grand dame of cultural satire is retiring her cat eyeglasses and purple wig after the current tour Dame Edna’s Glorious Goodbye wraps up. Dame Edna first appeared in 1955, when Australian satirist and comedian Barry Humphries was entertaining his fellow actors in a touring theater company. As the character developed so did her appeal. In the ‘80s, Dame Edna’s biting satire and commentary on social issues in Australian society and witty critique of the entertainment industry garnered her a hugely successful TV talk show and opened the door for the Dame overseas.

At the age of 80, Humphries—who is really just Dame Edna’s manager—is calling it quits after the farewell tour (although, Humphries has retired the starlet before only to return her a year or two later, so who knows).

How’s it going Dame Edna?
“How’s it going?” I love that expression. I’m so happy to be in the United States again. You took me to your heart many years ago. I’m not really an actress; I’m just really an Australian housewife but I have the gift of communicating to people. I think I’m a refreshing change from all those people who call themselves standups. I am a sit-down performer. I don’t believe in standing up, using curse words continuously like good ole Mr. Maher’s TV show. I quite like that fellow, but I think his compulsion to use the F-word tends to diminish his strength.

I did have a widely influential talk show in the ‘80s and early ‘90s. It was called the Dame Edna Experience. I keep seeing things that I introduced then copied by other people. For example, if I didn’t like a guest I had a staircase which had a lot of booby traps on it, so at the touch of a button I could abort the guest.

How are you enjoying the town of Escondido?
What was it that Gertrude Stein said about Los Angeles? She said “There’s no there, there.” I think that applies more to Escondido than to Los Angeles, frankly.

This is a provincial tryout for my world premiere in Los Angeles, and I’m going to go where I always go, to the Ahmanson Theatre. It’s quite intimate and it’s led to such wonderful things for me. When I was in Los Angeles a few years ago I was on the stage of the Ahmanson, and my dresser said, “Oh, there’s David E. Kelley.” And I said “Who in heaven’s name is he?”’ and she said “Well, he’s married to the famous glamour puss Michelle Pfeiffer.” I went on stage and I said, quite truthfully, that I was in litigation with Barry Humphries, my manager, who has embezzled me for many, many years.

Why do you put up with all of embezzling?
I have not been able to legally restrain him. He signed me up. Have you signed a document to anyone? Have you?

Not really.
Don’t. I signed this anyway and it meant Barry Humphries could filter my money through his own pocket. Fatal. I said to the audience, this is 10 years ago at the Ahmanson, I said “I need a lawyer, I need a woman. I’d like to engage Ally McBeal,” and there was a little flurry in the audience. The next day I got the call from David E. Kelley, and he said “Dame Edna, would you like to be a guest on my TV show Ally McBeal?” I went down to the studios and they dressed me up and they gave me a script. He invented a character for me to play. There are roles I could play. Can you see me playing Lady Macbeth?

I could see you in Who’s Afraid of Virginia Wolf.
Yes, playing the female part of course. There are so many lovely rolls. I was very honored and went down. The character he had written for me it wasn’t a bit like me. I had to rewrite it quite extensively. Someone said to me later “No one ever rewrites David E. Kelley,” but I did. They wanted me on every episode after that and I like to think that I brought the series to a close.

I’m going to invite all of those David E. Kelley officials to my show. If you come to see me, it’ll be star-studded. I do have a bit of a dress code. I wear three fabulous gowns in this show, I sing six songs, I dance, I counsel, I interact, I do a lot with the audience.

You must compete with some really storied actresses for roles.
The Queen said she was heartbroken I didn’t play her. I’m going to be in an episode of Downton Abbey coming up soon. I’m prepping for all sorts of exciting things. I know a lot of people in L.A.

When I did a show in London about 20 years ago, Joan Rivers came to see it. She wrote me a fan letter and we became very, very close. In fact, Melissa is my goddaughter.

I didn’t know that.
Yes. Vincent Price introduced me to her. Los Angeles is home away from home for me. I go all over the place. I know the museums. I love browsing in Melrose or Beverly. There are even a few bookshops I love. Book Soup I like, don’t you? I’m sad that Tower Records is gone. It’s a sign of the increasing philistinism of Los Angeles, to take down bookshops. People would rather get electronic things. I like going up to Mulholland Drive and the little parks there. I like crossing over into the Valley and trying to find an orange grove; I don’t think there’s one left.

I like very much all the health food places. I like to have those wonderful, wonderful salads that you make in Los Angeles. You can eat so well there and always lovely, lovely waiters there, with little short white socks and tans all wanting to be actors. Everyone is an actor. I just like wandering the streets in Holmby Hills. Beautiful houses and not a single other pedestrian, no one walking. I have the streets to myself. I love to walk, I wear those little track suits; no one recognizes me.