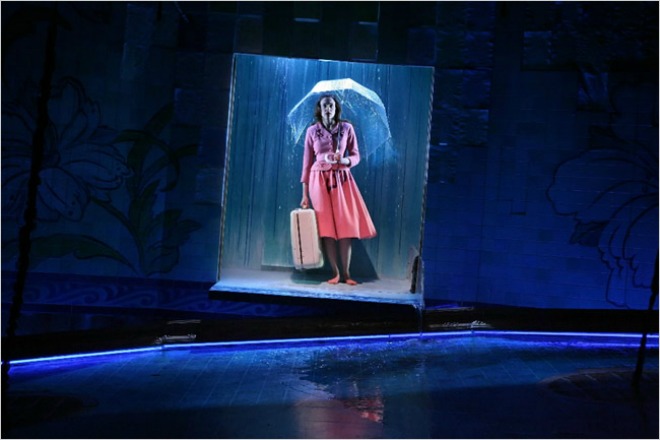 Playwright Sarah Ruhl was only 20 years old when her father died of cancer and she was 27 when she began writing Eurydice as a student at Brown University. Originally a poet, Ruhl reframes the classic Greek myth as an ode to her father, relying on strange, beautiful language and arresting imagery (a raining elevator, a house made of string) to communicate the depths of her grief.

The classic theater company A Noise Within will mount Ruhl’s reimagining with a production that opens March 16 (previews begin March 9). The show runs through May 19.

The original story turns on the god of music’s efforts to reclaim his bride after she gets spirited away to the underworld. He famously looks back as he leads her out of hell, losing her forever. Ruhl’s version recenters the story on Eurydice and her twin loves for her husband and dead father.

Lured to the underworld on her wedding day by a Nasty Interesting Man, Eurydice wakes up in an underworld where she remembers nothing; she believes her father is the hotel porter. Of her husband, she recalls, “I know his name starts with my mouth shaped like a ball of twine—Oar—oar. I forget.” In Ruhl’s retelling, the lover of words becomes the author of her own sorrow.

A Noise Within’s staging will star Jules Willcox as Eurydice and Graham Sibley as Orpheus, with director Geoff Elliott as the father. The production will also incorporate original compositions by violinist Endre Balogh, giving new prominence to Orpheus’ somewhat backgrounded role. Balogh has performed as a soloist with the Los Angeles Philaharmonic and composed for previous ANW productions.

“Endre is a brilliant composer and violinist. He is not so much the embodiment of Orpheus as much as his music supports the whole,” says Elliott. “The image of string and the actual use of string figures prominently in the play. The delicate simplicity of the single violin, a stringed instrument, is the perfect compliment to this piece.”

You can buy tickets here.

How One of L.A.’s Indie Theater Companies Has Managed to Stay Alive for 25 Years (and Counting)