Home Books For Cyrus Grace Dunham, Gender Is a Journey Without a Clear End 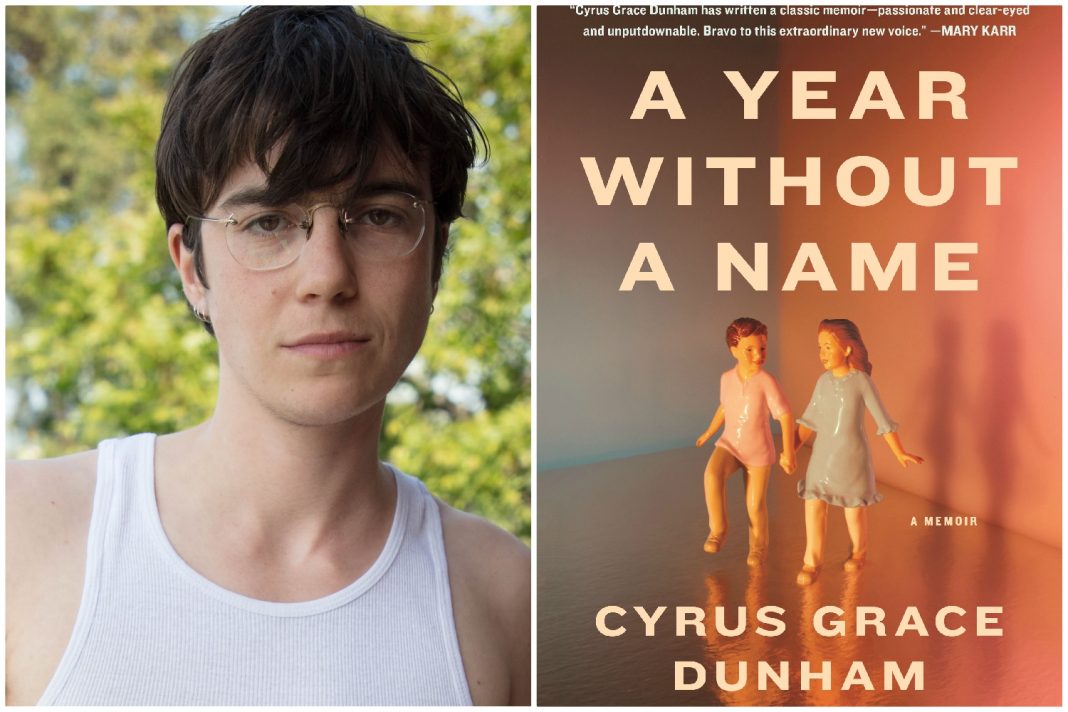 In the prologue to their memoir, A Year Without a Name, Cyrus Grace Dunham warns that their story has no resolution—and not just because they’re only 27 years old. Dunham reflects on experiencing gender dysphoria, which led to a complicated relationship with their family, including famous sister Lena, and transitioning from a woman to a man. Though a transgender male, Dunham identifies as gender non-binary, using the pronouns they/them/their. For Dunham, navigating through gender identity issues is a complex and continuous road.

The crucial year the author-activist chronicles is approximately between January 2017 and September 2018, but Dunham recollects being uncomfortable in their skin as early as age five.

As a kid, Dunham often felt and acted like a boy. “I remember when I was little I had to wear a dress to my aunt’s wedding,” Dunham says outside a coffee shop in Glendale near their home in Glassell Park. “I was a flower girl. And I just sobbed and sobbed and sobbed. I was so mad about having to wear a dress. I just spread my legs and started peeing everywhere. That was my active protest.”

“For most teenage girls there’s a lot of shame,” says Dunham. “Suddenly you’re going from being a child to being sexualized. It’s traumatic for anyone. Things that trans people go through are things that many people relate to. We’ve all had this experience of feeling that there’s this feminine ideal or masculine ideal and were failing to be that.”

They developed an eating disorder, an obsession with staring in the mirror, and panic attacks. Dunham recounts a particularly bad breakdown at the premier of sister Lena’s HBO series, Girls. (You may recall Dunham played the overachieving kid sister in Lena’s 2010 feature film, Tiny Furniture.)

“It occurred to me that my body was not mine,” writes Dunham. “Neither was my brain. Grace? Who is Grace? I was a cloud stuck inside a person I didn’t choose to be.”

Dunham doesn’t mention the names of their sister or parents, but fully delves into the family dynamic and how it further fueled their gender confusion; Dunham was at odds not only with being a woman, but a daughter and sister, not to mention their sister’s celebrity and its superficial downside.

“My parents had such a deep attachment to having two daughters,” says Dunham. “We were a family with two sisters. I saw myself so deeply as the younger sister, especially when she became such a public person. And when I got a little public and visible in relation to her, it started to loom over my sense of self. My identity was made up of these parts.”

At 17, Dunham came out as a lesbian. They describe several intense intimate relationships with both women and transgender people who made Dunham feel comfortable acting like a man. “I got to be more authentic in my relationships,” says Dunham. “They were spaces of trust. In sex, I got to stop being a woman for a little bit.”

But binding their breasts and dressing masculine weren’t enough for Dunham.

In a letter to their parents, Dunham writes: “I am trans. Fully, deeply trans.”

After moving to L.A. a few years ago, Dunham decided to start medically transitioning to a man and “correct my aberrated condition.” First, they go from Grace to Cyrus (a name Dunham’s parents had considered while they were expecting) and later, testosterone injections and a double mastectomy, the physical and emotional process of which Dunham explores in detail.

Still, Dunham says they go back and forth between man and woman, floating in the middle of both genders, that uncertainty the heart of their account.

“I hope people who read it are a bit less alone in their confusion and accept parts of themselves that feel like a failure and feel like shame.” says Dunham. “There’s infinite ways transness can look and feel.”

RELATED: For Trans Angelenos, a Job Fair for Gender-Diverse People Can Be More Than a Place to Find Work