Home Books C.W. Neill Cashes in With His Book of Unfinished Screenplays 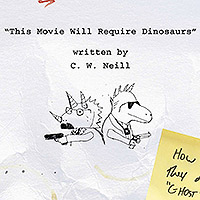 C.W. Neill can officially add an author credit to his resume: This month, the actor and comedian released This Movie Will Require Dinosaurs (Perigee Trade, $15), a book based on his “Unfinished Screenplays” blog (required reading for any Angeleno who has struggled with writing a feature film). Here he talks velocicoppers, the difficulties of writing, and the “Three F’s” of comedy.

Where did the idea for Untitled Screenplays come from? Did you ever intend for it to turn into This Movie Will Require Dinosaurs?
A couple of years ago I was trying to write a very stupid comedy sketch to shoot with some friends, and I literally couldn’t even start it. I was so frustrated because I knew all the jokes, but I couldn’t start the damn thing. So in my frustration, I wrote: INT. I DON’T KNOW, AN APARTMENT? DAVE sits on the couch or whatever. Maybe he’s standing it doesn’t matter. Then I sat back in my chair, stared at it for a couple seconds, and realized it was probably the funniest thing I’d ever written. And now that’s the very first “screenplay” in the book.

I knew [the concept] would translate well into a book, and I would even joke to my friends about “getting a book deal any day now.” But I was honestly very surprised when it all happened. I thought I had accidentally pulled a very elaborate prank on everyone involved.

What is your favorite Untitled Screenplay? Why?
It’s a two-way tie between:

INT. MY PANTS
The party is in full swing.

EXT. MY BUTT
A FART exits.

For me, they’re both the simplest and purest form of the joke. There’s a slight break in reality, a reference that everyone can understand, and most importantly, almost an entire page of blank space (which is my favorite element of the entire concept). More than half the book is goddamn blank space.

The book is billed as a peek into the life of a struggling screenwriter. Have you ever written a full-length feature? Or have these abridged screenplays always been the endgame?
Never. Not even close. I’m three-fourths of the way through an outline of one, though. The endgame is still up for grabs. Whatever lets me not need to deliver pizzas anymore. What makes you laugh?
A bunch of stuff makes me laugh. It’s one of those things I never care to pinpoint or pick just one answer. But for the most part I stick to “The Three F’s”: Farts, Friends and Follies.

“Amy” appears as a character in a number of pieces. At first she’s “the most beautiful woman in the world,” but by the end she’s “not that important” and a “dumb idiot.” Bad breakup, or is her character made up?
Amy, along with C.W. Neill himself, is a character. Overall, my life has been very nice and pleasant (see: “boring”), so it was much more interesting and fun to create a character that lets his daddy issues, lack of understanding of women, potential racism, and obsession with an ex that broke his heart infiltrate his writing. Also, it just made it that much easier to keep pretending like I have everything under control.

“This movie will require dinosaurs” appears as a note in a number of your Untitled Screenplays. Was that always the top title option for your book? What were some other working titles?
The only other working title was “Untitled Screenplays.” But I made the “this movie will require dinosaurs” joke in the proposal, and multiple people said it would make a good title upon reading it. I only needed to hear it once. It’s too perfect.

What can your Untitled Screenplays fans look forward to next?
Velocicoppers. That’s all I’m thinking about right now. There are multiple references to “velocicoppers” in the book, which is C.W.’s blockbuster film idea about velociraptors who are also cops. It’s Dinosaurs, the T.V. show, meets Lethal Weapon. So I’d really love to publish the full Velocicoppers screenplay someday. But first we gotta make sure this book sells big time, so get out there and pick up your copy today, you reader, you!

Neill will appear at Meltdown Comics Tuesday, July 29 for a book signing and a performance of his favorite scenes from This Movie Will Require Dinosaurs.