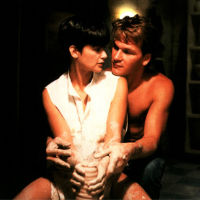 You remember the pottery scene, the strains of “Unchained Melody,” the subway chase. You remember Whoopi Goldberg housing Patrick Swayze’s spirit so he could communicate with Demi Moore. If you loved the 1990 movie Ghost and didn’t think it could be turned into a musical, you weren’t alone. No one was as skeptical as the film’s screenwriter Bruce Joel Rubin. But the show he wrote, Ghost: The Musical begins its run at the Pantages Theatre before moving to Costa Mesa’s Segerstrom Center for the Arts in late July.

The film starred Swayze and Moore as a couple who are separated when Swayze is murdered. After death, his “ghost” hangs around to protect her from harm, but he has to use a medium (Goldberg) to talk to her. The film grossed $580 million worldwide and earned Rubin an Academy Award.

For years Rubin had been pitched the concept of creating a musical based on the movie. He resisted until one longer-than-expected meeting and a missed train led to an almost mystical vision. “Somewhere in the middle of that,” says Rubin during a conversation in the Pantages Theatre, “I had an image of what a production of the show could look like. I called it ‘the gray zone,’ as opposed to the Technicolor vision of the movie. There are other worlds in Ghost that could be musicalized and sung; they would deepen our understanding of [the characters] and give us another emotional approach to the story. It felt like something I’d like to see.”

“I watched Billy Elliot, which I enjoyed as a movie and loved as a musical. I thought they had a lot of room to reshape the story. I looked at my own show and realized it’s so heavily plotted that I didn’t have room to tell a different story. I guess we could have told Oda Mae’s story. Or the version they wanted to do after the film opened where he comes back, she’s pregnant, and he has a daughter. But I don’t think the audience is going to want to see that. I think there’s something about the original idea, the ‘one last moment with somebody you haven’t been able to complete,’ that is so precious to people.”

After deciding to move forward, the road was anything but smooth. “My first version of the show probably ran 3-1/2 hours,” Rubin says. After things didn’t work out with an initial composing team, he started writing songs himself. “I said I could write songs as good as their initial lyrics looked to me. So I sat down and wrote 20 songs having never ever written a song. And they’re not bad. Some of them were even kind of good, but I’m not a songwriter. When we finally got Dave [Stewart] and Glen [Ballard] to do the music they looked at my lyrics and said ‘We can do this.'” Ultimately Stewart & Ballard wrote all the songs though Rubin admits, “I have what would be my private album of my songs which I love beyond belief.”

Though it had a successful run in England, Ghost didn’t fare well in New York. The show closed after 39 previews and 136 performances. Among the reasons Rubin believes the show failed in New York is that “everybody has a real need to capitalize on their best or most popular works.” Is he doing the same thing by creating a musical from his biggest success? “That’s a very good question. I didn’t do it for that reason. In the end it was for me: I got to play in the theater. I was a kid from Detroit. I used to usher at the Shubert Theatre. My early dreams were not movies. My early dreams were this,” he says, pointing to the theater in which we’re sitting.

With the ups and downs of this project, is Rubin ready for another major show? “I don’t think I’m doing further work in film or theater,” he says. “I’ve been asked to do another musical; I don’t know whether I’ll do it. I’m writing two TV shows; whether they go forward, I don’t know. The only thing I’ve learned from this show is there’s an inexhaustible joy in making people happy.”