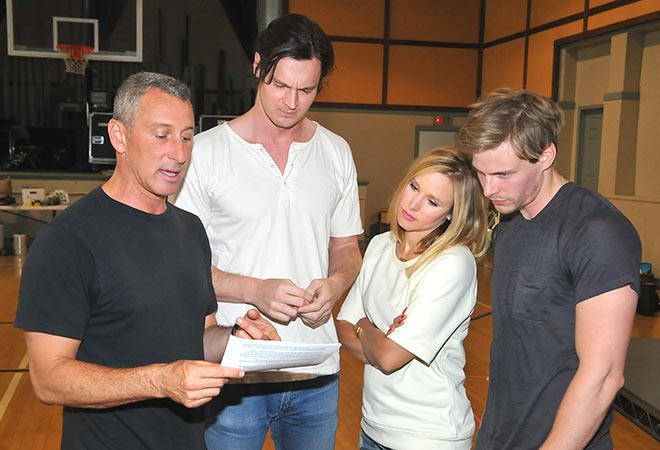 A theatrical production with nudity, coarse language, explicit sexuality, and strong political themes might not be among the shows most venues would consider booking. At the family-friendly Hollywood Bowl, it’s even more surprising. This weekend the 1967 musical Hair will be performed at the 92-year-old amphitheater as part of its annual Broadway at the Bowl event, joining a roster that includes Chicago, Guys and Dolls and Hairspray. For this three-night gig, Adam Shankman, who directed the 2007 film version of Hairspray, will serve as choreographer and director while Brian Grohl produces.

“Hair has always been on our list and this was the year the stars aligned for us,” says Grohl. “We decided last fall that Hair was going to be the show for this summer.” When it came to selecting a director, the choice was obvious. “Adam does such fresh, creative, and unencumbered things with material that existed in other forms. Bringing the show into a new space but staying true to its initial spirit was really what brought us to him.”

Hair began its life at the Public Theatre in New York and went to the Biltmore Theatre on Broadway within a year. For a musical with hippies protesting the Vietnam War, polyamorous relationships, and nudity at the end of the first act, it was a surprise success and ran for nearly 2,000 performances. Among the show’s best known songs are “Aquarius,” “Easy to Be Hard,” “Let the Sunshine In,” and “Good Morning Starshine.”

In 1979 Hair was turned into a film directed by Milos Forman (One Flew Over the Cuckoo’s Nest, Amadeus) and choreographed by Twyla Tharp. Thirty years later it returned to Broadway after playing the Public Theatre’s Shakespeare in the Park Series the previous year. The Broadway production won the Tony Award for Best Revival of a Musical in 2009.

Understanding the show’s history and how to adapt it to the vast expanse of the Bowl stage was Shankman’s first challenge. “We don’t have the ability to go into the audience much,” he says. “There’s a lot of direction about [that] written into the script. Instead of us going out to them, we blow past the walls. We try to invite them to us.”

This production will have a larger cast than usual with 35 tribe members (including Kristin Bell, Sarah Hyland, Hunter Parrish, Amber Riley, and Jenna Ushkowitz) plus Kevin Chamberlin and Beverly D’Angelo (who played Sheila in the film) in what Shankman calls “advanced cameo roles.”

Shankman’s second challenge was time: He had to put the show together in only two weeks. Rehearsals began last week and the show opens this Friday (August 1). “I don’t want to cry in this interview,” he says. “It is surreal. I can’t speak for everybody who’s been before me, but I vastly underestimated the amount of work. I think in the past they have often hired principals or large groups from other iterations of the show. I happened to not have done that by accident. But I love my cast and the enthusiasm couldn’t be higher.”

Shankman never saw the 2009 revival of the show, but he was familiar with the film. “The book of the play is literally nothing like the movie. There are things I liked about the movie like the amount of dancing. So we’ve added that. The costuming was really brilliant. We are trying to tone down the psychedelic nature of the costumes. This is just a staged celebration. It’s like a concert with some dancing in it.  Something’s happening over there and over there. There’s always something to look at.”

Created by Gerome Ragni, James Rado, and Galt MacDermot, Hair was an overt critique of the Vietnam War. Given the current state of global affairs, does Shankman worry the play is outdated? “One of the things I’ve discovered is that the politics of power are always going to be fear-driven. A notion of a utopian society is a fictional notion. It seems to eliminate all notions of human behavior and instinct and fear. You’d have to eliminate fear in order for this play not to be relevant. So topically I don’t think the play will ever not be relevant. On top of that the music is so glorious it doesn’t ever feel dated.”

It’s One Final Hair-Raising Show in L.A. for Michael Butler