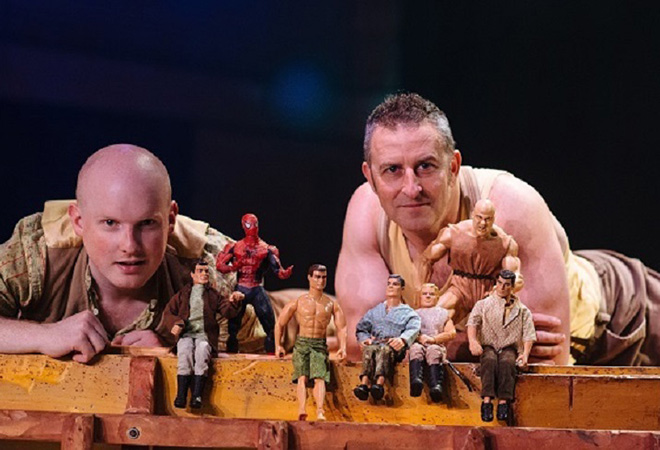 In a world where attention spans are getting shorter, the recently opened Wallis Annenberg Center for the Performing Arts is making their children’s theater a top priority. With the recent opening of the two-man show Jason and the Argonauts the venue has launched the first part of an ambitious plan to bring in children from all around the city.

The production of Jason, which comes from Visible Fictions in Scotland, uses a single multi-purpose cart, action figures, two actors, and a lot of physical comedy to tell the story of Jason and his pursuit of the Golden Fleece. Lou Moore, executive director at WACPA recently spoke about the challenges of capturing the imagination of school children and their families in the digital age. “There is a shorter attention span these days, there’s no question about that,” says Moore. “With Jason those children stay for 65 minutes pretty much glued. They would never do that at home or on the iPad. It really is a way to exercise imagination. Getting to do that live and watching these two actors totally improvise a show is terribly exciting to these young people. They’ve seen it in videos, but to see it live is exciting for them.”

As for why this production was chosen to launch the venue’s children’s programming, Moore explains: “First of all Scotland is one of the leading countries of children’s theatre. They really understand the audience and how to capture them. They know when to instill humor. They take you on a literary journey and they don’t talk down to the kids. It’s intellectual yet funny. As an adult, I was totally entertained—as were the children.”

Jason has a regular performance schedule, but additional performances take place during school days with students bussed in to see the show and participate in a Q&A afterwards with the actors. So far Moore is excited by the response. “I’m just amazed. They ask very intelligent questions. ‘What happened to Hercules? Why did you use a wooden rod instead of a fake sword?’ The idea that these guys used their imagination and let the kids use their imagination is again part of the stimulation and creativity.”

The next show, White is a parable about diversity aimed at 2-5 year olds. And in the coming years Moore hopes to have a bigger program in place. “On the stages I’d love to have two shows for 2-5 year olds, two for 6-8 year olds, something for teens, and on the main stage a family show. We are establishing a theater school for young people who can study and work with the professionals on our stage. We hope to have the school in full swing so we’d have children from 6-18 in classes year round.”

As school budgets get slashed, arts education is often among the first things to get cut. Do theaters have an obligation to fill in the gap? “I don’t know that I would call it an obligation as much as it is definitely something we all want to do. It saddens us that schools are so cut back,” Moore explains. “Arts in the school have diminished. The need is even greater than before because children aren’t getting it in school as they did in our day. I can tell your our donors and the donors for the LA Philharmonic and the Taper and others very much want to help children who don’t have this opportunity.”