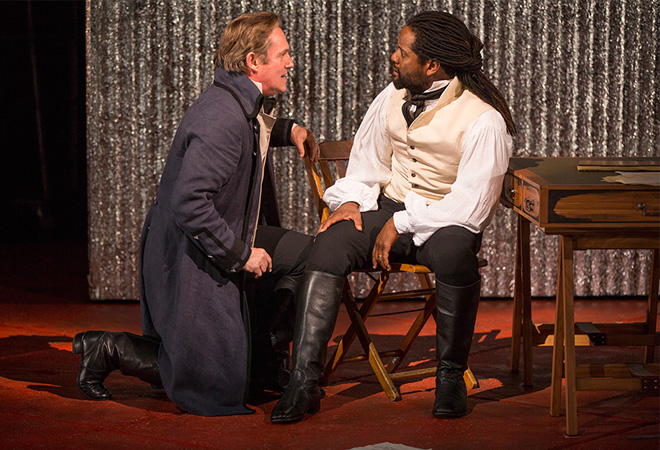 The list of fine actors who have played the villainous Iago in Shakespeare’s
Othello is a who’s who of theater royalty: Laurence Olivier, Jose Ferrer, Edwin Booth, Ian McKellen, and Philip Seymour Hoffman, to name just a few. With the new production that recently opened at the Old Globe in San Diego, you can add Richard Thomas to the list.

Thomas has performed many of Shakespeare’s plays including Richard II, Richard III, Hamlet, and Timon of Athens. He also appeared on Broadway in David Mamet’s Race and Michael Frayn’s Democracy. He currently appears on The Americans as Frank Gaad. But Thomas acknowledges how most people know him: “It’s going to be John-Boy dead at 94 when I die. That’s just the way it’s going to be.” Yes, The Waltons.

In this adaptation, Iago is passed over for a promotion by Othello (Blair Underwood) who instead chooses Cassio (Noah Bean). He uses the slight as motivation to engineer Othello’s downfall, suggesting to Othello that his wife, Desdemona (Kristen Connolly), is having an affair with Cassio. The story, akin to a medieval morality play about ambition, deceit, and manipulation, is among Shakespeare’s darkest.

“I’ve always wanted to play the part,” Thomas says outside the theater during a break in rehearsals. “I’ve always been fascinated by him. Iago is the kind of guy if you cut in front of him in traffic, he’s going to follow you home and destroy your car with a tire iron. He doesn’t need a reason to do the damage he does because the damage is already in him. One of the things I like about Iago and what I think is good about casting me is that he has a straightforward quality. He’s hiding in plain sight. I’m trying to play it as straightforward as possible.”

Before embarking upon the role, Thomas spoke to Ian McKellen about the part. “He said, ‘Oh, it’s so easy. It’s a good easy part.’ In some aspects I know what he means. Iago has to do a lot of heavy lifting but Othello has to do the emotional heavy lifting. But it was slightly disingenuous of Ian because, of course, Ian’s Iago was historic. His performance has been influential for a long time.

When asked to compare his Shakespearean roles, Thomas contrasts Richard III with Iago. “With Richard III, Shakespeare is writing iambic pentameter and the cadence is very clear. Iago is completely different in that he’s almost all prose, which is a different ballgame. In some ways it is more difficult in Shakespeare to find the rhythms in the prose. It’s edgier, more angry, less elevated diction.”

Thomas clearly relishes being on stage. “I do theater not for esteem but because it gives me pleasure. I feel different on stage than I do anywhere else in the world. I wish it had a more altruistic motive but it doesn’t.” He also has a few other Shakespearean parts he’d love to try. “I’d like to play Brutus [in Julius Caesar]. I want to eventually play Lear [in King Lear]. I have a lot of daughters. If people are crazy enough to ask me, I’ll do it.”

Beyond the joy on being on stage, Thomas finds satisfaction by being part of the company of actors who have performed Shakespeare. “To join hands with the actors who have played the repertoire is an incredibly thrilling experience. Get in the batter’s box, take a swing, and feel connected to the whole line of Iagos or Hamlets or Richards. There’s nothing quite like it.”