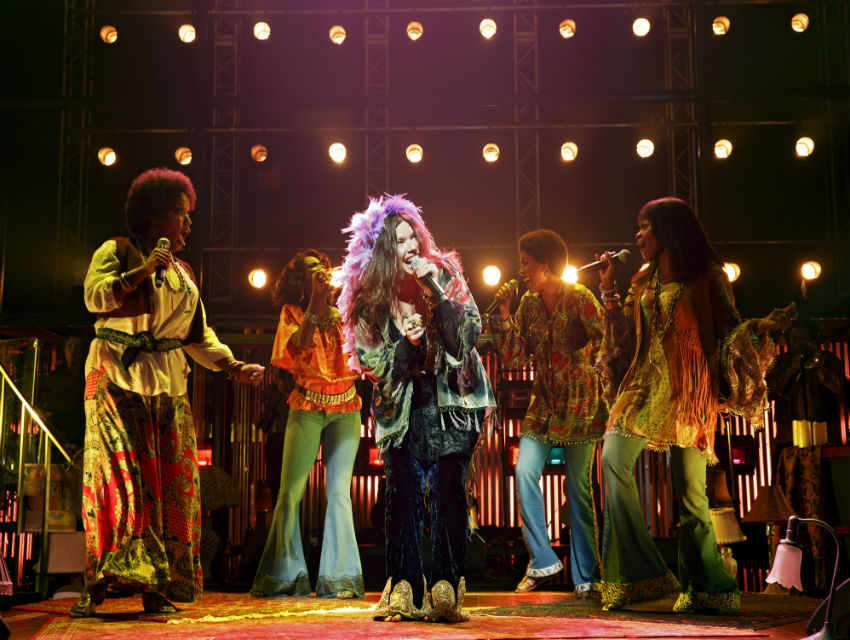 When A Night With Janis Joplin first played the Pasadena Playhouse in 2013, one patron wasn’t pleased to find Mary Bridget Davies playing the rock icon. “A woman came out at intermission and demanded her money back,” says Davies. “This is a night with Janis Joplin, this is Mary Bridget Davies. Where’s Janis Joplin?” Theatergoers won’t be asking that question when the show returns tonight to the Pasadena Playhouse as Davies reprises the role that earned her a Tony nomination for Best Actress in a Musical.

“She’s been dead for 40 years,” Davies laughs. “Where have you been? She was age appropriate. That made me laugh for days.”

Davies has been associated with Joplin for ten years by appearing first in Love, Janis. She was then invited to front Big Brother and the Holding Company (Joplin’s band) before embarking on A Night With Janis Joplin. “I’m not a Janis Joplin impersonator,” she says. “It’s just a character that’s near and dear to me. Being Janis, it’s just been something I love doing. It hasn’t gotten stale. I’ve been lucky. The exposure of being on Broadway got me connected with a great agency and management. I’m recording a new album of my own original stuff in Nashville and writing some killer songs. It’s all finally coming together. It’s falling into place.”

Joplin’s singing style was so unique, how has her style influenced Davies’ singing of her own material? “It’s informed me and my craft,” she reveals, “but it’s not the same thing. Maybe people could say any woman that is strong that can pull grit out of her voice, she’s got a Janis or Bonnie Raitt thing. We have to constantly label and make comparisons in that way. I love her, but she already existed. There doesn’t need to be another.”

Ten years performing as Joplin, Davies does feel that she has certain perspectives in common with her. “I do share a lot of her sentiments,” she offers. “For her it was terribly difficult being a woman in an all-male band. The climate is less unforgiving now. You’re the den mother and the wrangler and the front person and the man. She took a lot of heat for that. She was one of the first women to do that. It’s still a machine. I for one, have no intention of being a pop star. That was never in the cards for me because there’s so much self-compromise. You have to live it. It has to be that authenticity or no one’s buying it.”

When Joplin spoke of soul, she once said “You know why we’re stuck with the myth that only black people have soul? Because white people don’t let themselves feel things.” Does Davies agree? “I think it can be expounded upon. At the time she was on the money. I think people are lot more free with their emotions. It’s not viewed as a weakness as it might have been by her parents’ generation. You go to a funeral and there’s some sniffling and people are sad. I’ve had to go to wakes at a Methodist Baptist Church and people are throwing themselves on the casket. That’s so much better for you to grieve and that’s what Janis did. Culturally, 50 years ago, white people didn’t participate. It was Stepford. It was far more true then, but I understand what she was saying.”

Davies, who maintains an active and entertaining Twitter account, tweeted that she’d love to play Simone in Can-Can. “When Janis is done and my tour is satisfied, I’d love to be in a traditional musical. I went to see On the Town. I wish I was a guy so I could be one of the guys in the show. I would love to be in a real Broadway musical and wear a gown with sequins that weights 35 pounds. When your career starts paying off you become a contender. I would be so diminished if I couldn’t perform. That’s, when I came into this world, what I was ordained to do.”