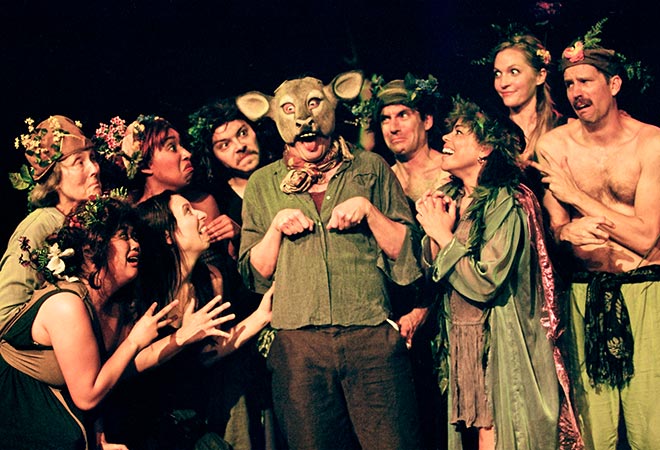 Last summer Culver City-based troupe The Actors’ Gang presented Shakespeare’s A Midsummer Night’s Dream to great acclaim. Earlier this year they went back into rehearsals to prepare for a tour to China and Italy. Before they take their show on the road to Brazil and Nashville (admittedly strange), director Tim Robbins is bringing the production back to LA.

Robbins is best known for his roles in The Shawshank Redemption, The Player and for his Oscar-winning role in Mystic River. He’s also directed Dead Man Walking, Cradle Will Rock and Bob Roberts.

“I had some fears about China,” he says. “We’ve toured with dramas before in foreign countries with supertitles, but we’ve never done a comedy before. I was a little worried about how the timing of what we were doing on stage matched up with the translations people were reading. We were getting laughs in places where we weren’t in the U.S. In both places, the play really sailed.”

One of the Bard’s most popular plays, Midsummer depicts two sets of mismatched lovers who attend the marriage and celebration of Theseus and Hippolyta. Frustrated by their situations, they escape to an enchanted forest where they encounter a duke, a duchess, woodland fairies, and actors. Puck, in an attempt to play Cupid, tries to make it all work out, but complications ensue.

Even if you saw last year’s production, this year’s version will look different. “It’s like a brand new show,” Robbins says. “We kept the scenic element very spare. We wanted to try to the play with just the lighting. We were able to achieve that because the actors had created the force out of their own movements and body. Everyone is on stage the whole time. If you aren’t playing a lover, you’re playing a fairy or part of the forest. Most people play four roles in the show.”

Not only are actors taking on multiple roles, some roles, like Puck, are being played by multiple actors. “We had three Pucks last year. This year I said I would like to try it so that everyone is Puck. It’s laid out there by Shakespeare that Puck is shape-shifting in his first speech, so it gave us license to make Puck everyone. I don’t know if anyone’s done it before,” Robbins says.

For Robbins imagination is key in an era when theater competes with multiple forms of technology. “We are living in a time with so many passive experiences with our devices and watching movies and pausing and doing e-mails. In a way it’s corrupted the form—unless you are in a theater. You can’t download theater. Theater is the last bastion where you have people in a room for two hours in a beautifully unique environment. That conglomeration of people and their relationship with what’s happening on stage is pure essence of theater.”

The Actors’ Gang also brings theater to prisons not with performances but by working directly with prisoners to help put on and perform the plays. “In a way we’ve stumbled into a great means of rehabilitation,” he says. “We are doing the same work with prisoners as we do in our own workshop. They take it seriously and work hard. They are able to tap into emotions they have never felt or haven’t felt for years. Prison is a hostile environment and the only appropriate emotion is anger. It’s not wise to walk around sad or happy or afraid. You wind up with 20 guys on stage sharing deep emotions and they create bonds that are more significant than bonds they have had in the past. That’s incredible when it happens.”

Robbins didn’t reveal details about the company’s plans once this tour is over. “We’re developing a piece for the fall that will run in October and we’re looking at an adaptation of [Edgar Allan] Poe for that. We have a couple things we are work-shopping right now.”

Before concluding our conversation, I had to ask the one-time hockey player his views on the Los Angeles Kings winning their second Stanley Cup in three years. After all, he spends a lot of time in L.A. these days. He hesitates before admitting, “I’m a Rangers fan, so that’s a difficult question. Whatever, you won. Get over it. So congratulations.”