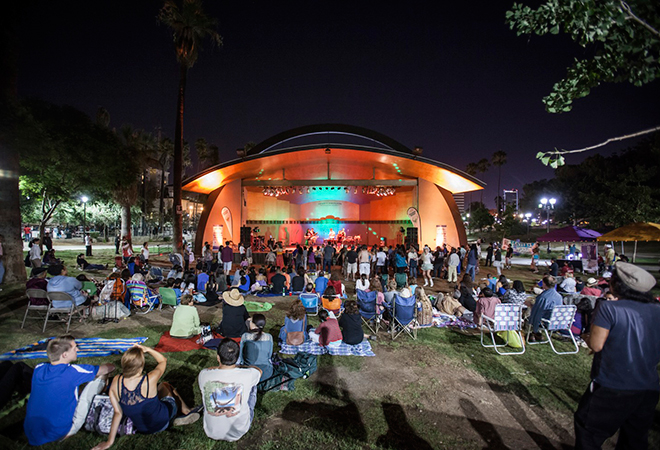 The Hollywood Bowl isn’t the only option for world class, outdoor concerts in Los Angeles. For 11 years people have been enjoying music in Pasadena’s Memorial Park while MacArthur Park has been home to a summer concert series since 2006. The summer season, which runs through the end of August, kicks off at MacArthur Park this weekend with Ozomatli. Next weekend jazz artist Barbara Morrison launches the Memorial Park season. In MacArthur Park, music fans will have a chance to check out acts like Mike B., Young Dubliners and Quetzal, while Pasadena puts a greater emphasis on jazz and still including world music and Americana.

Non-profit organization Levitt Pavilions oversees the programming for both venues as well as four others around the country. Liz Levitt Hirsch, chair of Levitt’s board of directors, explains that the goal is to create “a sustainable model of community enhancement through the experience of live shared music.”

The first venue was Pasadena in 2003. “Nobody had ever heard of Levitt Pavilions,” says Hirsch. “It was amusing. I was driving out for 8 a.m. committee meetings. I was putting together the binders to present to the city. I was out on the street passing out flyers because nobody knew there was a venue.”

Renee Bodie, who oversees the two Los Angeles venues and formally joined Levitt Pavilions in 2012, continues the story. “There would be 300 to 400 people and they didn’t quite trust what we were doing. It took a while to really trust that what we were doing was worthwhile. As that grew, the community grew and Memorial Park became a place to go.”

While that first venue was a challenge, it was nothing compared to the Los Angeles venue. “MacArthur Park was a real trial,” Hirsch says. “Let’s just say there were a lot of competing interests and there were many concerns that had to be overcome. It is also our most joyful triumph. The park has turned around, there’s a new soccer field, a new playground, new bathrooms, new lighting, and a new dance floor in front of the stage.”

Entertainment options abound in Los Angeles, and Bodie is keenly aware of the need to program aggressively. “Our opener in L.A. with Ozomatli [on June 8] is going to be fun,” she says. “We have Richard Thompson and Loudon Wainwright III. In Pasadena we are starting with Barbara Morrison. We have Pete Escovedo and David Lindley. Each park has a children’s series one night a week. We have incredible live music and it’s available to see it without a ticket.”

Beyond great music, Bodie explains another aspect of their mission. “We have a very active intern and volunteer program. We take kids in high school and college and teach them music production. They are with us 20 to 30 hours a week. We’ve been very successful in getting them jobs in event production.”

So how does Hirsch measure the success of a season? “I can see who is showing up on the lawn. Have we reached out to a diverse community? I’ve seen a lot of different people there. A rainbow. All ages. All races. We are reaching outside the parameters of our venues.” When asked the same question, Bodie tells a story about David Lindley’s reaction after his first appearance. “He said ‘I was sitting no the stage and I was looking out and there was a line of homeless people rocking out next to yuppies and a family. People were sharing an experience. It was really nice.”