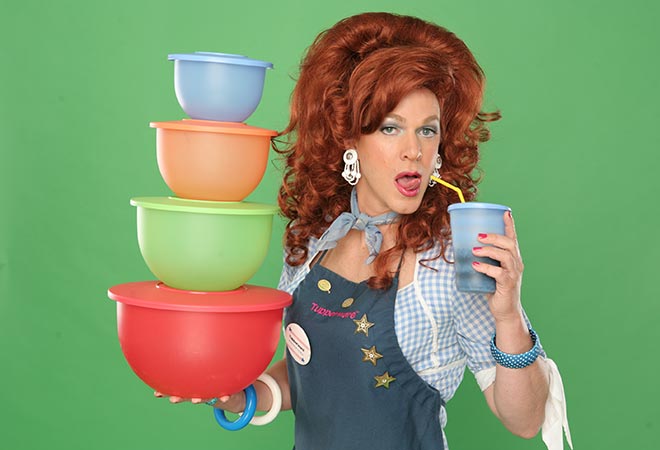 Dixie Longate has arrived in Los Angeles to share her unique Tupperware Party, which runs at the Geffen Playhouse through August 3. The Mobile, Alabama resident and mother of three (Wynona, Dwayne and Absorbine Jr.) has had a few brushes with the law, but after a faux crystal bowl was thrown at her head in 2001 she found the light. And an award-winning career was launched.

During her parties Longate talks about love, sex, cocktails, her personal life, and the meaning of happiness. We got her to go on the record about a few of the most burning issues of the day.

Given the gridlock in government, what advice would you give President Obama and Speaker of the House John Boehner?
I would tell them to serve more cocktails when they are at work. In my experience, when people drink together, they work better together. If Obama and Boehner were to play beer pong, they would really be able to set their differences aside. I remember when I was young and I would get in fights with my momma, as soon as she’d bring out a bottle of vodka, that problem was solved.

There’s the expression “Happy Wife, Happy Life.” What Tupperware products do you think Kanye West should give his new bride Kim Kardashian?
Ordinarily I would say that most women love the Tupperware can opener because it is like holding a piece of magic in your hand. But in Kim’s case, I think she needs one of our larger storage containers to keep all of her money fresh and organized. I mean, please, when is the last time she actually ate food anyway? Isn’t she just drinking her lunch most of the time?

How does your life in Los Angeles compare to your life in Mobile, Alabama? What do you enjoy doing while you are here?
Life in Mobile is simple and straightforward. Everything you need is just a hop, skip, and a spit away. Here it is a bigger, crazier, more glamorous city where drinks cost as much as a trailer payment and there aren’t as many country bars, but you still find that people are really neighborly and are more than willing to have sex with you behind a dumpster.

Emmy nominations were announced last week. As someone who was a second place Tupperware representative, what advice do you have for all the people who won’t be going home with trophies on Emmy night?
See if you can make out with another celebrity who loses. What do we love to watch more than people congratulating themselves with an award in their hands? Two people from different TV shows making out in the corner when they think no one is watching. It’s a hell of a lot more interesting than listening to someone thank the crew of a show that you can’t even seem to find on your TV. What’s more fun than watching someone from Nashville make out with someone from Downton Abbey? Nothing!

If you could put together an all-star version of a Tupperware Party here in LA, who would you invite?
I would love to have people like Brad and Angelina there because they have so many mouths to feed and would probably buy a ton of Tupperware. And The Rock because I want to see if his big hands can open some of our tiny bowls. George Clooney because he is George Clooney. And Sandra Bullock because I know she is friends with George Clooney and if she comes, he is much more likely to show up. And Steve Martin because he just makes me giggle and I’m sure he would show me things about Tupperware that I didn’t even know. And definitely Tatiana Maslany who plays all those different clones on Orphan Black because even if she is the only person who came, it would be a full party. And maybe Diana Ross if she isn’t busy because I want to see how she gets her hair through a doorway.

What’s your view of the recent Supreme Court decision exempting Hobby Lobby for paying for contraceptives in its health plan?
Well, first let me say that I love arts and crafts. There isn’t a day that goes by that I am not knitting a shawl while I am doing a paint-by-number while I am scrap-booking baby pictures. I think most women are like that. We all juggle multiple projects to keep from getting too bored. Having babies slows people down and stops us from doing as many projects. Why on Earth would Hobby Lobby want people to stop doing so many projects? I mean come on. It is hard to crochet an afghan when you have a baby over your shoulder spitting up on it. To me, I think Hobby Lobby should rethink that decision and even create a baby-free zone where you can come to do needle point in peace without all of those whiny babies stuck to your leg. Can I get an amen?

Any beauty tips you’d like to pass on to the women of Los Angeles? Or to the men?
Luckily, Jesus was in a good mood when he made me so I came off the rack kind of pretty. Just lucky I guess. I just wear a light dusting of powder to keep my face from being all shiny. But walking around L.A., I really have to say that people here are gorgeous. In Alabama when I am walking around, it’s kind of a banner day when you come across people that have more teeth than you can count on one hand. Here, everyone looks like a cover of a magazine that came to life. I mean sure, sometimes that magazine might be Crazy Town Monthly, but that is still a magazine.

Do you have any suggestions on the ongoing crisis in the Middle East?
Wear fewer layers. Lord, have you checked the weather app on your phones lately? Try it. Change the location settings on your phone to the Middle East and then check the weather. It is about 140 degrees and it is dusty. Why would you ever want to wear a robe over a dress draped in a sheet covered in an afghan finished with a shawl? It’s too hot. I mean, look at Jesus. He lived in the Middle East and he wore one robe. ONE ROBE. It was cotton and drapey and he always looked happy. Take a lesson from Jesus. Just wear a single long T-shirt. Belt it if you want to give it some style, but no more layers.

How can Tupperware bring about world peace? Or is it better for whirled peas?
I think if you put all of the above answers together, you can clearly see a map for world peace. Fewer layers, more booze, sex tapes, equal rights, empower people, let’s watch more Emmy losers make out, and occasionally blot with some powder to keep the shine down. Oh and let’s get Justin Beiber to host a Tupperware Party. If all this happened, the balance of nature would be restored.