Home Theater Curtain Call: The Not So Lush Life of Bettye Lavette 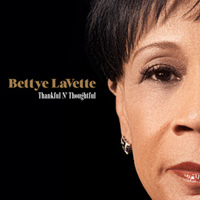 Not many singers who have a hit song at the age of sixteen are still performing at the age of 68. Even fewer still could suffer the incredible highs and lows that Bettye LaVette has experienced and still be, as her new album is titled, Thankful N’ Thoughtful. On Saturday at the Broad Stage in Santa Monica, the resilient, big-voiced soul singer will perform a selection of songs from her five-decade career.

“My Man – He’s a Lovin’ Man” was a hit for LaVette in 1962 when she was a teenager from Detroit. Her personal and professional lives careened wildly for the next forty years. She followed that with popular singles like “Let Me Down Easy” in 1965 and “He Made a Woman Out Of Me” in 1969, but she never broke big the way Aretha Franklin or Diana Ross did. Battles with alcohol and drugs followed; rollercoaster relationships with other artists, producers, pimps, and drug dealers didn’t help. Instead of living in the limelight, LaVette found herself struggling to make ends meet.

Things started to turn in 2005 when punk-centric label ANTI- Records “rediscovered” LaVette and began releasing new recordings starting with I’ve Got My Own Hell to Raise. Her fan base expanded and she found herself with two Grammy Award nominations. In 2008, LaVette was invited to perform “Love Reign O’er Me” for Roger Daltrey and Pete Townsend at The Kennedy Center Honors. Despite all these ups and downs, or maybe because of them, LaVette remains brutally honest. “It’s a business always designed for the youth but respectful for the elderly or people with seniority,” she says while sipping a glass of champagne the day before her 68th birthday. “All they are doing in the business is acknowledging me, but it isn’t opening up to me so I can get to anyone else. I know more musicians than I’ve ever known in my entire life. It’s happening with me not happening to me.”

On Thankful N’ Thoughtful LaVette sings songs by Sly & The Family Stone, Bob Dylan, Tom Waits, Neil Young, and others. She explains her selection process: “It depends, baby, on what reason you are choosing them. I haven’t been able to figure out what sells. When I like a song, I sing it. My career wasn’t working so at some point I had to decide: Can I not sing because I’m not in favor with these people? Or have they not found me? I realized I couldn’t depend on the public to tell me.”

Her favorite song is Billy Strayhorn’s “Lush Life.” “I’ve spent a lot of time on it,” La Vette says. “My manager used it as a tool to terrorize me, especially when one of my records sold 25,000 copies. He’d say ‘There are 25,000 more people who know you can’t sing.’ He held it out to me as a bar to reach for a woman with a voice and a big booty. He said, ‘You may never be a star, but you can sing for the rest of your life and make money at it. But you have to be good and you have to know a lot of songs and you may not have one hit record.’ I took great pride in learning to sing ‘Lush Life.’”

When asked what she plans to perform at The Broad she replies, “I don’t know. I have so much to do before that. I’ll get there and see. We have a basic structure. Ten years ago it was a trying proposition. Now I have enough songs I can do whatever the venue calls for. I’m doing something from all five decades of my 50 plus year career.”

In her autobiography, A Woman Like Me, LaVette tells her story with little regard for vanity or ego. When off-stage, she lives with her husband in New Jersey. “I come up here to be very quiet right now. I started so young. I’m so many different things. My grandchildren are used to me being high. They weren’t used to me being on the stage until just ten years ago. They just knew their grandmother sang. When my entire ‘yesterday’ was revealed, they became my staunchest fans. They don’t think I’m Betty LaVette. They think it’s their grandmother who owns Bettye LaVette.”

Having survived over 50 years in the business, is she thinking about her 60th anniversary? “I can’t imagine. I hope by my 60th anniversary in this business I will make a third step. The first was in 1962 signing to Atlantic. The second was with my new label. I need to make another step. I want to be playing venues like the Carlyle and appearing in performing arts theatres. That’s all I’d wish for for the 60th year.”