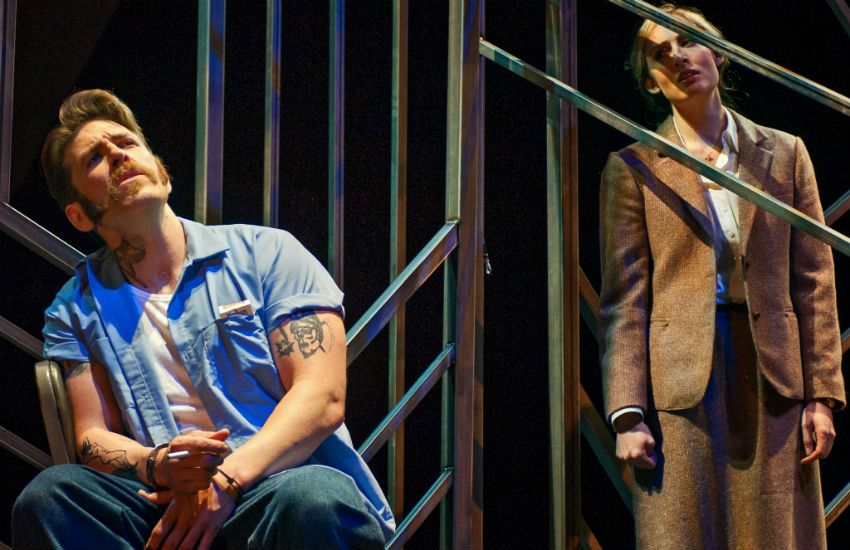 The death penalty is a polarizing subject in America. But when Sister Helen Prejean’s story of dedicating her life to working with death row inmates became a best-selling book, Dead Man Walking, and then an Academy-Award winning film with Susan Sarandon and Sean Penn, somehow the subject took on a more human face for both the victims and the criminals. It’s not, however, the first subject you think of for an opera. Which may be why librettist Terrence McNally and composer Jake Heggie wrote what has become one of the most performed new operas of the century. In a new streamlined production, Dead Man Walking will be performed this weekend at the Broad Stage in Santa Monica.

“When I went to New York, I was sent there by my boss at the San Francisco Opera,” says Heggie. “He pulled me out of the PR department and sent me to meet with Terrence McNally. It was his wish for the millennium to do something celebratory and bubbly. Terrence wasn’t interested at all in that kind of project. He wanted to do a serious American drama. When he told me Dead Man Walking all the hairs stood up and I knew it was the right idea.”

The opera premiered in 2000 as planned in San Francisco. Subsequent productions have taken place in various parts of the United States and also in Australia, Canada and Europe. The production appearing at the Broad Stage is performed by Opera Paralléle.

“I’ve seen it done a few times with smaller ensembles,” Heggie offers. “This is the most spare I’ve seen and somehow because it’s a smaller theatre and pared down you get the human drama more than ever. It feels more visceral. You feel like you are experiencing the story in real time. It can touch your heart in ways that will surprise.”

Sister Prejean recently said when speaking at the University of Dayton that “opera is just a spiritual invitation to go deeper.” Heggie was touched by her comments. “She didn’t know much about opera until her story was turned into one. She has an enormous appreciation for it now. I hope that opera is an invitation to a deeper reflection on something, to reflect on things you hadn’t taken the time to do before. The death penalty is sort of the abstract. When you sit and really reflect on it and see a human drama unfold in front of you, that’s a very different experience.”

As for his own views on the death penalty, Heggie reveals his own journey. “Before I wrote it, I didn’t reflect on it either. I went into it very deeply. I didn’t want to impose my personal feelings at all. My goal is to empathize with every single character and not judge them and get their story out there the best way possible. We are all capable of enormous good and enormous evil. Does repeating the worst behavior of a criminal and putting that onto them solve anything? Does that make us better? Who has all the answers?”

With Sister Prejean as its central character, Heggie believes Dead Man Walking has the right person to ask all these questions. “If you look at most operas, there’s usually an intimate story at the heart of it. Something where the emotions are so big that it makes sense for characters to sing and sing in a way that fills an opera. She’s so real and genuine and she’s walked the walk. She’s gone places most of us can’t imagine going. She has great empathy and sympathy for both sides. She’s a wise remarkable woman.”